Round 10: Brian Davis vs. Jens Thoren

Neither player was particularly happy with their draft, considering the shenanigans their neighbors were pulling. Numerous color switches around them forced them into less-than-optimal positions. They made the best of a bad situation, though, and emerged with quality piles of cards. Thoren was green-red, and Davis was green-black, having shifted out of red late.

In the first game Davis almost stalled on lands, but a cycled Barkhide Mauler got him his third, a forest he desperately needed. He played Severed Legion in the face of Sparksmith. Thoren played a face-down creature. Davis swung and played Cabal Archon.

And that's when things went really badly. Thoren swung in and Davis let it in. Thoren flipped it over to be Skirk Commando. That mean that the Sparksmith could off the Archon, and the Commando took out the Legion. 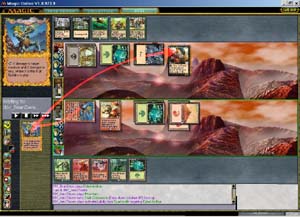 (click to open full-size in a new window)He kept his game face on, but had no play on his four lands. Thoren brought the beats and played Elven Riders. Davis thought hard before throwing down Snarling Undorak. Thoren had no Pinpoint Avalanche like he feared, but still traded his Commando for it with the help of the Sparksmith.

Davis was already contemplating his doom, Blackmailing away Symbiotic Elf and playing Cabal Archon before he realized that his Stag Beetle was still in play. Thoren had mistakenly morphed after combat damage was on the stack. It was a thin ray of hope for Davis.

It was quashed almost immediately as Thoren won the flip to keep his Valesk unmorphed. Even though Davis had Wirewood Pride to save his Beetle in Combat, he had no answer for the Elven Riders. 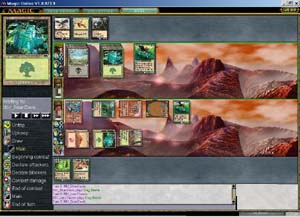 (click to open full-size in a new window)Thoren led with Sparksmith again in the second game, earning a disgusted shout from Davis. He cycled Solar Blast to take down Davis's morphed Cabal Exectutioner, then dropped Skirk Commando to take out Cabal Archon.

Davis was less than delighted. His Wellwisher did two to Thoren as the Sparksmith killed it. Thoren also made Elven Riders. Davis made a Wirewood Savage, and cycled Primal Boon to keep it out of the Sparksmith's clutches. He got to trade with the Skirk Commando for his troubles.

But Thoren was far from finished. He added a morph creature and Goblin Sledder. Davis tried fooling him with a morphed Snarling Undorak, but that just forced out a Shock. Stag Beetle would at least hold the fort, but the Elven Riders were dragging Davis down quickly. The last straw was when Thoren played a Stag Beetle of his own.

"He's got a Stag Beetle too?! That's like the best card I've drawn!" - Brian Davis

It was over right after that.