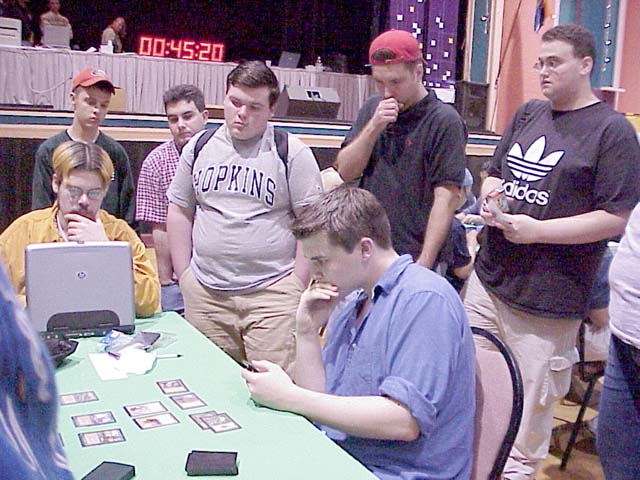 Brian KiblerConstructed mastermind Brian Kibler showed off his impressive limited skills to start Grand Prix: Tampa. He sat across from his opponent Antonino De Rosa in a battle to see who would win the pod, and leave the round as the last undefeated player. Surprising trivia from Kibler was shared before the round, and it was revealed that this day two is only the second limited Grand Prix day two to his credit. He drafted a Green White deck that splashed blue for Repel. Randy Buehler reported earlier in the day that Kibler's draft deck was a lost opportunity, and this was the perfect chance to prove him wrong. Antonino went with a proven powerhouse in Odyssey Block Limited, and drafted Red Green. Wild Mongrel, Chainflinger, Petravark, and Rabid Elephant set the tone for an slaughter, while Seton's Desire made his already big monsters even bigger. Antonino also wanted to say hello to all of his friends in Italy.

Kibler won the die roll and opted to play first. Both players kept their opening hands, and Antonino drew first blood with a Wild Mongrel. Kibler drew his card and laid down an unimpressive Pilgrim of Virtue. De Rosa swung with the dog, and laid a Diligent Farmhand and Seton's Scout. Seemingly unfazed by all the creature shenanigans on De Rosa's side, Kibler played an Aven Cloudchaser and took to the skies. Antonino continued to pound away with his Wild Mongrel and a Petravark signaled the beginning of the end for the Pro Tour heartthrob. Without the plains that the 'Vark took from him, Kibler was hard pressed to answer back with pressure of his own. He drew, sighed, took a long look at his hand, and passed turn. Seton's Desire was wind milled onto the Wild Mongrel, and suddenly the game was in danger of getting completely out of hand for Kibler. Acorn Harvest gave Antonino more ammo, and he passed his turn. Kibler ripped a Plains of the top of his deck, and the second Aven Cloudchaser destroyed the Seton's Desire. De Rosa took his turn and swung with the Mongrel. After mulling his options, Kibs triple blocked the dog, and De Rosa pumped the hound to a 4/4. The damage assignments decimated Kibler's air force, and Minotaur Explorer was conscripted to join Antonino's army. Kibler answered De Rosa's impressive turn with an equally unimpressive Springing Tiger, and succumbed to the power of Antonino's team during his next attack phase. 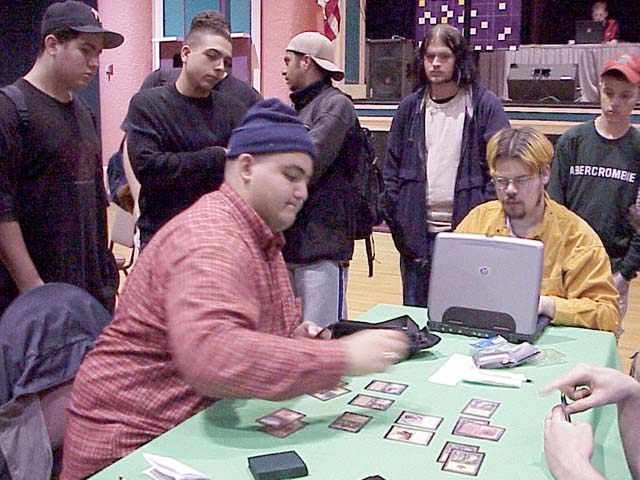 Antonino De Rosa Kibs decided that he wanted to play first this game, and after drawing their hands, both players were off to the races. No play was made until the fourth turn, and Kibler slams down the Aven Cloudchaser. Petravark takes Kibler's only forest and it looked as if this game was over before it really started. Militant Monk, however would have a lot to do with that. Antonino swings with the Petravark, and played a gem in Rabid Elephant. Another Militant Monk would join the Dragonmaster's team, and it seemed as if the game was slowly working itself into Kibler's favor. Chainflinger came off the top rope to swing elbows, and again, Kibler was forced into the corner. After ridding the table of the Monks, De Rosa blew the game wide open with a Nantuko Cultivator. As a last resort, Kibler plays Rites of Spring, rips apart his deck and dreamed about how good it could have been. Nantuko Calmer comes to the plate, but it alone was not enough to stop the lethal damage of Antonino's full strike next turn.

Final Result: Antonino De Rosa wins the match and left the table as the last undefeated player in the tournament. He is in a very good position to make Top 8, and Kibler will have to work a little bit harder in order to do so.

1 Rites of Spring 1 Roar of the Wurm