Round 10: Brian Kibler vs. Jack Stanton 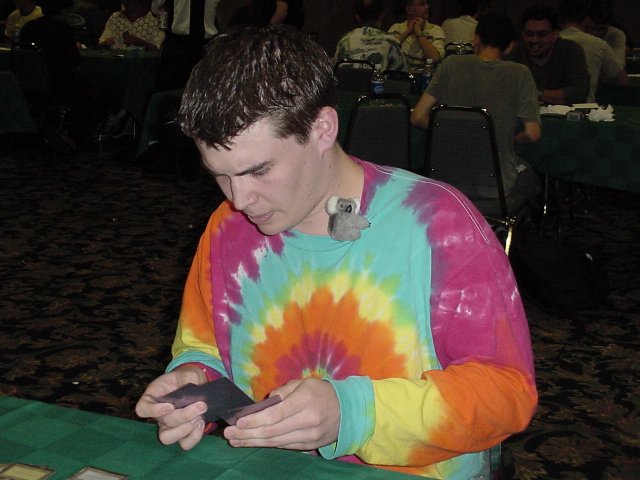 Brian Kibler's Dark Domain deck has drawn a lot of attention this weekend. Kibler has been working on Domain since back before Pro Tour Tokyo. He had some bad luck in Tokyo, but he felt vindicated by the results of the Barcelona Masters Series (which was also IBC) because his friends did well running his Domain design. Now that Apocalypse has come out, Kibler is still working on Domain. His latest technology is to run a significant amount of black mana so he can support Planar Despair. Kibler and Steve O'Mahoney-Schwartz each went 6-1 with the deck on day 1 and no one else ran it. Their record in the first two rounds of day 2 isn't quite as impressive - 1-1-2 - but Kibler points out that he had his last opponent Legacy Weapon locked at zero permanents, but couldn't kill him before time expired.

Kibler's opponent in a round 10 feature match was Jack Stanton, running the same red-black-blue control deck that got his buddy Sammy Batarseh to 7-0 on Saturday.

Kibler had little trouble establishing a full domain in game 1 - he even Harrowed sacrificing an Island that Stanton had tried to Ice to deny Stanton a card. Kibler tapped out to try to force through an Allied Strategies, but Stanton had two counters. With Kibler tapped out, Stanton got Crosis, the Purger into play. However, Stanton was unable to stop Kibler from playing Collective Restraint followed by Global Ruin followed by Allied Strategies for 5. It took Kibler quite a while to find a Spiritmonger, and even then Stanton had a Nightscape Familiar to block it. Fact or Fiction and then Allied Strategies for 5 more finally found a second Spiritmonger and it was all over but the chump blocking. 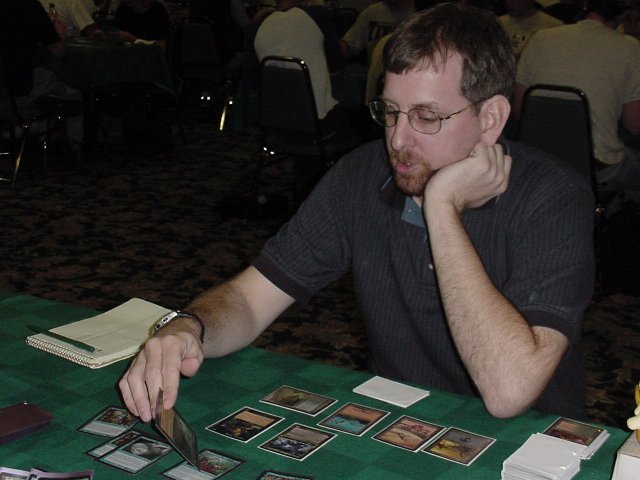 Between games Stanton was lamenting the fact that he had voted for Kibler for the Invitational earlier this week. Kibler busted out turn 3 Destructive Flow. Luckily for Stanton, his draw included several basic lands and the Flow didn't completely wreck him. Only one of them was an Island, though, so Stanton couldn't stop Kibler from getting rid of all his permission with a Lobotomy and a Void. Knowing that the coast was clear, Kibler followed up with Spiritmonger. Legacy Weapon and Global Ruin made sure nothing went wrong and Kibler spent the rest of the game just playing to the crowd, giving Stanton all 5 cards from Stanton's desperation Fact or Fiction because it just didn't matter.