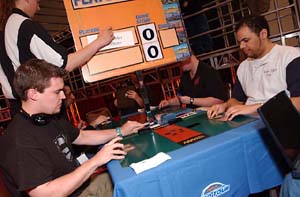 Lebedowicz started asking Kibler to take off his headphones while shuffling, and Kibler refused, noting that he couldn't hear what Osyp was saying. Lebedowicz kept joking around, telling Darwin next to him that he beat Kibler in New Orleans even when he mulliganed to five. Even reporter Brian David-Marshall got in on the act, as everyone started telling stories about Kibler when he (apparently) couldn't hear what they were saying.

Lebedowicz started off with a morph creature and a Goblin Clearcutter, and Kibler played his first creature of the game in Vile Deacon. Shock killed the Deacon to clear the way for an attack, and the Clearcutter helped bring out a fast Symbiotic Beast, which was followed by Timberwatch Elf. Kibler build up some defense, summoning Daunting Defender and Daru Healer. Patron of the Wild and Wirewood Herald on the same turn let Osyp attack without fear since Timberwatch Elf could pump for +3/+3. Both of Kibler's creatures blocked Lebedowicz's morph, and the pump brought down the Defender, while the morph survived, which Kibler seemed to have missed. It didn't matter since the board position was very hard to recover from, and Kibler conceded a turn later.

Lebedowicz- "I have no idea what you're talking about right now." 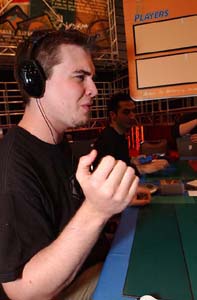 Lebedowicz- "We were at a bar in New Orleans, and a girl signaled to Kibler. He says, 'Yes I am Brian Kibler', and she just wanted to walk by."

Kibler had a morph creature, while Lebedowicz played Timberwatch Elf. Vile Deacon was matched by Goblin Clearcutter. They traded in combat, since Cruel Revival killed Timberwatch Elf in response to it being activated after damage went on the stack. Both players had one morph creature at this point, and Kibler played Shieldmage Elder a turn later. Lebedowicz's morph was unblocked, and flipped over to reveal Skirk Commando, killing Kibler's morph (Sootfeather Flock). Kibler untapped and played Starlight Invoker, giving him more defense and an Elder ability waiting to be used.

Lebedowicz played a morph and Wirewood Elf, while Kibler played his own morph. With the board locked up, Kibler was getting further and further ahead by gaining five life a turn with the Invoker. Eventually Lebedowicz decided it was enough, and attacked with all his creatures, provoking Shieldmage Elder with Krosan Vorine. A Goblin Taskmaster flipped up, and pumped the Clearcutter. Patron of the Wild unmorphed as well, and it seemed that combat would work out reasonably for Lebedowicz until Kibler unmorphed Wingbeat Warrior to give his Elder first strike, killing the Vorine. Daru Mender and Sanctifier morphed up as well, and would not only survive combat but would provide two Elder activations. Gempalm Incinerator was cycled in response, killing the Elder.

The board was now just about even, but Kibler had Wingbeat Warrior attacking in the sky for two. He played Battlefield Medic, and Osyp attacked, which resulted in the Commando trading with the Mender, and Taskmaster pumping itself a few times to get through for extra damage. Needleshot Gourna could have stopped the Warrior, but Osyp couldn't afford to sit back and let Kibler gain five life a turn. It attacked once, but when Daunting Defender locked up the ground, Lebedowicz had to stay back on defense.

This made the game slow to a crawl, with nothing happening but Kibler's life total increasing by five a turn, and Lebedowicz's life total increasing by three a turn thanks to Wellwisher. Kibler played a Vile Deacon, and it got through as a 7/7 monster. On its next attack, it was chump blocked by Symbiotic Beast. The Deacon was chump blocked by a tiny creature every turn, as both players kept gaining more life. At this point Lebedowicz conceded, since he had less cards in his library. 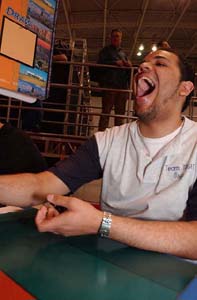 Lebedowicz accelerated with a turn two elf, and turn three Clearcutter. Kibler had Starlight Invoker and Daru Healer, played face up. The Clearcutter got through for three damage, Shock killed the Healer, and Timberwatch Elf made Lebedowicz's board even better. Crude Rampart wasn't too good, since it would trade in combat with the Clearcutter. It got through once, but the second time Kibler blocked with the Rampart and Invoker, looking for a trade. The Elf pumped an unblocked Murlodont instead, while the Clearcutter traded with the Invoker. Cruel Revival killed the Timberwatch Elf, but it didn't matter. Kibler was at seven, and died to Searing Flesh.