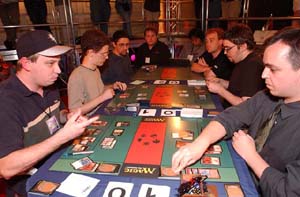 With just three rounds left in the Swiss, the pressure was really starting to build at Pro Tour New York. The Car Acrobatic Team - which finished second last year - was right in the thick of things and undefeated on the day. Monkey Dog was also 2-0 and with all the Grudge Matches being won by Neutral Ground, is it any surprise that Brian David-Marshall's team is the store-owner threatening to make day 3, and not Rob Dougherty's?

Both teams had a plan in mind when they sat down to draft and pretty much stuck to it. CAT likes to have Andrew Cuneo draft green in the middle seat, Andrew Johnson drafts blue-black-something on the right (he's splashed each the three other colors once in the first three rounds), and Aaron Forsythe drafts black-red (often with a splash of white) in the traditional black-red seat. Monkey Dog likes the same archetypes, but they prefer to have Eric Kesselman draft green on the left and Brook North plays blue-white-splash-something (usually red) in the middle.

A couple of packs presented the teams with tough decisions. Kesselman had to choose between Nightscape Master, which would be amazing in Aaron Forsythe's deck, or a solid exclude for his own deck. Brian David Marshall started choking himself in an effort to convince his teammate how tough it would be for him to play against the Master. Kesselman couldn't handle the double-colored demands of the Master so he took Exclude. Forsythe's deck then got even scarier when he busted open a Blazing Specter from the next pack.

David-Marshall opened an insane pack in Planeshift and I'm not sure anyone has ever felt worse about opening up Tahngarth. The Talruum Hero was accompanied by Flametongue Kavu, Stormscape Battlemage, and Hunting Drake. David-Marshall took Tangy and each member of C.A.T. proceeded to draft a Nekrataal for his deck.

In the end, Forsythe wound up with a nice Red-Black-white deck. He's even got a pair of Dega Disciples, which can be quite naughty when you have access to all three of those colors. He drafted a pair of Phyrexian Bloodstocks, but only got one Aurora Griffin to combo with them (and has the only white creatures in his matchup) so he left them on the sideline. His opponent is David-Marshall, who likes to stick as close to two colors as possible and pulled it off this draft. However, BDM's 2-color aggro deck has very little removal and he could be in trouble in Forsythe draws Blazing Specter or Nightscape Master. 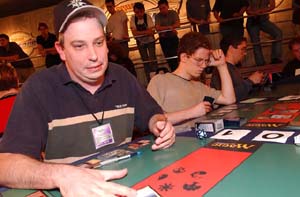 Cuneo has 5-color green with multiple Battlemages and a solid aggressive green creature set. He wound up with very few spells (not counting mana fixers) and his deck is basically "monsters plus a Consume Strength." He'll take on Brook North, who managed to survive into Apocalypse with only an Armadillo Cloak as a good card that wasn't blue or white. He thought about splashing black, drafted a Vindicate, but then got Suffocating Blast so he went red. He wound up with two Blasts and a Razorfin Hunter.

Johnson is running a controllish blue-white-black deck against Kesselman's 5cg. Their decks are really a stark contrast and it will be interesting to see which team's basic plan works out better. Or maybe it's just a match to see whether CATs or Monkeys are better players.

Kesselman got all tricky when Johnson played an early Probe with kicker in their first game. he discarded his Tsabo's Assassin (which he didn't have the black mana to cast) and then brought it into play with the black side of Life/Death. Johnson spoiled his fun by killing it with Defiling Tears. Kesselman never did draw a mana fixer and couldn't play any of the other spells in his hand either so Johnson was able to finish him off fairly quickly. North also had mana problems and also only managed to play only one spell before he beat him. About this time David-Marshall destroyed Forsythe's Emblazoned Golem with a Smash. Forsythe announced "I just got smashed" and Kesselman answered "unfortunately, so did we."

The amazing Planeshift pack that still had the players buzzing during deck construction played itself out during the David-Marshall/Forsythe match. Forsythe was looking good early thanks to Flametongue Kavu, but BDM destroyed him with Tahngarth and got a game win for Monkey Dog. 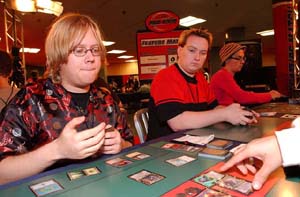 Johnson and Kesselman played a real game in their second try. Johnson played a Volcano Imp and played Ordered Migration for 3. Kesselman attacked back on the ground as hard as he could. The race was tight, especially when Kesselman played Vodalian Serpent with kicker, but Johnson had just enough chump blockers to survive Kesselman's last attack phase and the Acrobats took a one match lead.

North chose draw for game 2 and Cuneo punished him for it by coming out very aggressively: turn 1 Ana Disciple, turn 2 Nomadic Elf, turn 3 Penumbra Bobcat. North was mildly color-screwed (he didn't have white until turn 5) and he was never quite able to stabilize. Sunscape Battlemage took out a flying blocker and forced North into chump-block mode. Soon the Car Acrobatic Team had moved itself to 8-2 and was threatening to put up a second straight Top 4.

David-Marshall did claim his own match, using Backlash to deal the fatal damage in Game 3.