Round 10: Carlos Romao vs. Damian Hiller 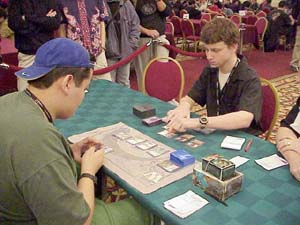 This interesting Feature Match pitted Grand Prix: Buenos Aires Champion, Carlos Romao, against Amateur Damian Hiller. Both players were playing similar Go-Mar decks with Desolation Angel, but one of the main differences in their decks is that Romao is running 3 main deck Lobotomies, while Hiller is running Gerrard's Verdict instead. Hiller won the die roll, and chose to play first.

Romao chose to take a mulligan, and the game started with opposing dual lands from both players - a Coastal Tower and a Salt Marsh. Romao took a deep sigh as he realized that this match take a while, and on Hiller's 3rd turn, he played a Vindicate on Romao's Salt Marsh, which proved to be a devastating play, as Romao missed his next land drop, leaving him with only a Swamp in play. Hiller played a Spectral Lynx the next turn, and Romao missed yet another land drop, and had to discard an Exclude. Hiller attacked with his Lynx and passed the turn, and Romao banged on the top of his deck asking for a land; as the saying goes, those who ask, shall receive. He played a Plains and then a Spectral Lynx, but Hiller had a Dromar's Charm for it. On Hiller's next turn, he played a Gerrard's Verdict, and Romao discarded an Absorb and a Fact or Fiction. Romao played another Lynx on the following turn, and during his end step, Hiller cast a Fact or Fiction, revealing 2 Plains, 2 Meddling Mages, and an Opt. Hiller took the Opt and the Meddling Mage, and on his following turn cast a Meddling Mage naming Vindicate. Romao was still stuck on just a Plains and a Swamp, but his Spectral Lynx appeared to be holding the fort. Hiller played a 2nd Spectral Lynx, and yet again Romao missed his land drop. Hiller attacked Romao to 12 and played a 2nd Meddling Mage naming Rout, and on the following turn Romao finally drew a Blue Source in the form of Coastal Tower. Things were not looking good though, as Hiller had an extreme land and creature advantage. Romao tried to cast a Dromar's Charm on a Spectral Lynx, giving it -2/-2, but Hiller had an Absorb. A few turns later, Romao conceded.

Both players had quite a few cards that they wanted to side in against each other. Romao had Benalish Heralds, Unnatural Selection, Gainsay, and Disrupt, while Hiller had Gainsay, Lobotomy, and Disrupt. Both players were hard-pressed to fit in all the cards they wanted, and were even forced to take out a few Opts and Fact or Fictions. 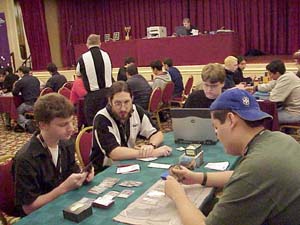 Romao chose to play first for the 2nd game, and both players kept their hands. Romao played an Unnatural Selection on the 2nd Turn, and tried for a Meddling Mage on the 3rd turn, but Hiller had a Gainsay. Romao missed his 3rd Turn land drop, but drew a Salt Marsh and then a Plains on the next 2 turns. Over the next 4 or 5 turns, both players drew and said go, with Romao only having 5 land in play to Hiller's 7. Finally, Hiller played a Spectral Lynx, which Romao Excluded, but this allowed him to play a Lobotomy without Romao having any way to Counter it, and Romao showed Hiller his hand of Absorb, Spectral Lynx, Fact or Fiction, and Vindicate. Hiller chose to take the Absorbs, and on Romao's next turn he played a Spectral Lynx. During Romao's following end step, Hiller cast a Fact or Fiction, revealing Rout, Meddling Mage, Fact or Fiction, Salt Marsh, and Island. He decided to take the pile that contained the 2 lands and the Fact or Fiction. Hiller had 8 cards in hand on his next turn and had to discard an Island, while Romao continued serving with his Spectral Lynx. Hiller cast the other Fact or Fiction, revealing 2 Gainsays, Dromar's Charm, Meddling Mage, and Coastal Tower, and Hiller decided to take the pile that contained the Mage, Gainsay, and Land. Hiller was slowly getting a huge land and card advantage over Romao, and with 10 cards in hand, decided to finally play a Meddling Mage, which Romao let resolve. Hiller named Dromar's Charm with the Meddling Mage, and then he had to discard a Death Grasp due to once again having too many cards in hand. On Hiller's next turn he decided to go for it with a Desolation Angel with kicker, with only an Island and a Swamp open; Romao, with his Absorbs removed and the Meddling Mage naming Dromar's Charm had nothing to do in response except Spite/Malice the Meddling Mage and frown. Romao untapped, shook his head, and scooped.