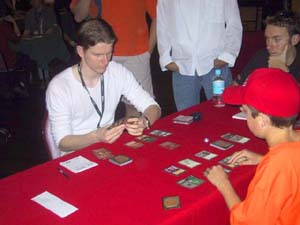 Cole is possibly the most well known of all the New Zealand magical card players. He won the limited champion title at this years nationals in New Zealand and he frequently makes the trips across to Australia whenever there's a GP on. Chris is not quite as well known throughout the magic circles of Australia but he is a respected figure in the magic circles of his hometown in Melbourne, Victoria. He rarely plays magic other than with his brother Rob, who is of course our Australian national champion, and Rob admits that if he really took the time he too would be an excellent player.

After winning the die roll with a perfect 20 and electing to draw, Swannack started with a mulligan, replying to Nadebaums second turn Mad Dog with a turn 2 Mystic Visionary. Not willing to trade cards in combat Swannack, elected to drop down to 18 life and cast a Last Rites, to which Nadebaum repsonded with an Engulfing Flames targeting Swannack's Visionary. 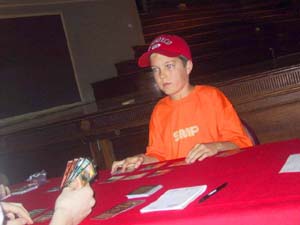 The two then traded damage again but Nadebaum could draw nothing but lands as Swannack cast a Blessed Orator, Aven Archer and a Painbringer. When Nadebaum finally drew into a Halberdier, it was blocked by the Orator, and when he tried to kill it in response, Swannack cast Gallantry taking it well out of burn range. From there it was only a matter of time before Nadebaum succumb to his horrible land clump.

In an identical start to game two Nadebaum started with a second turn Mad Dog which faced off against Swannacks turn two Mystic Visionary. This time when the Dog attack Swannack elected to trade the two in combat, playing a turn 3 Soulcatcher, which looked a little weak compared to Nadebaums turn four Chainflinger. Swannack stalled on three lands for a turn but powered right through casting Cloudchaser Eagle and a Morbid Hunger on Nadebaums Chainfliger and then two turns later on an Aven Fisher. Swannack then played an Aven Flock but that was no match for the mighty card drawing advantage that Nadebaum threatened to generate with his freshly cast Cephalid Broker.

Unable to deal with the broken Broker Swannack struggled to hold off the army that massed infront of him, and to top it off Nadebaum reached threshold within a turn. After reaching threshold Nadebaum let fly with a 5 point Flame Burst on the Aven Flock and dropped a Standstill, forcing Swannack to pop it with a Second Thoughts netting himself some nice card advantage. Nadebaum then finished off Swannack in 2 attack phases with a hefty amount of burn from a flashed back Flamebolt and Flame Burst.

Swannack again decided that he'd draw against the speedy U/R deck of Nadebaum and when Nadebaum was forced to mulligan a one land hand it looked as though the advantage had slid slightly in his favor. For the third straight game Swannack played a turn 2 Mystic Visionary but Nadebaum had the answer, peeking at Swannacks hand first at the end of the turn and then casting a Firebolt. Hoping that it was the only burn spell Nadebaum had Swannack slapped down a Hallowed Healer which came online a turn later. 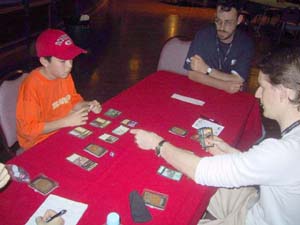 Nadebaum kept the tempo going casting an Aven Fisher, and must have looked happily at the Chainflinger in hand when Swannack laid out a Soulcatcher and a Frightcrawler. However Swannack onece again had the answer casting a Morbid Hunger on the flinger and a turn later casting Last Rites for 1, removing the last card that Nadebaum had from his hand. From there it was a race to see who could draw the best cards and Swannack seemed to be doing just that, when he played out a Cloudchaser Eagle and an Aven Archer.

Nadebaum had to dig deep and was forced to Flame Burst the Archer and a turn later attempted to Firebolt the eagle but Swannack had drawn an Embolden, preventing the kill from occuring. Swannack continued to draw his flying creatures, dropping down an Aven Flock the very next turn. As Nadebaum drew into his early game spells like Mad Dog, Swannack found more fat in Blessed Orator, preventing the flashback burn effects that Nadebaum was amassing in his graveyard. Again unable to draw anything but land Nadebaum was helpless as the Flock, Orator and Cloudchaser Eagle did the final points of damage to him.