The final round. Six wins each. Whoever walks away as the winner, will return tomorrow. The loser does not pass Go and does not collect 200 dollars. Antoine Ruel and Roel van Heeswijk both knew what was at stake.

Roel won the die roll, but both players decided to mulligan their initial hand of cards. Roel kicked off slow with Blood Crypt and Steam Vents, but made Isochron Scepter on turn three—leaving open Steam Vents for Force Spike, possibly. Antoine let the Scepter resolve, the imprint: Orim's Chant.

Unfortunately, Orim's Chant is not Abeyance, and Antoine's Pernicious Deed had a chance to shine, and blow up. Antoine had two mana left and used them to good effect for Tarmogoyf. But no! Mana Tithe peppered the pesky Goofy. Antoine made Fact or...

(Hold on a second! A judge stopped the game, noting that the Tarmogoyf had been played illegally under an Orim's Chant. That resulted in a warning for both players, for Game Rule Violation on Antoine's side, and Failure to Maintain Gamestate on Roel's side.)

...Fiction, which Roel split so that Antoine took Mental Note and Counterspell. With a shrug from Roel, Mental Note got Mana Tithed. The white Force Spike wouldn't have been able to stop either of Antoine's following plays anyway: Tombstalker, Tarmogoyf, attack for 10 damage. Roel was under pressure. He had one temporary out, trying for Orim's Chant in Antoine's upkeep, but the Frenchman had Counterspell and attacked for the win. 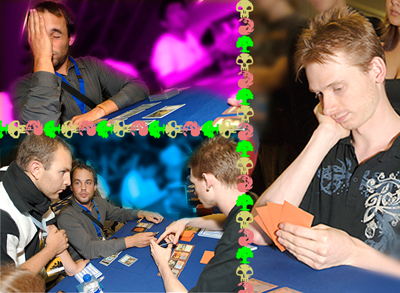 Antoine Ruel and Roel van Heeswijk soldier through a difficult match. Roel, on the play, was content with his initial seven. Antoine, on the other hand, had nothing but contempt for his set and mulliganed. A Duress from Roel revealed that Antoine had kept a hand of Force Spike, Spell Snare, Remand, two Smother and a Forest. Erm... right. When you're one game up, and you're called Antoine Ruel, you keep those kinds of hands. Maybe. But why? His reasoning wasn't clear, and in the confusion of the rest of the match, the issue dropped to the background.

But first, more game. Roel made his second land drop (unlike Antoine) and dropped Sensei's Divining Top. Antoine threw a glance at the clock. Was he already considering a concession to have enough time for Game 3? Third turn: no land. Oh, by the way, that Duress earlier took Spell Snare away, the one card that would have reliably stopped an Isochron Scepter... in the event of blue mana ever arriving.

Roel dropped Dark Confidant to go with his Top, and Antoine finally found a land in Overgrown Tomb. Antoine attempted Smother in Roel's upkeep. That was cancelled by Mana Tithe. Antoine apparently hadn't concentrated on the play, and was seemingly a little flustered that he had thrown away his important removal spell like that. Roel's Dark Confidant started to beat down, another Duress revealed Smother, Force Spike, Tombstalker, Remand, and Pernicious Deed in Antoine's hand.

On the top of his library, Antoine found an Island, giving him three mana for Pernicious Deed. It seemed that Antoine had re-focused on the game, but Roel had Insidious Dreams, discarding Meddling Mage, Blood Crypt, and Isochron Scepter. Roel's Top had previously gone back into his library, so Antoine just blew up Dark Confidant when he finally cracked the Pernicious Deed.

Now the confusion started. On his own upkeep, Roel played Orim's Chant. Antoine scooped his cards in play together, clearly indicating that he knew that Roel had put Erratic Explosion and Draco on top of his library with Insidious Dreams. Antoine, with his cards from the table in hand, said "show me." Roel didn't really want to, fidgeted around, and finally showed Antoine Erratic Explosion and Draco. While Antoine was already mashing his library together, both players realized that the top card of Roel's library had, in fact, been Sensei's Divining Top, and Explosion and Draco were the next cards down. Antoine would still have had one more turn to live. He decided not to call a judge, and let it slide, but clearly was not happy.

An early Duress from Roel showed Tombstalker, Tarmogoyf, Spell Snare, Forest, and two Ghastly Demise, clearing the way for Isochron Scepter with Orim's Chant on it by taking Spell Snare. "I can't play," Antoine berated himself, "I think I played one turn right in Game 2." Now, he had to face and overcome a Scepter with Chant and a Meddling Mage set to Ghastly Demise. Another Duress from Roel disgusted Antoine, who literally dropped his cards on the table. Two Ghastly Demises were stranded in his hand, and another Spell Snare (meanwhile drawn) gone. Roel attacked with Meddling Mage and activated his Isochron Scepter. Antoine claimed that the activation happened in Roel's turn, and when Roel objected, Antoine called a judge.

The judge asked what happened and clarified the situation with each player individually. "If there wasn't that Game 2, I would never have done it," said Antoine while the investigation was under way, meaning calling a judge. The judge in command of the situation ruled that Roel's intent was clear, as he had been using his Scepter with Chant previously in the same way. Antoine clearly didn't like the entire situation, but still appealed to the head judge. Head judge Jaap Brouwer asked Antoine to give a reason why he appealed. Antoine just asked for a second opinion, and Jaap agreed with the ruling and reasoning of the judge who handled the situation.

The game proceeded after the round had already ended, with five minutes extra time added to the match. Roel made another Meddling Mage, naming Counterspell. In Antoine's next upkeep, Antoine tried to Stifle the Scepter activation, but snatched another Orim's Chant in response. Antoine was relegated to using his Cephalid Coliseum to draw. A turn later, he was able to Smother the Meddling Mage set on Ghastly Demise in his own upkeep, and then Demised the other one so that Roel was left without an offense.

Antoine fought through the next Scepter activation with Counterspell, then dropped and activated Pernicious Deed, killing the Scepter and both of Roel's Chrome Moxes. Roel went for Insidious Dreams, which Antoine successfully Force Spiked, and Antoine had Tombstalker to try and turn the tide. Time was called, and three of the five extra turns would go to Antoine. The first extra turn saw Orim's Chant from Roel preventing an attack. The second turn was Roel playing and activating Sensei's Divining Top. In the third turn, it was clear that neither player could win. After much fidgeting and reddening of the face, Roel decided that he would concede.