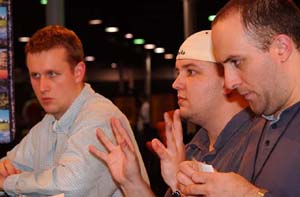 There was some discussion before the round began about whether or not these two teams could draw. If they did, there was a mathematical possibility that one of them would get eliminated, so 2020 decided not to draw.

2020, from Canada, are one of the surprise teams of the tournament. Sure, if you've been paying close attention to Pro Magic you should know who Elijah Pollock, David Rood, and Steve Wolfman are, but they weren't on anyone short list of team expected to make the top 4.

Courtney's Boys, on the other hand, were. Gary Wise has already been at the top of the three-man team food chain, and his current teammates—Bob Maher and Neil Reeves—are playing at the tops of their games.

In Game 1 of the C seats, Maher came out like gangbusters: Patrol Hound, Phantom Nomad, Chainflinger, and Phantom Flock. Pollock tried to stem the bleeding with an Aven Fisher upgraded to a Workfang Drake, then a Lost in Thought on the Chainflinger, but Shelter took care of Lost in Thought, and the nigh-unkillable Phantoms ended the game in about 8 turns.

On the other end of the table, however, Wise was having awful luck. He and Wolfman each had a 2/2 in play when Wolfman cast Last Rites for three, discarding (of all things) Mutilate, Fledgling Dragon, and a land. Wise had only two spells in his hand (Famished Ghoul and Soul Scourge), making it a 2-for-4, but it gave Wolfman all the necessary tempo. A Whispering Shade came down and quickly knocked Wise to five until he td'ed a Waste Away, but Wolfman had the last six points handy in the form of Organ Grinder and Fiery Temper.

Pollock got the good start in game 2 of their series, with Hapless Researcher, Cephalid Looter, Twigwalker and Aven Fisher. But Maher calmly stabilized with a Chainflinger and a Mystic Familiar with Floating Shield (green). The 'Flinger killed the Looter and then the Fisher when Bob blocked it with the Familiar and cast Shelter. When Bob played Phantom Flock and protected it from a thresholded Toxic Stench with a second Shelter, it was all over but the crying for Pollock.

Just to make things interesting, Wolfman was smacking around Wise again. Fledgling Dragon and Mortivore spelled doom in short order for the erstwhile Canadian. Now all eyes were on Reeves and Rood.

The Reeves/Rood match was moving slowly; both of the other matches were over before they finished the fist game.

Reeves started out with two Basking Rootwallas and a Skywing Aven, but Rood was looking to put an end to the beats with a Beloved Chaplain enchanted with Psionic Gift. Reeves shrugged and sent the team. Rood blocked a Rootwalla, of course, and Reeves had a little present for him in the form of Flaring Pain.

Rood was down but not out, and played a Cephalid Looter that Reeves had no way to kill. After several turns of Looting, Rood was close to stabilizing. Reeves attacked with his Rootwallas into a 2/2 Battlewise Aven, but Rood had Mental Note to gain threshold. Rood now had board control at seven life. 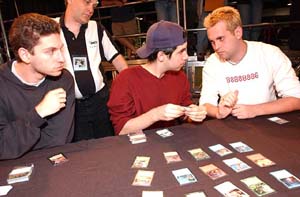 His Looter found him a Vigilant Sentry and a Shieldmage Advocate, and things were getting desperate for Reeves. He tried an attack with his Skywing Aven, under the assumption that once damage was on the stack and Rood activated his Advocate, Reeves could respond by bouncing the Aven so Rood couldn't choose it as a "damage source." After some discussion, Collin Jackson and Nat Fairbanks set the record straight and Rood took no damage (you can choose a damage source that isn't in play.) After that failed attempt, Reeves scooped.

Reeves came out like lightning again in Game 2, getting Rood down to five with a Rootwalla and a Forcemage Advocate before Rood got out a Balshan Collaborator with Unquestioned Authority and was looking to stabilize again.

At this point Elijah Pollock came running over to tell Rood that Slay Pillage Gerard had won their match, meaning 2020 was guaranteed Top 4 with a draw. Rood offered Reeves the ID, and down one to zero in the deciding match, Reeves accepted.

2020 is now guaranteed a pairing against Slay Pillage Gerard, in which they'll ID again and both of them will be in the Top 4. Courtney's Boys will have to play it out in Round 11.