Round 10: Dancing the Two-Step 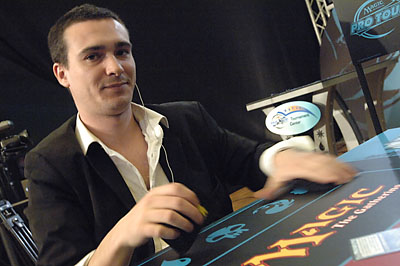 When things look bad, Pierre Canali just undoes another button.en Rubin is back on the Pro Tour with his Hall of Fame year fast approaching, and after a rough journey to Switzerland, he's proving that a little time hasn't taken the edge off his game. The two-time Masters Series winner is still well in contention for a Top 8 following his extended break, and after a sleepy but successful day on Friday, he is hoping for more of the same, only a little more awake. His opponent, Pierre Canali, was charged last night by BDM with the task of winning the Pro Tour. After his breakthrough performance in Columbus, Pierre has been building a name for himself on the tour, not just as "Pedro" the salsa dancing ladies' man, but also as a formidable drafter - good enough that he is in BDM's picks for Top 8.

Pierre won the coin flip and chose to play first, leading with a Swamp. Turn two saw a Shadow Guildmage who was not only a turn late to the party, but who was functionally a vanilla 1/1, as Pierre had only Swamps in play. The first play for Rubin, beyond Mountains and Islands, was a morph. This was enough to hold of Canali for a turn, though, as he deemed his Basal Sliver too valuable to attack in with in the face of some untapped mana from the American.

A Fire Whip from Ben made things a little difficult for Pierre, who suddenly decided that he could afford to run in, as the trade would now be in his favour. He got first blood but lost his one drop at the end of turn. Ben played a Dream Stalker, bouncing an Island, and passed.

Canali simply drew, played a land and said "go." When Ben went for a shot to the face at the end of turn, Pierre responded with Tendrils of Corruption to kill the morph with the whip, only to have it hit by Cancel. Ben played a Keldon Halberdier and passed, seemingly well in control of things, with Pierre stuck on only black mana. The following turn he swung in and suspended Errant Ephemeron.

Pierre simply swung back with his Basal Sliver and played a Rathi Trapper. The life totals were 15 to 12 in Ben's favour, and he had a commanding board presence as well. A swing took Canali to 7, then Conflagrate proved to be a one-sided Wrath of God. 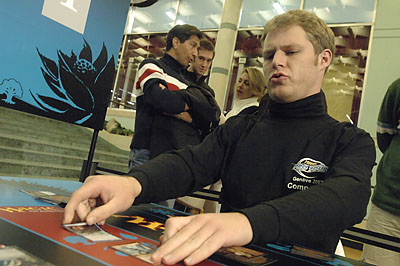 Ben Rubin tries to smooth things over with some kissy-faces.

Canali drew and scooped up his cards, shuffling in the hand full of red spells that he'd been stuck with for the entire game.

Both players led with Mountains for Game 2, but it was Ben who again had the better start, suspending Keldon Halbardier on turns one and three, before following up with Primal Plasma, which was hit by a StingScourger from Canali, who was stuck on two land - this time both Mountains. The Plasma came back the very next turn, again as a 3/3, while Pierre was forced to discard as he still hadn't found another land.

The next turn, when Ben played a Temporal Eddy on one of Pierre's Mountains, the Frenchman simply extended his hand.