Round 10: Darwin Kastle vs. Ben Stark 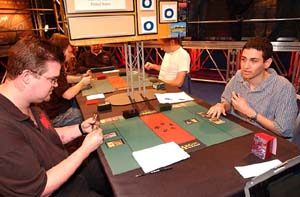 Ben Stark is on a roll. He showed up at the Reliance Arena without an invitation. He took Jens Thoren's Invitational deck, and strolled to a place in the PT. He didn't have a deck, but Peter Szigeti hooked him up with Pattern of Rebirth. Having worked with Szigeti testing the Pattern deck, it was a natural fit. He's run 8-1 to this point. The pressure is starting to show. The possibility of a Top 8 has Stark downright jittery.

Kastle chose his Rock deck because it was very much his style: Slow, card-advantaged based control. With the right disruption to give the field a hard time and lots of good answers, The Rock has been hanging around the top of the standings since the close of Day 1. Kastle steered his version to perfection, dropping only two games thus far. As always seems the case, there was lots of YMG action in the Feature Match area. Kastle sat side-by-side with teammate Rob Dougherty.

Stark kicked off with Brushland and Llanowar Elves. Kastle fired off a Cabal Therapy, and thought for a split-second before naming Nantuko Husk. It hit, leaving Stark with Vampiric Tutor, Academy Rector and some lands. Stark drew nothing to do with three mana and swung in with his Elf. Kastle Edicted and passed it back. Stark thought for a second and drew his card. It was Nantuko Husk.

"I thought about Tutoring for it." - Ben Stark

"I assumed you would." - Darwin Kastle

Kastle played a second Therapy, this time for the Rector. It showed Tutor and Pattern waiting. Stark ripped City of Brass, enabling Pattern of Rebirth on his Husk. Kastle forced the Issue with Naturalize. Stark sacrificed the Husk to itself, and tutored up Symbiotic Wurm. His advantage did little to calm his nerves. He tapped his foot relentlessly, and shifted around in his chair.

Kastle was the model of composure, despite staring down the huge 7/7. He dropped Treetop Village and played a third Therapy. This time Stark played his Tutor.

"In response, I'll Edict you, I guess." - Darwin Kastle

Stark eagerly ripped up his sheet of paper for seven tokens. He searched his library for a Pattern to put on a token. Kastle drew, and scooped.

"I've never thought about how to sideboard this matchup before." - Darwin Kastle

"Oh, we knew about that deck. I mean, I played that deck back at the Masters Series. I think ... I think I invented that deck." - Darwin Kastle

Both players opened with forests and Birds of Paradise. Kastle Edicted, and when Stark played a replacement, Kastle came down with Faceless Butcher. Stark had a third bird. 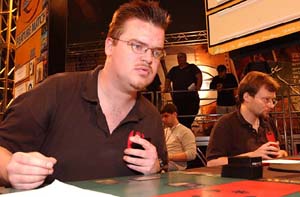 Kastle dropped Cabal Therapy and named Academy Rector. Another hit, leaving behind Tutor, Pattern and Visara the Dreadful. He sacrificed his Birds to Therapy again. This time Stark played his Tutor in response. He fetched Academy Rector. Kastle wanted to hit the Pattern, but for a second seemed to forget what it was called. It looked like Stark might get a gift, but Kastle's memory caught up with him, and he named the card correctly. Chainer's Edict left Stark with just three lands.

Kastle added Yavimaya Elder to the board. Stark's land came just in time, and he played out his Rector. Kastle swung in and let him tutor. Stark went for Confiscate and stole the Elder. Cabal Therapy ended his dreams of busting out Visara. He waited on his Elder, but had five lands and no hand.

Kastle meantime had Living Wish to get Genesis. Stark found Llanowar Elves, enough to take care of the Butcher with the Elder's help. He drew nothing, and the Genesis beatdown continued until he was dead.

Stark had a good start of Birds, Wall of Blossoms, with the mana to Tutor in response to Kastle's Cabal Therapy on his second turn. He chose Rector and missed, seeing Pattern of Rebirth, Tutor and two Brushlands. Things weren't looking good for Kastle. 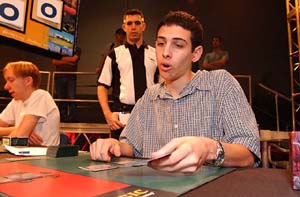 Luckily, he had Llanowar Elf ready to bust up the combo. He flashed back the Therapy and snagged the other Tutor. Stark had set himself up Phyrexian Ghoul. But Kastle had anticipated this. He had a second Therapy to shanghai his combo.

Kastle busted out Deed now things were almost completely within his control. Stark had one more chance to rip. He drew Birds of paradise. Kastle untapped, Therapied for Husk and saw only Birds of Paradise and Gilded Drake, then Deeded away Stark's team.

While Stark drew no action, Kastle started pounding with Treetop Village and Yavimaya Elder. Stark tried Vampiric Tutor, but didn't think there was an answer in his deck. He went for Saproling Burst. Kastle threw down Naturalize, leaving the Feature Match undefeated.