Round 10: Darwin Kastle vs. Raphael Levy 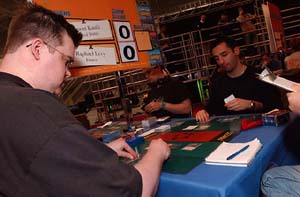 Both players face a very slim chance for Day 3 at 5-3-1 but for the most part these two PT circuit mainstays are playing for pride, PT Points and a reasonable shot at some cash to offset exorbitant travel costs. A loss should knock the loser out of range of a 4-digit money finish. Darwin Kastle is playing a B/W cleric deck with a few zombies and soldiers thrown in for good measure. The highlights of his deck are three Vile Deacons. Raphael Levy's deck is all about the Lightning Rift. His deck cannot possibly lose if he gets an early Rift but he has trouble without it.

Kastle came out of the gate with a turn two Glory Seeker, which was the target of a cycled Tethers on his next turn. Levy's Mistform Dreamer was Swatted EOT and the Glory Seeker was able to draw first blood. Vile Deacon hit the board and Levy came back with Keeneye Aven. Kastle missed a land drop for daunting Defender but Deacon didn't need any other clerics to swing by for three. Kastle played an Essence Sliver and Levy came back with a mystery guy.

Kastle drew the land he wanted last turn and played the Daunting Defender. I was critical of Kastle in round one feature coverage for being too timid regarding his clerics with 'Double D' in play and he threw me a look as he sent his Deacon into the red zone along with the Sliver. A morph and Keeneye ganged up on the sliver and Kastle killed the flier, going to 23 while levy fell to 11.

Levy was clearly disappointed with his deck when he had to make the anti-classic play of "Avarax...go." Kastle was undeterred; he played a Daru Healer face-up and sent his deacon in to drop Levy to 6. Levy was searching for answers and cycled twice during his main phase but had nothing. 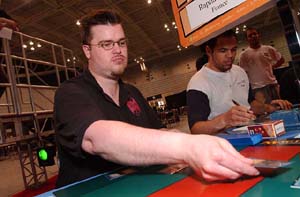 Kastle played a morph but Levy flipped up a Voidmage Apprentice to counter the Wingbeat Warrior from sneaking into play. The Deacon and the Defender swung in and the Apprentice took one for the team and Levy was cling by his fingernails at 3 life. He played a morph and a Flamewave Invoker and sullenly passed back the turn.

The Deacon ate the Flamewave—even if Levy threw everyone in the way he could not kill it thanks to Daunting Defender—and when Kastle passed the turn back after playing a Corpse Harvester he cycled yet again. He played some more chumps and finally killed the Deacon when he unmoprhed a skittish Valesk but when Kastle sac'd the dying Deacon to find a Smokespew Invoker and the 8th land to activate it, Levy scooped.

Levy cycled during Kastle's first two end steps and answered the YMGer's Glory Seeker with a Flamewave Invoker. Kastle stalled on two lands and played a Headhunter after getting in for two with the soldier. Levy got the two points back and had no fourth turn play instead opting to cycle Tethers to keep the Headhunter at bay. Kastle made another morph and had to read the Warped Researcher that Levy played the next turn.

Kastle only missed the one land drop and played Essence sliver and Daunting Defender only one turn behind schedule, which prompted another "Avarax...go" from Levy. Levy looked like he was going to seize control of the game when he played a Riptide Replicator that would make 3/3 black slivers. Kastle was stumped and carefully weighed his options—so carefully that Levy called over a judge to watch for slow play.

With the judge looming, Kastle was forced to action and Swatted the Flamewave Invoker that was a turn away form coming online. He unmorphed a Wingbeat Warrior and swung in with everyone and the Researcher ate the Sliver. Kastle = 21 Levy =11.

Levy started making a token every turn as well as playing out fliers as he drew them. Kastle was hesitant to attack back with his Wingbeat out of fear of the Warped Researcher jumping up and munching it. Kastle started to mount his cleric army—two Deacons, Daunting Defender and a Daru Healer but that plan was foiled when Pinpoint Avalanche took out the Daunting Defender in response to the Deacons' abilities going on the stack. The two clerics attacked as 5/5s instead of 6/6s with 'Double D' riding shotgun and they merely traded with tokens. "That went poorly," offered Kastle.

Late in the game Levy finally drew his Lightning Rift and it was enough to finish of Kastle with a flying Warped Researcher and two 2/3 fliers.

It should be noted that although it probably didn't matter, Kastle neglected to use his Daru Healer to prevent one a turn to himself from Levy's fliers for at least three turns. 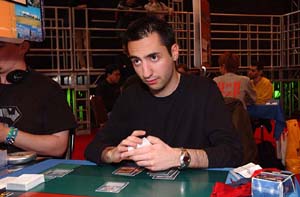 Once again the Frenchman asked a judge to watch Kastle for stalling as the YMGer dallied with the idea of bringing in an Astral Slide and 5 or 6 cyclers. Kastle decided to keep his deck as was and the rubber game was on.

During Kastle's first two EOTs, Levy cycled three times and could only laugh and roll his eyes when his third turn came and went with no play while Kastle prepared to bash with a...well...Spined Basher. When Levy fell to 17, Kastle played another morph. Levy's first non-cycling play was a Keeneye Aven. Darwin sent in the Basher and Levy did not block. A Smokespew Invoker put on a YMG shirt and Levy made his second Keeneye.

Kastle sent in the 3/1's and when they were both blocked by Avens, he flipped up a Wingbeat to save the Smokespew. Levy was on the ropes and made a Covert Operative. Kastle kept the pressure up with Glory Seeker and a morph while Levy kept cycling to find anything. His only play was a Flamewave Invoker—he did have 8 land in play though. When Kastle Swatted it and swung in for the kill, Levy threw three more lands on the table in disgust and offered the hand.