Round 10: Dirk Baberowski vs. Andrea Santin 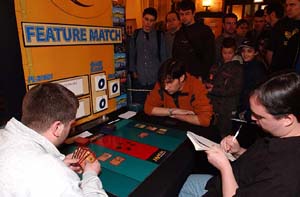 Shhhhh...Don't tell anybody, but Dirk Baberowski has won three Pro Tours. He rolls his eyes when you point this out to him, "Sure, if you count the team events..." An accomplishment he is even more proud of is his consistent strong finishes at virtually every Pro Tour since Phoenix Foundation's first team title. He has finished 24th or better at every Pro Tour he has attended except for Osaka, "We won Masters I that one so I wasn't to concerned with that one."

Andrea Santin teamed up with a deck registration error to eliminate another multiple Pro Tour winner, Jon Finkel, from Day 2 contention in the last round yesterday. He was not exactly confident about his chances going into that round though—after he won he had to get a refund for the PTQ he had signed up for just in case.

Dirk may have won multiple Pro Tours but he hasn't had much luck this weekend with the die rolls. "I am 1 and 7 this weekend rolling the die." As he looked down at his 3 he added, "1 and 8! This is not the Pro Tour you want to be losing die rolls."

"At what PT do you WANT to lose die rolls?" asked Andrea.

Just as teammate Dirk was saying exactly the same thing Kai's smiling face suddenly popped out from behind the partition and chimed in, "Limited?"

"Even in morph Limited?" asked a skeptical Andrea.

Even though Andrea led off the goblin deck made the first play with Goblin Sledder and followed it up with Goblin Piledriver. "It's nice that I don't have a thinking man's deck," said Dirk while Andrea deliberated his third turn play. He ultimately played a Lightning Rift, making you wonder what all the thought was about. Dirk took his opponent down to 15 and added a Skirk Drill Sergeant to his army.

Lightning Rift and Gempalm Incinerator is ridiculous card advantage against the goblin decks and Andrea went three-for-one, killing the Sledder and Sergeant while drawing a card. "Nice one, not a bad turn for you..."

Andrea agreed, "Yeah, it's the first time I used it all weekend.

"I had such an impressive army...one minute ago!" It was all good for Dirk though and he played a Goblin Goon. "Did I shuffle your deck? Grrrrrrr! How many cards do you have left?"

"Three and they are all good!"

"No one believes me when I tell them my cards are good."

Andrea could only shrug and kill the Piledriver with a cycled Tusker. He passed the turn back without incident and when Dirk tapped four mana on his next turn, Andrea threw his hands up in disgust: "Another Goon?!?"

"I told you they were good."

Andrea tried to hold Dirk off with a Tephraderm but he was at 8 with two Goons and two Goblin Burrows in play. Dirk chose to play a Clickslither and attacked with everyone for the win, "I could have won with Goon and Burrows but I wanted to demonstrate the quality of the cards that were in my hand."

Dirk had a twelve-card sideboard for the match taking out Gempalms, a couple of Sparksmiths, and various other goblins to put in Tephraderms, Avaraxes, Threaten, Rorix, AND two Forgotten Caves. "I don't understand how people have this same sideboard but don't have any extra lands so they can cast this stuff. We're the only ones with land in our board," Dirk explained after the match. 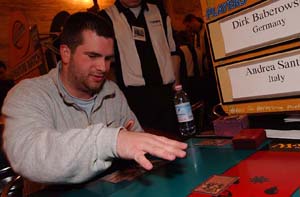 "Stupid Goon-sssss," Andrea made the 's' into its own syllable to express his disgust at having to fight though multiple 6/6 goblins. "I'm not happy about it but at least it was the fastest game I have played all tournament."

"If I had drawn I would have lost a turn earlier!" shrieked the incredulous Andrea.

"But I drew into the Goons," teased Dirk. "I would not have drawn them so quickly."

The game opened up in similar fashion with a Grappler and Piledriver from Dirk and a Lightning Rift from Andrea. There was no Gempalm Ancestral from the hometown hero this time and he had to content himself with killing stuff with Forgotten Cave and Krosan Tusker with a Contested Cliffs at the ready should he ever play a beast.

A big beast would be required since turn four could only mean one thing for Dirk, "Have you ever played a game where you didn't go turn two Piledriver...turn four Goon?!"

Goon lumbered past a Ravenous Baloth and Andrea fell to 10 (really 14 but who's counting?) and Dirk added a Piledriver to his side of the table. Baloth attacked for four and Starstorm for 2 took care of Piley. Dirk slumped when Andrea played the enemy of all Goons everwhere—Broodhatch Nantuko. He cycled two Forgotten Caves to find an answer and only found a Grappler.

Dirk fell to 12 on the next turn and then Threatened Andrea's Baloth who of course sac'd it in response. He missed an opportunity to kill the annoying goblin with his Cliffs in response and was very angry with himself when he had to cycle a Gempalm to kill it—he also missed a chance to do 2 more to Dirk with Lightning Rift.

Andrea ripped another Baloth off the top and was able to dispatch Dirk in a couple of turns while the Goon could only watch.

When a countryman came over to offer Andrea congratulations on evening up the match, the Italian could only express disgust with himself, "For what? I had exactly one decision to make the whole game and I made the wrong one. My deck won that for me, I had nothing to do with it."

"You finally get to play," teased Andrea. Dirk celebrated the occaision by siding two of his Piledrivers back in. "How many Goons do you play...8? Is that the German tech?" 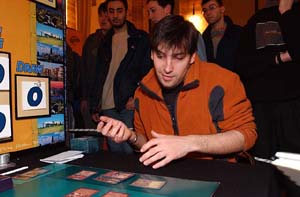 Dirk opened with Mountain but no first turn play but did have the turn two 'Driver. There was no Rift for Andrea this time and he just played lands for the early game. He could only shake his head when turn four brought another Goon—he was out of exclamations. He fell to 12 and finally found some breathing room with a Tephraderm—or so he thought. A timely Threaten took him down to one and he managed to summon up a few more politically incorrect exclamations.

"C'mon Baloth!" Andrea rapped on his deck looking for the only card that would keep him in the game. He was surprised as anyone when his deck obliged. Dirk had another Threaten and Andrea sacrificed it to go up to 5 and the Goon traded with the Tehraderm but he took 1 from a Goblin Sledder that slipped through the cracks.

Andrea thought for a very long time on his next turn. "Mmmmmm! A moment to think? This is so difficult..." Then perhaps remembering his opponent's accomplishments added, "To my small brain, anyway." Ultimately he settled on killing the sledder with an Incinerator and passed the turn.

Dirk kept the pressure on high and played an Avarax and searched for another one. "No breaks for me...no breaks..." sighed the Italian as he fell back down to 1. Andrea cycled furiously to find something and Tusker and Gempalm eventually yielded Tephraderm, which would be a problem for Dirk since Andrea still had Cliffs mana available.

"You have a million cards right? I can't play Avarax or you'll kill them both so...." The lone Avarax attacked and the Italian had to block. Dirk pumped the Avarix and let it resolve and pumped again. Andrea asked to be sure, "You let it resolve?"

"I'm not great at Constructed but I know how to pump a creature," remarked Dirk and the monsters traded. Andrea played a Silklash Spider. Although not available for cliff duty, the spider negated the Rorix that Dirk was preparing to send over for the win next turn. Dirk played Avarix and failed to search—the other was in his hand—and passed the turn back to Andrea who played a Krosan Tusker that would be double Cliffs enabled next turn. That would never come to pass as Dirk drew the third Threaten and took the Spider and played another Avarix and attacked for the win.

"Aaaaarghh!" Never one to miss an opportunity to wave his hands in the air dramatically, Andrea railed against the fates for losing the match. "I'm not supposed to lose to Goblins!"

I'm not saying you don't own the match-up. I'm just saying no one is supposed to lose to Goblins," laughed Dirk.