Round 10: Dirk Baberowski vs. Patrick Mello

At the end of day one two decks were left with perfect records at the top of the standings. Both of them were the same red deck. Experienced German pros Patrick Mello and Dirk Baberowski had confessed to not testing much and turned up with sligh decks based around lots of goblins and the Piledriver. With a lot of the French opting for Suicide Black and Reanimator not putting in much of an appearance it turned out to be a good metagame choice. 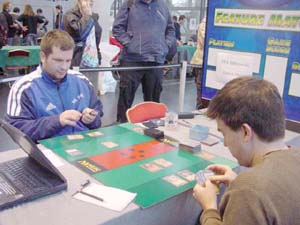 "Ah, first blood," Baberowski announced running in his Raging Goblin. He followed it with a Piledriver.

Mello, going first had dropped Seal of Fire and Mogg Flunkies. On his third turn he summoned more Flunkies and a Goblin Lackey to dissuade Baberowski from attacking.

Missing a land drop Baberowski summoned a Jackal Pup and passed the turn. The next turn Mello Sealed the Piledriver off the board and started swinging. A Lava Dart took down the Lackey but the pair of Flunkies, while not so good on their own, were causing a major headache for Baberowski.

The next attack they were joined by a Fanatic and Baberowski chose to throw everything in the way of one Flunky. Once the dust settled from the scrap in the red zone Mello was left with just one Flunky and a Seal of Fire.

Baberowski summoned Jackal Pup and Piledriver. Mello needed to summon a creature to go with his Flunkies. All he could do was drop a Barbarian Ring and pass the turn.

The next turn seemed to turn it for Baberowski. A Flunkies came into play on his side and was sent straight into the red zone with a Reckless Charge. Mello Sealed the pup but still lost half his life total to the two goblins. He needed to draw something, didn't and showed his hand was two mountains and a Barbarian Ring at the end of the game. 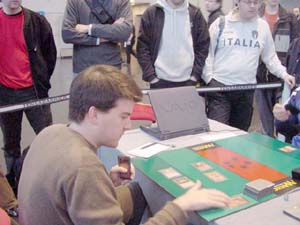 Mello made Baberowski go first and soon Raging Goblins were zooming past each other into the red zone. Unfortunately both of Baberowski's lands were painful Barbarian Rings as he followed his Goblin with some Flunkies. Mello had to lay a Ring of his own but a Dart on Baberowski's Raging Goblin kept the Flunkies cowering at home.

More goblins appeared and they stood and pulled faces at each other on either side of the red zone. Mello had more and they charged into the red zone. Another brawl and one Raging Goblin was left standing from the carnage. A Piledriver came out to give it company only for a hail of removal to send both to the graveyard.

Baberowski dropped a Cursed Scroll, but as only one of lands wasn't a Barbarian Ring activating it would cause more pain to him.

Mello looked threatening as another pair of Flunkies appeared. Cursed Scroll plus flashed back Dart took down one to keep the other at bay. Baberowski had taken too much damage off his land and Mello revealed enough damage in his hand to tie the match at one a-piece.

Game 3 Baberowski got to the Scroll first again but he was stuck at two land, a situation worsened by a Rishadan Port on Mello's side to keep him off red mana altogether.

Mello kept the screw up with his port but Baberowski seemed to have a never-ending stream of Lava Darts to annihilate Mello's little Goblins. 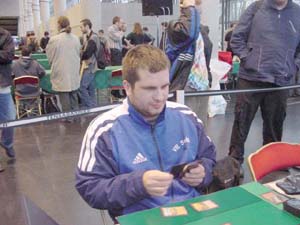 Finally Baberowski found a third land to bring his port into control. He chose to summon a cadet instead, looking to empty his hand and bring the Scroll into play.

Two Piledrivers on Baberowski's side of the board put Mello thinking. With his opponent on 10 life and him with 8 damage on the table he made a Cursed Scroll, but didn't have enough mana to activate the Ring and take the match. Rather than risk falling to a hail of burn from Baberowski's hand he played it safe and Scrolled one of the Piledrivers so he'd only take 1 damage. Baberowski only had a Lackey and so Mello was able to untap and take the match.