"So are you going to win this one?" Paul Cheon asked, hurriedly catching up on shuffling his deck as he sat down to face off against one of the world's best Magic players. He was talking not just about this match, but about the whole event.

"If I win this one, I'll probably go to Hollywood," Jon Finkel replied. 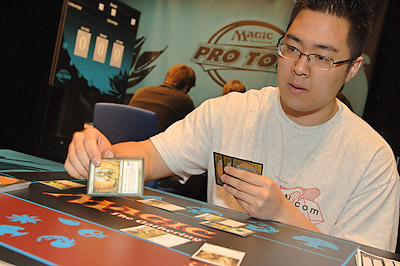 Former U.S. National Champion Paul Cheon After winning the roll Paul quickly elected to keep his hand and when Jon followed suit, they got under way. The players quickly revealed very different tribes as Paul played a Leaf Gilder with his Plains and Forest representing green-white, and Jon dropped Stonybrook Banneret indicating he was a blue-white Merfolk deck. His third land drop, however, muddled that impression, as he played a Swamp to join his Plains and Island.

After the initial few turns the totals stood 20-15 in favor of Paul Cheon, who had a Kinsbaile Skirmisher, Springjack Knight, and Leaf Gilder in play. Finkel, on the other hand, had a Stonybrook Banneret, and Changeling Sentinel. He sent his vigilance 3/2 into the red zone, but Cheon's Kinsbaile Skirmisher was more than willing to block. Finkel had a trump after damage on the stack in the form of Wings of Velis Vel, but Cheon had a counter: Fistful of Force, winning the clash. With damage already on, neither creature died. Post-combat Jon evoked a Shriekmaw to deal with Paul's Leaf Gilder and passed the turn.

The players continued a back and forth pace with Cheon's Kithkin deck on the offensive. With the totals at 17-9 in his favor, Jon managed a resounding effort to stifle Cheon's offensive by playing Cloudgoat Ranger. If Paul was worried about the outcome of the game he didn't let it show on his face, simply playing a Hillcomber Giant and passing the turn.

It would not be a turn that went well for him. Jon followed up his Cloudgoat Ranger with an evoked Meadowboon; all of a sudden the innocuous 1/1 Kithkin Soldiers that had promised to simply get in Paul's way were now threatening to trade with every threat in the former National Champion's deck, while the rest of Jon's team took care of Cheon's life total and Finkel's board position had become dominating: three 2/2 Kithkin tokens, a 2/2 Stonybrook Banneret, a 4/3 Changeling Sentinel, and a 2/3 Stonybrook Angler. Paul had no choice but to pass with a board of Kinsbaile Skirmisher, Kithkin Healer, and Springjack Knight.

He wasn't going down without a fight, however. When Jon attacked with the Changeling Sentinel and two Kithkin Soldier tokens, Cheon played a surprise Briarhorn, pumping the Kinsbaile Skirmisher, and ate the 4/3 and one of the 2/2s for free. Jon, who had played a pre-combat Sage of Fables, demonstrated why he was one of the all time greats. Generally players hold spells until after they attack so that they can represent tricks for combat. This was particularly relevant as Jon had used his only Island to play the Sage, and gave potential information to his opponent (namely "I can't tap your stuff with Stonybrook Angler"). Of course, when Cheon used his 5/5 Skirmisher to kill Jon's Changeling Sentinel, Finkel was able to activate his Sage of Fables and remove a +1/+1 counter from his 3/2 to draw a card.

A Nath's Elite from Cheon with a winning clash leaving him a Kithkin Zephyrnaut waiting on top of his library seemed to turn the game back around into the Level 8's favor. At the end of the turn his board stood with Kinsbaile Skirmisher, Briarhorn, Kithkin Healer, and the Elite. His opponent still had Sage of Fables and two 2/2 Kithkin tokens, but had doubled his Stonybrook Angler count, both of which were 2/3s, to two. The life totals were a precarious 15-6 in favor of Cheon, and Finkel had to have a trick for his opponent's turn or he was dead on board.

And a trick he had in the form of Makeshift Mannequin targeting the Shriekmaw that was in his graveyard. That nailed the Nath's Elite and left Jon free to block in a manner that would decimate his opponent's board. Paul had a trick of his own reinforcing an Earthbrawn to save his Kinsbaile Skirmisher, but he lost the rest of his team and could only make his Kithkin Zephyrnaut after combat. Jon activated his Sage to remove the +1/+1 counters from his Kithkin tokens, needing to find a flier to block the Zephyrnaut. He didn't find one per se, but he did manage a Diviner's Wand followed by an Ink Dissolver. The Dissolver automatically equipped and got a +1/+1 counter from Sage of Fables meaning Jon could give it flying by drawing a card on his opponent's turn by paying

, the amount of mana he had left, to remove the Dissolver's Sage of Fables counter.

Paul didn't have much time to get a win before Jon's overwhelming amount of card advantage would snatch it from the Colorado resident. He drew a Knight of Meadowgrain, but when Jon was able to stay stabilized by playing a stream of blockers through his extra 2-3 cards from the Wand each turn, Paul had no choice but to pack it in.

After a marathon first game which saw both of the other matches in the feature match area finish in the same amount of time Jon and Paul rushed through shuffling and sideboarding. "I'll try to play a little faster, a draw is not our friend," said Jon.

Cheon came out of the gates with a Wizened Cenn into Kinsbaile Skirmisher, but Finkel wasn't far behind with Stonybrook Banneret and a Paperfin Rascal, though he lost the clash. A Kinsbaile Balloonist from Cheon made things look very bad for New Yorker Finkel. His team was filled with ground troops, but he did manage to use Wings of Velis Vel to jump a Stonybrook Banneret that killed Wizened Cenn, given flying by the Balloonist. A Paperfin Rascal traded with Kinsbaile Skirmisher, and the totals stood 20-11 in Cheon's favor.

A huge attack from Paul with a Balloonist, Leaf Gilder, and Kithkin Greatheart after a pre-combat Giant in the form of Hillcomber Giant left Finkel at just 4 when he declared no blocks. He peeked at his next card during his draw phase and the two players moved to the final game of the match.

Apparently unsatisfied with his prospects on the draw, Cheon asked a judge for two lands. Finkel requested a check on how much time was left in the match, something he had done frequently throughout the first two games, then presented his deck to his opponent.

The Hall of Famer, on the play, opened on a mulligan and didn't seem very happy about it. Though in good position in the tournament, one could be certain he wanted a win this round to lessen his workload later in the day. Things looked up a bit for him, however, as Paul followed suit sending his hand back for a new set of six.

The game got under way and both players managed two-drops; Paul's in the form of a Leaf Gilder while Jon made a Shapesharer and hit each of his three colors of mana in a Swamp, a Plains, and an Island. Paul, on the other hand, was stuck on just Forests, though he did manage to continue playing spells adding a Lys Alana Bowmaster to his board. Jon's Turtleshell Changeling promised to make it next to impossible for either creature to get through however, and a follow up Fathom Trawl netted Jon Cloudgoat Ranger, Makeshift Mannequin, and Stonybrook Banneret. Things were not looking good for Paul Cheon. 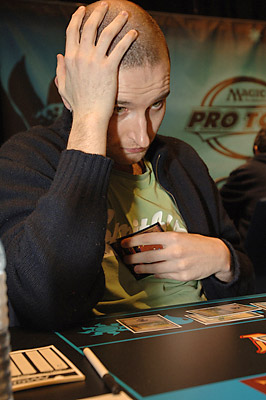 Hall of Famer Jon Finkel After a few turns of expedient play and with seven minutes on the clock, the totals stood 19-14 in Paul's favor, with his board consisting of Veteran's Armaments, Kithkin Zephyrnaut, Lys Alana Huntmaster, Kithkin Healer, Lys Alana Bowmaster, and Leaf Gilder. Finkel's board had Cloudgoat Ranger and three subsequent Kithkin tokens, Turtleshell Changeling, Shapesharer, Stonybrook Banneret, and Stonybrook Angler, with a Makeshift Mannequin in hand ready to reload on Cloudgoat Ranger should it wind up in the graveyard.

An evoked Meadowboon, however, changed that potential outcome. With a horde of pumped creatures Finkel was a turn away from playing Mannequin targeting the Meadowboon, then using his own Stonybrook Angler to blow it up and making his forces even larger. Cheon certainly seemed aware of that possibility and sought an attack which might force his opponent to trade some creatures. He couldn't do it, however, when Finkel tapped Kithkin Zephyrnaut with the Angler. Paul made a Game-Trail Changeling and passed the turn.

On Finkel's turn his Mannequin options got even better as an evoked Shriekmaw took out Game-Trail Changeling. But Finkel wasn't done! With the Elemental's leaves-play trigger on the stack he played Graceful Reprieve, returning the Shriekmaw and blowing up Cheon's Lys Alana Huntmaster before attacking with his 4/4 Cloudgoat Ranger and 2/5 Turtleshell Changeling. Paul Cheon had all but one foot in the grave, holding on at 14 life to his opponent's 6 but way behind on the board.

Finkel evoked a second Meadowboon and off in the distance a very obese woman began warming up her vocal chords. Jon thought for a second then turned all of his creatures sideways against his opponent's two Forests and three blockers. As time was called in the background Paul did the math and quickly extended the hand, giving Jon Finkel the dubya.