Round 10 Draft: Watch Out for Timberwatch vs. Bottom Set 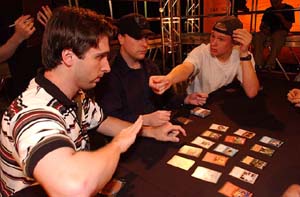 This is the second year in a row that the Guevins, the unpredictable Tom and comparatively predictable Peter, have been within striking range of the Top 4. This time around they haven't got Danny Mandel with them, instead opting for Paul Rietzl, who recently ground in to U.S. Nationals. All their hard work and preparation is going to be put to the test this round when they face Bottom Set, the powerhouse trio of Dave Williams, Neil Reeves and Bob Maher.

Maher's team won the flip, and chose to kick off.

Not much to say here. Reeves signals blue-white and Peter matches.

Williams keeps the ludicrous Savior from crossing to the other side, while Maher signs on with his obvious green seat, and Rietzl heads red-black.

You'd better believe there was a lot of gesturing when this pack was opened. The Brigadier seemed obvious, but it's not as spectacular in the blue-white mirror, since it affects both players. Timberwatch seized on this fact and started pointing at Shieldmage Elder, a meaty bomb if unremoved. Peter remained unconvinced, but accepted his teammates wishes. His eyes bugged out of his head when Reeves passed it on to Williams and switched his black for white. It was a massive blow to Timberwatch, and Bottom Set immediately started smiling.

Pretty straightforward, except Maher realized too late that Reeves would benefit more from Misery Charm than Mage's Guile.

Afterwards, Maher would express surprise that Reeves shunned the second Shepherd in favor of Erratic Explosion. Reeves didn't think the card would do enough.

Lots of green cards, both for Tom and Maher.

With nothing much in the pack for his aggressive red-black, Rietzl cuts. Peter is more than happy to scoop up the Crab, but goodies still make it to the other side. Guevin didn't like either of his options between Stonewood and Clearcutter, but eventually made the choice.

If the last decision was hard, this one was agony. With no way to stop the good cards from getting to the other team, Tom Guevin goes for consistency and enhances his two-slot. Crested Craghorn and Whipgrass Entangler still make it to his teammates.

As soon as this pack was cracked, Neil Reeves started gesticulating at his opponents' team name. Reeves's Toxin Sliver went well with his many Mistforms and possibly his Imagecrafters. Vile Deacon on the swingback was no slouch either.

The players thought this was an error pack, but both Smokespews were stamped correctly. Williams had no problem taking Celestial Gatekeeper, and Peter seemed surprised that Tom didn't hate the Gatekeeper.

Reeves didn't even blink at Dragon Scales, immediately taking The Cuts. Rietzl was thrilled to have Consumptive Goo, but Maher dismissed it a card he doesn't rate at all.

Again, Williams with the strong wheel. Williams would later comment that it seemed his deck was overpowered for his matchup while the other two suffered, but that he didn't know what they could have done differently

Yes, that is Tom Guevin picking Misguided Rage over Krosan Drover. While building he flashed his Lay Waste and Rages and said "If he has no lands, he can't win! This is exactly the sort of thing Bob Maher would do! I'm going to out - Bob Maher Bob Maher!" When his decision was questioned, he responded "You gotta be like Phil Helmuth and envision yourself winning. This is how I envision myself winning!"

Here again, Rietzl shows how much he loves the Goo.

Maher hated the Mage with a smile, for Guevin, who flailed his arms. 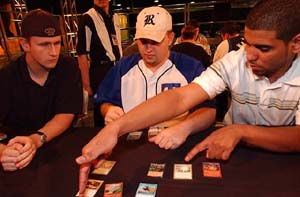 As they built their decks, Bottom Set were reluctant to give themselves an advantage. Williams looked like a sure winner, but Maher and Reeves weren't sure how their matches would go. Maher feared the speed of Tom's deck, and almost wound up playing One With Nature and Treetop Scout, saying "If I get lands, I'm gonna win."

Strangely, that lined up well with Tom Guevin's seemingly-mad insistence on playing land destruction. Rietzl was worried about his match against Williams, but thought it was by no means unwinnable. Peter Guevin thought he had a good shot against Reeves, whose deck he thought would lack cohesion. They were on the whole unnerved by the mishap with the Brigadier, but rallied as best they could.

Maher's team cherished the memory of the Brigadier, however they still insisted that the draft had gone poorly after that major advantage. They just couldn't pinpoint where.