rounds of action had churned two of the game's very best players to the top of the standings. Both players were Pro Tour champions. Osyp Lebedowicz won Pro Tour-Venice a couple years back while Antoine Ruel won Pro Tour-Los Angeles a couple of months back.

Antoine has been near the top or on top of the Player of the Year standings for something like four consecutive years. As the two players sat down and the judges placed their names on the table, Antoine was taken aback by the "Mr." in front of Osyp's name. 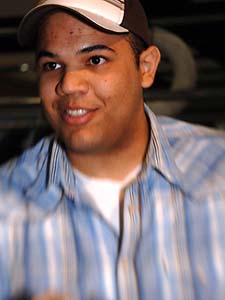 They call him Mr. Lebedowicz

"What is that?" he asked as if to suggest that he too deserved similar respect.

Osyp grinned, "Sorry man. Finish 8-0 and you get the little perks."

Osyp was the only player to emerge from Day One unscathed but parity had settled in and there were seven players with 8-1 records. The two seasoned pros compared notes as to what their potential opponents in the coming rounds might be wielding.

"Zoo?" grimaced Osyp at the thought of playing with dogs and apes. "I guess there is no accounting for taste."

Osyp was playing an Izzetron deck designed by Mike Flores while Antoine was playing Owling Mine.

Both players dropped lands and waited for the other to do something. Osyp passed on turn four without a land drop and tried Remanding Kami of the Crescent Moon in the hopes of finding a land. Ruel Remanded back and the spirit stuck.

Even with the help of the Kami and Compulsive Research, Osyp could not find land four. Antoine kicked him while he was down with Ebony Owl and Exhaustion. To rub further salt in the wound, the Kami got his beat on. A second Exhaustion sent Osyp to his sideboard.

Osyp brought in Annex and Giant Solifuge while pitching anti-creature cards like Pyroclasm and Electrolyze. Antoine brought in Twincast but I could not get a good glimpse of what other cards he may or may not have sided since both players used the stealthy sideboarding method of shuffling all 15 cards into their 60-card maindeck and taking 15 back out. By using this method you do not give your opponent any information about how many cards you are or are not siding in. It has the downside of being rather confusing for the coverage team, though. 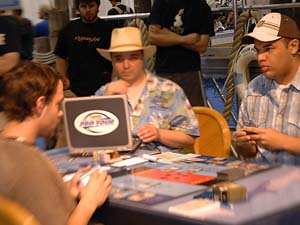 Somebody get BDM a fruity drink!

Osyp drew a big laugh from the swelling crowd along the rail as he tried to figure out how to attack Ruel's deck. "Man, if you win this Pro Tour you are going to make a lot of 12-year olds who play MODO very happy."

Osyp's openers featured two lands and a signet but he stalled there. At the end of Antoine's turn his Telling Time was Remanded but it resolved into an Urza piece during Osyp's main phase. A second Telling Time at the end of Ruel's turn further smoothed his draw with another land and an Annex for one of Antoine's. Ruel hit for six with Sudden Impact in the middle of those plays.

Exhaustion slowed Osyp's momentum for a turn and Kami of Crescent Moon hit the table. On Osyp's turn, Scott Johns reminded him that he had not fulfilled his obligation to the Kamigawa legend.

Antoine glared at Scott, "It is a may effect. Thanks a lot."

Antoine could not keep a straight face as Scott looked over to check the wording on the card.

"Wow, if that card says 'may' your deck stinks," laughed Joe Black who completed the 'Tron. He had enough mana to Repeal the spirit and summon the Tide Star.

Osyp dug for cards with Compulsive Research on the next turn. Antoine took that opportunity to try to Boomerang the dragon. Osyp Mana Leaked the bounce spell and Antoine shrugged. He attempted to Twincast the Compulsive Research that was still on the stack. Osyp Remanded it. He then floated red and two colorless and used the mana to play a Signet and Annex an Island. The Dragon got in for five.

Antoine attacked back for one with the Kami and Osyp dropped to 11.

Osyp dug for three more cards with another Compulsive Research and dropped a pair of Giant Solifuges, both of which resolved. He still had three mana up, including a Minamo to untap his Dragon if anything tappy should happen.

Antoine took a deep breath and ran through scenarios in his head.

Ultimately he used an unreplicated Gigadrowse to tap Osyp's Minamo. Antoine grimaced and tapped out the rest of his lands.

"If you have counterspell you win," he told Osyp.

Osyp did not have it and just stared in disbelief at the TwincastCerebral Vortex that dealt some obscene amount of damage to him. Had Osyp not cast the Compulsive Research, the two cards would have only dealt 10.

He could have also let the Twincast resolve when it targeted his Compulsive Research as putting the Twincast back in his opponent's hand represented lethal damage if Ruel had anything like the Vortex or one of the red Storm Seekers.