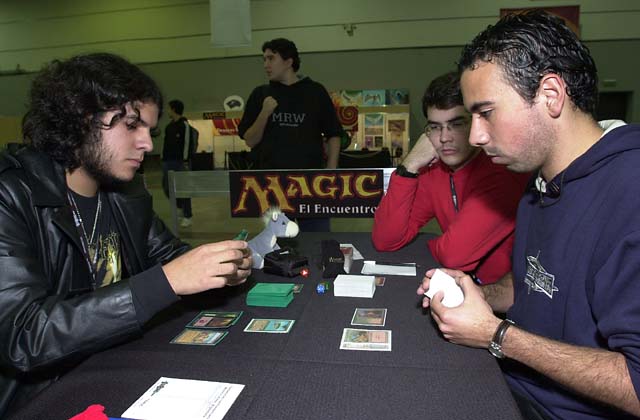 Eduardo played first, and summoned a first-turn Birds of Paradise. Lucas had his own first-turn play in Duress, which caused Eduardo to lose a Fires of Yavimaya. Eduardo then played a Port, and tapped down Lucas' Swamp on upkeep. His hand was very light on threats, and for a while play consisted of both players playing lands and ending their turns, with Eduardo's Port being used on each of Lucas' upkeeps. An Elf was summoned, and attacked into the Red Zone. Lucas cast Duress, and had the choice of forcing Eduardo to discard Ghitu Fire or Urza's Rage. He chose Ghitu Fire.

Thornscape Battlemage now headed into the Red Zone, and Lucas chose not to block. He swung back with his Battlemage, and killed Eduardo's with a Terminate. Lucas then played a Chimeric Idol to increase his damage clock. He cast Duress on the following turn, and Eduardo responded by playing Ghitu Fire as an instant to deal damage to Lucas. Eduardo was left with only a land in his hand, and was facing a five damage clock. Things looked a lot better when he drew and played a Blastoderm, which would be able to hold off Lucas' attack.

However, the 'Derm attacked for five damage on the next turn, and was soon joined by another. Lucas summoned Blazing Specter and attacked, forcing Eduardo to lose a land, which was the only card in his hand. Lucas then played a Thunderscape Battlemage, and both of his creatures split up to chump block the Blastoderms. Just when things looked their worst, Lucas played Urza's Rage with kicker (with an assist from two Dark Rituals) to deal ten damage to Eduardo and win the game.

Eduardo played first again, and did not have any plays for the first three turns. Lucas played a land, and then a Darigaaz's Caldera, putting him behind on mana production for a turn and forcing him to discard Urza's Rage. Eduardo played his first non-land permanent of the game on turn four when he summoned a Blastoderm. It attacked on the following turn, and Lucas was obviously going to have a hard time dealing with it considering that he was stuck at two lands. However, he was able to use a Dark Ritual to play a Phyrexian Scuta with kicker, which could take down the Blastoderm at will. 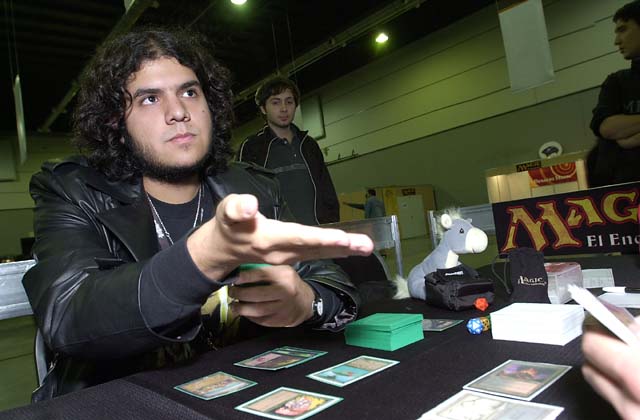 Blocking wasn't a part of Lucas' plan at the time, and he chose not to block the Blastoderm. Eduardo's side of the board became a little more intimidating as he played Kavu Chameleon. Lucas drew, and played his third land of the game. Eduardo attacked with both of his creatures. Scuta traded with the Blastoderm, and Lucas killed off the Chameleon with Terminate, leaving no creatures on the table. Eduardo went right back on offense, playing a Thornscape Battlemage with red kicker, which dealt two damage to Lucas. It also died to a Terminate.

Eduardo now played a Shivan Wurm, bouncing a Birds of Paradise. Lucas answered with a Saproling Burst. Not to be outdone, Eduardo cast a Burst of his own, and ended his turn. Lucas had the answer to this problem, and played Thunderscape Battlemage with green kicker, destroying Eduardo's Burst. A Kavu Chameleon was summoned by Eduardo on the following turn, but he was still hesitant to attack due to Lucas' Burst.

The board position evened out when Lucas summoned a Phyrexian Scuta without kicker. It fell to a Flametongue Kavu, and Eduardo sent the Chameleon and Wurm into combat. Lucas took tokens off the Burst to block the Wurm, and chump blocked the Chameleon with his Battlemage. Lucas then played a Void for five, which eliminated the Wurm and Chameleon, but still left the Flametongue Kavu.

It attacked, and Lucas summoned Blazing Specter, which stayed back on defense. Eduardo tested Lucas and attacked with the Flametongue, and Lucas traded. A Port then showed up on Eduardo's side, and it went to work on upkeep. This still left Lucas with four available lands, and he used them to play Blazing Specter, which attacked. The Specter did its job well, and soon Eduardo had no cards in hand and was looking to topdeck an answer or a threat. Lucas increased his damage clock by playing Thunderscape Battlemage without kicker. In an act of irony, Eduardo drew into Ghitu Fire, which dealt enough damage to win the game.

Lucas went first this game, and Eduardo started strong with a Birds of Paradise. Lucas played a Port, and used it on Eduardo's upkeep. He then played a second Port and a Blazing Specter, which forced Eduardo to discard a forest. Flametongue Kavu was summoned by Eduardo on the following turn, shooting down the Specter. Lucas then used Urza's Rage to kill off the Flametongue, and cast a Thunderscape Battlemage with black kicker on the following turn, forcing Eduardo to lose a land and an Urza's Rage. Eduardo answered back with a Thornscape Battlemage, which took down Lucas' Thunderscape Battlemage. 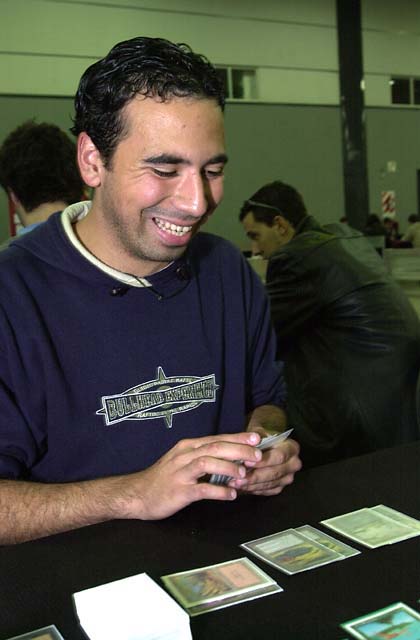 Lucas cast Void for three, causing Eduardo to lose both his Battlemages. He also revealed his hand, which contained Flametongue Kavu and Shivan Wurm. Scuta was now able to attack for five across the empty battlefield. Shivan Wurm came into play on Eduardo's side, bouncing a Bird which came right back down. Another Void was played for five, which took down the Shivan Wurm and cleared the path once again for the Scuta. Both of Lucas' Ports went to work, depriving Eduardo of some mana. Eduardo tapped all his lands and played a Flametongue Kavu, but did not realize that none of them produced red. He tapped his Bird for the necessary red, and took a point of mana burn.

A Saproling Burst then came into play on Lucas' sude, and the Scuta attacked again, and was chump blocked by the Flametongue. A Blastoderm was summoned by Eduardo, and Lucas took three tokens off his Burst on end step. He attacked with all his creatures on the following turn. The Blastoderm blocked and traded with the Scuta, and a Bird chump blocked a Saproling. Things looked even more grim, as Kucas played a second Burst, followed by another Scuta. This was enough to convince Eduardo to concede.