Round 10: Eighteen Minutes of Fury

"Baby Chamby" Chambers is renowned for playing fat, expensive green men in draft events, often to the seeming detriment of his decks. He talked to me after the fourth draft of the weekend and mentioned that he actually had a Patron of the Orochi in the sideboard of his blue-green deck, a move he described as "a big step for me." 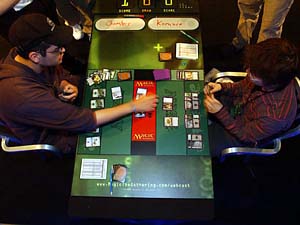 Both of these men have seen the Top 8 spotlight this season.

His opponent took one huge step back in February by winning Pro Tour-Nagoya, vaulting Shu Komuro from relative obscurity into a very bright spotlight. His draft deck seems a bit underpowered this time, sporting few of the fat black or green spirits that really make that archetype hum.

Chambers came out fast in Game 1, tossing down a Minamo Sightbender and Floating-Dream Zubera, plus exchanging one for a Ninja of the Deep Hours while Shu was stuck with only an Ashen-Skin Zubera on his side. Chambers cast a Soratami Savant on turn five and Shu drew once more before scooping up his cards in a game that took all of four minutes to complete.

Both players kept for Game 2, but Komuro had a considerably better opening this time with Petalmane Baku on turn 2 and Gnarled Mass on turn three. Chambers's draws weren't bad either, but Shinen of Life's Roar and Matsu-Tribe Sniper have a hard time dealing with 3/3s. 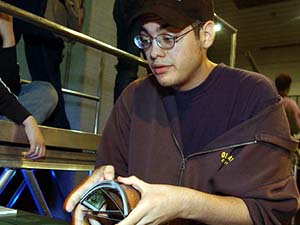 Unless, of course, you add Kodama's Might to the equation, which is exactly what Adam did to take down Bob Gnarly on Komuro's turn-four attack. Shu cast Razorjaw Oni after the attacks, indicating he either didn't have any black cards he wanted to block with any time soon, or he was clearly going on the offensive.

It turned out to be the latter, as Kiku's Shadow took down Adam's one blocker, and Okiba-Gang replaced the Petalmane to rip two cards from Adam's hand and take Chambers life total to 13.

The attacks from both players were lightning fast and Komuro got Chambers to three before double-ninja action (including a Mistblade Shinobi) came on line, followed by Minamo Sightbender, letting Chambers bounce the Oni and dissipate all of Komuro's pressure. Two more swings from Adam's men and he had mounted a very hearty comeback, giving Komuro his fourth loss of the weekend in only 18 minutes' time.