The specter of the Faerie deck hung over this tournament in the days leading up to it, and though their turnout didn’t hit the doomsday predictions of some, they still accounted for a quarter of the tournament. Fast-forward to Day 2, and many of them have survived in the hands of skilled pilots, such as Brazil’s Paulo Vitor “PV” Damo da Rosa and reigning Dutch National Champion Robert van Medevoort. They knew they were in for a mirror as they shuffled up.

PV’s first hand was a bit of a clunker, so he sent it back. His reward? Six nonlands. He quickly went to five, shaking his head. His first two turns were playing a Mutavault and then attacking with it. Meanwhile, van Medevoort was suspending Ancestral Vision and dropping Bitterblossom. PV took the opportunity to main-phase a Scion of Oona. 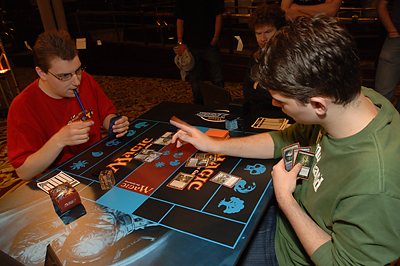 Robert van Medevoort and Paulo Vitor Damo da Rosa are both packing Faeries Van Medevoort untapped, then went for the gusto with a second Bitterblossom. For good measure, he suspended a second Vision. PV started to send his Mutavault, keeping the Faerie population somewhat in check. The second time, van Medevoort tried to interpose a Vendillion Clique, but Spellstutter Sprite sent it to the bin. Van Medevoort was still waiting on his fourth land.

Finally, his first Vision went off and gave him the land he needed. PV’s team charged in, and this time it was Mistbind Clique that came to play for van Medevoort. PV handed it a Rune Snag. Van Medevoort traded two Faerie Rogues for the Spellstutter, and chumped the Mutavault. After untapping, his Bitterblossoms took him to 11.

PV didn’t have any action, but van Medevoort was running out of time. The next turn he got to cash in his second Vision, earning himself a Pendelhaven and another Clique to drop in PV’s upkeep. This time, PV had Terror but chose to play it before van Medevoort championed, allowing van Medevoort to remove one of his Bitterblossoms from the game permanently.

PV was out of gas, and the tide began to turn in van Medevoort’s favor. Soon he was sending his growing army of tokens into the red zone. PV fell to 15, then 10. He tried to intercept with a Mistbind Clique of his own, but lost it to Rune Snag. His last ditch was Cryptic Command backed by Spellstutter, but van Medevoort had Snag and Spellstutter in hand, securing the game.

He tried to stall the tide with Cryptic Command, but PV had his own to counter it and send van Medevoort’s Conclave back to his hand. Van Medevoort fell to 4. A second Command succeeded, catching PV’s Vision and locking down his team, but that only bought him a turn. Soon they were shuffling up for Game 3.

Meanwhile, PV was shaking his head, chiding himself for a mistake. “Could’ve won last turn,” he said. Terror on his Clique would’ve freed Spellstutter Sprite to counter the Command, with enough Faeries left over to deal the remaining 4.

The deciding game saw both players with turn-two Bitterblossoms, but van Medevoort’s opening was flanked by Vision on turn one and Pendelhaven and Thoughtseize on turn three, a brutal opening. He took PV’s Cryptic Command and left him with three land and a pair of Rune Snags.

PV was in a bind. Van Medevoort added Mutavault to his team, and began the aerial assault, his Pendelhaven giving him a free pass from PV’s tokens. PV took a turn to carefully assess his situation, eventually suspending a Vision of his own, while van Medevort’s was already paying off. He took a couple more hits, feigning a four-mana spell. On his upkeep, van Medevoort went for an actual Mistbind Clique. PV spent both his Rune Snags, and took the opportunity of a tapped Pendelaven to hit with his tokens and a Mutavault, bringing van Medevoort to 9.

That was as close as it would get. Van Medevoort’s counterattack took PV to 7, and with Pendelhaven back online, PV couldn’t punch through for more damage.