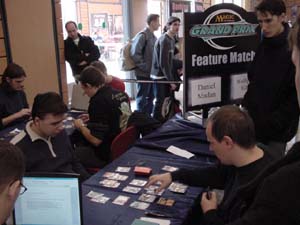 Wolfgang is a player with a very good resume. Why haven't we heard too much about him? He's from Germany, nuff said. Daniel is the undefeated amateur of Grand Prix Lyon, so when he keeps up the pace, he can net not only whatever he wins in the main event, but also leaves Lyon with the amateur prize money - $1500. Not bad a deal for playing Magic for one weekend. There are times I don't make that kind of money playing...

decided to start and had to take a mulligan. Wolfgang kept.
Atog for Daniel, Leonin Den-Guard for Wolfgang were the first creatures that entered the battlezone. When Atog attacked, no blocks were assigned, so Daniel followed with an Iron Myr.

Wolfgang built an Oblivion Stone on turn 3, while Daniel's Atog ate the Myr to do some extra damage. Auriok Scavanger returned the Myr, while Wolfgang protected his Den-Guard with a Fate counter from the Oblivion Stone. Myr got himself replayed and Wolfgang built a Hoversail that got attached to the Den-Guard.

Den-Guard stayed untapped while serving for 2, thanks to some usefull abilities. Then a Loxodon Punisher was summoned by Wolfgang. It got Irradiated at end of turn.

Daniel's Atog kept attacking, but it was not followed by any spells, so Wolfgang made some more threats: Skyhunter Cub and Slagwurm Armor were added. They served for 5 on the next attack, because Daniel chose not to cast anything again, but attacked with the Atog into the Den Guard instead. 1 Myr pumped the Atog to 3/4 and an instant speed Tooth of Chiss-Goria made the Atog big enough to kill the Den Guard.

It got replaced by another one, while Daniel could only make a Goblin Replica.
That Replica was sacked immidiately to get rid of the Slagwurm Armor, so the Scavanger could block the Cub; the Cub got +1/+1 from Roar of the Kha and Daniel conceded. 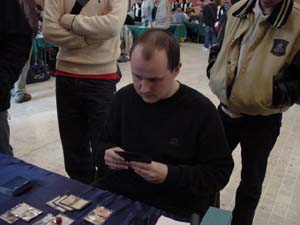 Daniel kept and Wolfgang could handle his opening hand too.

Wolfgang blazed his first two drops from his hand: Slagwurm Armor and Banshee's Blade, followed in turn 3 and 4 by another Blade and Sword of Kaldra. They were all nice equipment, but you would still need creatures to use the tools succesfully.

Daniel, in the meantime, cast real creatures that beat: Iron Myr, Yotian Soldier and a turn 5 Rustmouth Ogre along with a Tooth of Chiss-Goria. When the Ogre attacked for the first time, the Sword got disenchanted and when Wolfgang's deck did not provide him with any good creatures, the Toothed Yotian, Rustmouth Ogre and Pyrite Spellbomb are enough to secure a turn 7 win. Impressive...

Wolfgang had a 4 land, 3 equipment opening hand while Daniel had to start, so he took that understandable risk.

Wolfgang would not take any more risks and mulliganed after not too much thought. Both players talked a little about their decks while Wolfgang tried to shuffle his deck some more and both were agreed in playing 14 creatures this match; friendly atmosphere. Wolfgang mulliganned again, so he would have to try to beat Daniel with only 5 cards in his opening hand AND start the game. 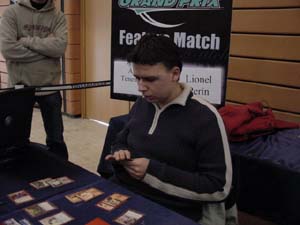 Daniel seemed to be the most relaxed guy in the world right now and Pyrite spellbomb for Daniel and Leonin Den-Guard for Wolfgang were the first plays of the last game. The Den Guard got Terrored, but he was followed by Yotian Soldier and Neurok Hoversail.

Daniel could make a Vulshok Berserker, but choose not to attack yet and waited to have mana enough to Spellbomb the Soldier. When he attacked the next turn, Wolfgang thought he was saving the Yotian with a Raor of the Kha, but Daniel backed up the Berserker attack plan with not only the Spellbomb but also Irradiate.

Wolfgang was out of gas, so when Daniel built a Spikeshot Goblin and Disciple of the Vault and attacked a turn later, Wolfgang's last play was Raise the Alarm.
Imagine this: you kept a 5 card opening hand and played 7 lands straight; only to lose because all of them were plains. Wolfgang showed Daniel a hand full of very good red spells, but was not able to cast any of them without mountains to tap.