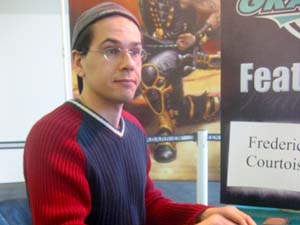 people talk about the best French players in the Pro Tour right now, they invariably mention younger players like Gabriel Nassif. But there is a whole legion of older players who, despite not getting as large a spotlight as the young bloods, have been a constant force in the European circuit and the Pro Tour as well.

Hamon's name is probably on everyone's mind right now. He is not only one of the players responsible for turning Mana Severance into a case rare, but also can take credit for turning the last Extended Pro Tour into a massive goldfish race. Courtois' name might not have the same recognition but he is widely respected as a deckbuilder. Anyone who kept an eye on the decklists that pop up at Grand Prix or Pro Tour events has probably seen a deck built by Frederic Courtois.

The best Frederic could do was Nim Replica and Yann Hamon promptly had a solution - Spikeshot Goblin. In fact, given enough time, the goblin could eat up Courtois' whole army

Frederic: "I have two options here."

He finally decided to play Flayed Nim and drop Yann to eight. This apparently completely dazzled Hamon. He spent a couple of silent minutes staring at the board, trying to figure out what to do. Eventually he sent the Chosen and the Hoverguard-powered Berserker into the Red Zone. Courtois tumbled to six.

Frederic took a few minutes to think about life during his turn and fired a three-point Consume Spirit at Yann's dome going up to nine and dropping his opponent to five. Spikey iced a Myr, untaped and killed Nim Replica.

Again Hamon's duo of Chosen and Berserker waltzed into the Red Zone. Courtois dropped to four, but Yann's careful planning was to no avail. Courtois untapped, attacked with Flayed Nim and flashed Predator's Strike.

With half the round's time gone, they shuffled in a hurry. Yann played second turn Myr, third turn Vulshok Beserker, fourth turn Hematite Golem. Courtois didn't seem too worried. He even took a few seconds to pose for the picture. 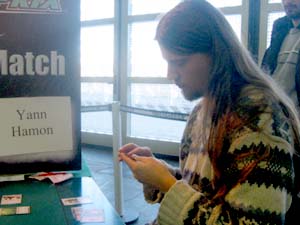 He used Predator's Strike to ice the Beserker and set his Viridian Longbow to work. Still, Hamon was in no mood to slow down. Every single turn he sent his crew in and dropped an extra creature.

Courtois sat behind his Longbow carrying Slith Bloodletter and Icy Manipulator trying to balance things out. Hamon was in mood for balance. He found Pyrite Spellbomb and killed the lone blocker sending his four creatures. As if that wasn't enough of a puzzle for Courtois to solve, Yann Hamon dropped Mindslaver.

Obviously Frederic had to think. He slouched on his chair and tried to formulate a decent plan. After several minutes without an epiphany he shrugged and gave Hamon the chance to blow up Mindslaver. Which he promptly did.

Hamon took Courtois' turn. Frederic let him go through the motions for a while (tapping the Icy, attacking with his potential blockers, using Consume Spirit in a very suboptimal way, before picking up his cards.

Courtois had to mulligan and missed his second land drop twice. He sighed while Hamon dropped Spikeshot Goblin, Vulshok Beserker and Viridian Joiner. Frederic's deck failed him once again, and defeated, he extended his hand.