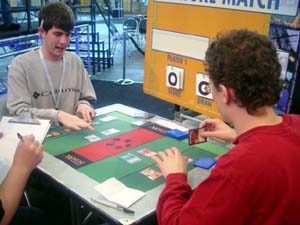 Zajdner proclaimed himself a casualty of the CMU/TOGIT themed round of features. While Andrew Cuneo is not the most well known member of the powerhouse American team but he is one of the original core members going back to the days of Alpha. He is also one of the most highly regarded deck builders by Pros in the know.

Quietly his blue-white Mind's Desire deck has been tearing up the PTQ circuit and has qualified a handful of players. Andrew had fallen away from the game but since winning the online qualifier for Worlds last year he has been seen on the Tour with more frequency than in years past.

Zadjner is part of a brash new crop of Canadians that have been threatening to become a force on the Pro Tour since Richard Hoaen's Top 8 finish in Yokohama. Both players were 6-3 and were clinging to a Top 8 hope. Another loss would most likely eliminate either of them from Sunday contention (although nobody seems certain how nine rounds of play after the first cut will affect the points needed to make the cut to Top 8!).

"Why do I get a feature this round? I mean Andrew Cuneo? No offense but who is Andre Cuneo?" Cuneo seemed more bemused than offended.

"They don't feature me vs Ben Rubin or Bill Stead-someone I can beat! That's what I meant dude! You have Molder Slug, Arc Slogger, two Spikeshots and Grab the Reins!" He forgot to mention a Loxodon Warhammer. "If I win this I will go crazy. I must be a 5:1 underdog-the only way I can win is mana screw. It is the best deck vs the worst deck."

Andrew was hesitant, "I'll grant you it is pretty bad but it isn't the worst."

Zajdner was quick to fire back, "Whose is worse?"

Cuneo was not up to the challenge, "I'm having a hard time answering that."

Andrew won the roll and quickly announced he would keep his opening hand prompting a gnashing of teeth from the Canadian. Cuneo summoned a Spikeshot on turn three and Mark played a Krark-Clan Grunt. Cuneo played a Viridian Joiner on the next turn but had no land causing Mark to arch a hopeful eyebrow.

He untapped and made a Goblin War Wagon. Cuneo was still stuck on three but had a Deconstruct for the Wagon. The spell was fizzled when Mark sacrififced the wagon to the Grunt and Andrew passed the turn with no play.

Zajdner dropped a Great Furnace and cast his Mind's Eye. Cuneo fell to sixteen on the attack of the Grunt. His land powered out an Arc Slogger and Mark sighed deeply, "Not bad".

He played a Nim Replica and attacked with his Grunt. Andrew blocked with the beast and Mark was happy to trade his Nim, Mind's Eye and Great Furnace to first strike it to death.

Despite playing a Skelton Shard Mark just scooped two turns later when Andrew played a second Spikeshot Goblin. "Yeah, that's game. I told you my deck is the pissest-and this is the round I get a feature!" 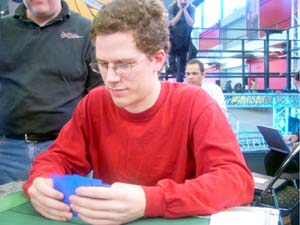 Mark was still complaining to everyone who would listen-and even a few who wouldn't-about his misfortune at being featured this round. Andrew tried to mollify him by explaining that his deck was not as good as Mark was making it out to be, "Seriously, when I laid out my deck I had only eighteen cards i wanted to play."

Mark would not be mollified, "But fifteen of those you really wanted to play with."

Andrew tried a different approach, "If you had drawn your Duplicant for the Arc-Slogger it would have been a different game-especially with the Skeleton Shard."

"C'mon, you have so many ways to deal with an artifact... This deck is sour-just sour!"

Mark kept his opening hand with a shrug but started chanting, "FIVE! FIVE! FIVE!" when his opponent mulliganed. The chant caused fellow Canadian Josh Bennett to look over from the match he was covering and proclaim, "You are a black-hearted human being."

"Are you kidding me? His five card hand would probably beat this terrible hand. I just can't afford to muck a hand with lands in it against him."

Josh looked over Mark's shoulder and nodded, "That is an accurate assessment."

It would not come to that as Andrew was happy with his next six. Mark led off with an Aether Spellbomb. He played a black spellbomb and a Disciple of the Vault on turn two and passed the turn back to Andrew who played a Scythe of the Wretched.

Andrew fell to eighteen between an attack and a cycled spellbomb. He untapped and played a Spikeshot Goblin. "Oooh, you're good," cooed Mark. He checked that it took four to equip the Scythe and that he still had a Shatter in hand and played a War Wagon.

Andrew tapped out to equip the Spikeshot and sent the turn back. He had no blocks on Mark's turn and fell to thirteen. Mark played a Krark-Clan Grunt. Andrew played a Tel-Jilad Exile and passed the turn back with red mana to activate his goblin.

Mark untapped his Wagon but had no attacks. When Andrew attepted to smoke the Grunts EOT, Mark shattered the equipment and the Grunt took only one. "I hurt its feelings at least." 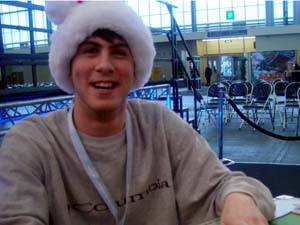 Andrew played a Fangren Hunter and passed the turn back. Mark realized he had missed a point with his Disciple when the Scythe was shattered and shook his head, "I hate this sour deck!" He played out the remaining cards in his hand-a Nim Shambler and a Mindstorm Crown. Andrew shot the Disciple EOT and untapped with a Creeping Mold for the Crown.

"That is just lovely. How many cards do you have in your hand-two? I am out and you have two. See, you could have gone to five and still been winning this game. You haven't drawn any bombs and you are winning."

Like the last game, a second Spikeshot prompted a scoop.

1 Wail of the Nim 1 Shatter