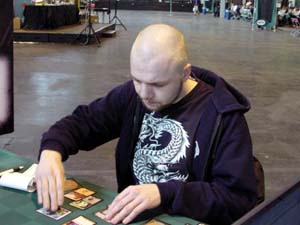 players got to the feature match area nice and early and exchanged some friendly banter. Herzog was expecting to get slaughtered at the hands of Olivier. "If I do anything before turn six it's a miracle!" declared the Norwegian.

Herzog wins a guessing game and chooses to play first.

Herzog led with double Swamp, Olivier double Plains and an Iron Myr. Nicolai had no T3 play, while Olivier had a Talisman of Unity and a Razor Golem. Nicolai untapped and Dismantled the Golem. Olivier's next turn produced a Leonin Skyhunter and another Razor Golem! Nicolai dispatched the patrol on his turn with an Essence Drain, and took three from the Golem down to 20.

Olivier further developed his board with an Auriok Glaivemaster and an Auriok Transfixer. Nicolai made himself an Atog and a Drill-Skimmer. The Atog tried to take down Olivier's Razor Golem with the help of an Irradiate (Nicolai had two artifact lands in play), but Olivier had an Awe Strike ready to save his Golem.

Olivier made a Leonin Battlemage and Nicolai an Auriok Bruiser. Nicolai began to nibble at Olivier's life total with his Drill-Skimmer but the Frenchman was looking to be in a much better position overall. He made a second Transfixer, tapped down the Bruiser and sent in his troops. Nicolai's Razor Golem ran into Nicolai's Atog, and Nicolai sacrificed his artifact lands. Unfortunately for Nicolai, Olivier was at the ready with a Battlegrowth, and the Leonin Battlemage chipped in to keep the Golem alive. Unfortunately, Olivier had overextended with his Battlemage, and was short the extra point to finish off the Atog. Still, with Nicolai's artifact reserves depleted, the 1/2 looked mediocre at best.

Nicolai's next turn yielded no attacks and no plays. Olivier swung in again, and after blocking Glaivemaster and Myr with his Atog and Drill-Skimmer, Nicolai sacrificed his tapped Arcbound Bruiser to give his Atog +2/+2 and add three +1/+1 counters to his Drill-Skimmer.

The Transfixer tapped the Drill-Skimmer down, and Olivier swung in with his team bar the Battlemage. Nicolai kept his Atog out of combat, and Electrostatic Bolted an Auriok Transfixer in response to Olivier's attempt to pump it with the Battlemage.

Nicolai made an Auriok Siege-Sled and passed over to Olivier! The tables had turned, and all of a sudden the Frenchman wasn't looking so good. Olivier played a Bonesplitter, his Battlemage boosting itself in response, and then equipped the Bonesplitter to the Battlemage and attacked, one card in hand. Nicolai considered the situation briefly, and elected to double block with Sled and Atog. The Sled and Battlemage traded.

Olivier moved the Bonesplitter to his Transfixer and passed the turn. The Transfixer still keeping the Skimmer at bay, Nicolai had nothing else to do. Olivier made a Wurmskin Forger on his turn, electing to put all it's counters on itself. Nicolai had no attack with his Skimmer tapped down, but made a Cobalt Golem. On Olivier's next turn, Nicolai found himself having to trade his Atog, an artifact land and a his newfound Golem to take down the Forger.

Nicolai's Irradiate took down Olivier's Transfixer, and suddenly the 5/4 Drill-Skimmer was attacking. A Vulshok Battlegear on the next turn finished the Frenchman off.

Bizarre sideboarding ensues, as Olivier brings in Tooth and Nail for Nicolai's removal-heavy deck, while Nicolai brings in a Leonin Bladetrap for Olivier's weenies!

After some deliberation Olivier elects to play first, then has to mulligan. His six card hand was equally unsatisfactory, and he unhappily kept on five. Olivier was looking very bad going first against Nicolai's seven card hand, considering the plethora of removal spells in Nicolai's deck.

Nicolai mentions, as Oliver shuffles, "You know what I did in this draft? I took Battlegear over a blue Myr, for no apparent reason." Olivier looks surprised, and this reflects one of the more unusual things about this format - a mana acceleration monster is way better than a +3/+3 reusable powerup! This is especially true in Nicolai's deck, with so many expensive and artifact-intensive spells.

Olivier made a turn one Transfixer, then both players just laid lands for a couple of turns, but neither had a play until Olivier's turn four Bonesplitter. Olivier had no fourth land, only two Plains and a Forest in play, frustrated with at least one Razor Golem in hand. He elected not to equip the Splitter and attack, instead using the Transfixer's ability to tap Nicolai's Seat of the Synod during his upkeep. Nicolai laid a second Seat, and Olivier equipped a Bonesplitter to the Transfixer, and swung in for three. Nicolai triumphantly dropped a Leonin Bladetrap into play, but Olivier points out that he needs to pay mana to sacrifice it too! Both players laugh Nicolai's mistake and at how bad the card is.

The next then Nicolai Bladetrapped the incoming Transfixer, but Olivier has Razor Barrier, de-equipping his Bonesplitter. 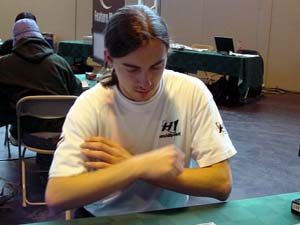 Olivier finally found another land in the form of a Forest, and played a Razor Golem. Nicolai bounced it with Echoing Truth, swung in, and made an Arcbound Bruiser. Olivier gave in here and scooped - Nicolai's hand still contained Irradiate (with his multiple artifact lands), Essence Drain and Betrayal of Flesh!!