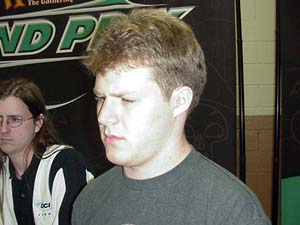 we had a pair of feature matches in which the engaged Patrick Sullivan and Kate Stavola played their games side by side. Today we had a pair of cousins. People have been calling this tournament the farewell concert for CMU. Eugene Harvey is moving from Pittsburgh back to Jersey. Mike Turian is moving to Seattle--and retiring from the game. They were playing each other one table away from this round's match with Nate Heiss sitting next to his gregarious cousin Mike. Nate made the finals of Grand Prix Kansas City and is well known as a columnist on Star City and this very site.

His opponent was an infrequent contributor to the Magic websites with as impressive a Pro Tour résumé as you can find. Ben Rubin is a former US National Champion, World Champion, Pro Tour winner, and most recently Grand Prix Anaheim winner. With yet another Day Two performance and trips around the world to Amsterdam and Kobe the story of Ben Rubin as casual Magic player was wearing a little thin

Nate came off the block fast with an Auriok Transfixer, Arcbound Worker, and Skeleton Shard. Ben cycled a couple of Spellbombs into a Neurok Prodigy. Nate had Goblin Wagon on turn four and Ben had a Thirst for Knowledge EOT which concerned Nate, "He is drawing a lot of cards…"

Ben had Islands and Mountains in play but a handful of black cards. He discarded Frogmite to the Thirst and untapped to play Elf Replica. Nate made a Razor Golem and sent his team toward the red zone. Ben ate the Worker and the Razor Golem swelled to a 4/5.

Rubin untapped and played a Glimmervoid and Megatog with two artifacts in play. Nate untapped his War Wagon--he only had four land in play so it was not without debate--and sent his Golem into combat to force Ben to eat his Elf Replica and block with Megatog.

Ben untapped and played a Wizard Replica and Arcane Spyglass. He sent his Tog across the table and Nate put the Worker he had regrown last turn in the way. Ben sacrificed a Seat of the Synod and did five points of trample to the CMUer. Combined with the 2/1 flier, Nate fell to eleven.

Nate had a handful of goodies including Fireball and Essence Drain but chose to cast Taj-Nar Swordsmith and activate it for one to retrieve a Leonin Bola from his deck. It would negate the Tog--if he lived long enough to untap and equip a creature with it.

Ben ate a land with his Spyglass and drew into Swamp. He debated where to put a Relic Bane and eventually it landed on the Shard. Ben attacked with everyone. Nate had to put the Wagon and Swordsmith in the path of the Megatog lest he fall to two life. Ben sacrificed both of his artifacts and trampled over for a bunch. Nate just squeaked past his next upkeep at one life but with only Auriok Transfixer to work with there was no miracle to be found on top of his deck. "Stupid Relic Bane!"

Nate was not happy with his deck and asked the former World Champion, "Do you believe me that my deck is bad now? My hand wasn't even bad that game but you destroyed me."

Ben agreed that Nate's deck was bad, "I had real cards."

Nate mentioned Ben's penchant for Affinity decks and Ben smiled, "My dream is always to have a deck with artifact lands, affinity creatures and removal. But there are actually two other decks I can draft now--I have branched out. I can draft blue-black and black-red."
Nate had the Transfixer to open again and it attacked for two brandishing a Scimitar the next turn. Ben had Vedalken Engineer and Nate protested, "That guy is insane." He got in for another two points and played Skeleton Shard.

Ben went to tap his Engineered and Heiss pleaded, "Please be attacking." When Ben did attack he gladly ticked off a point on his life tally. Ben cast Frogmite thanks to a Seat of the Synod and it traded with the Transfixer next turn. Nate had a Yotian Soldier post-attack and equipped it.

Ben cast a main phase Thirst to find land number four and was rewarded with Swamp. Nate dug out a Viridian Longbow with Taj-Nar Swordsmith. He cringed when Ben tapped his Engineer for mana but relaxed when the spell turned out to be a Spyglass.

Heiss put the Longbow in the Yotian's hands and attacked with both his men. Ben Barbed Lightning-ed the 2/3 and took two and Nate shot down the Engineer. When Ben tapped six mana--two of which were artifact lands--he asked dejectedly, "Megatog?" Megatog indeed.

Nate cast Chromatic Sphere and announced Myr Enforcer and then cracked the Sphere. With his floating mana he equipped the freshly minted Enforcer. Ben swapped a land for a card on his turn and Nate teased, "Is my Yotian Soldier too much for your Megatog?"

Nate played Welding Jar and attacked with his 5/5 Enforcer. Ben used Irradiate for three and blocked it with the Tog. Nate let it die and was able to grow it back and recast it with the Shard. Ben drew another card but had to pass the turn again without a good attack.

Nate attacked and Ben allowed damage to go on the stack without incident. Wail of the Nim regenerated the Tog. Nate had a Skyhunter Cub and moved the Scimitar over to it as quickly as is possible at sorcery speed. Ben cashed in his third land for a card and the three counters on Spyglass for another. With time running out he decided that he was going to emerge on the losing end of the battle and opted to move onto Game 3.

Nate dropped Welding Jar, Chromatic Sphere, and Vulshok Gauntlets over the first two turns but had nothing to do with any of it. Ben meanwhile had a Neurok Spy and followed with Neurok Prodigy but missed his fourth land drop. 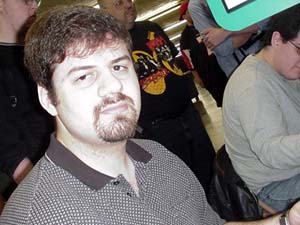 Nate had a Flayed Nim on turn four but it looked to be too slow when Ben played Bonesplitter and attacked for six. Nate made some of it back with an Essence Drain on the Spy but Ben kept coming. He equipped the flier and played a Grimclaw Bats.

Nate cast a Skyhunter Cub that could hold the air if he got to untap and equip it but he had to take five in the air first--he fell to six. He moved the equipment and played a Worker but Ben flashed him a pair of Barbed Lightnings and the mana to use them both between Nate's EOT and his own upkeep.