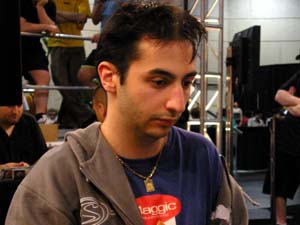 the rise of Gabriel Nassif, it's easy to lose sight of the old-schoolers who paved the way to make French Magic what it is today. Levy has a pair of Pro Tour Top 8's from before the turn of the millennium. Since then he's been a Pro Tour mainstay. His opponent, Andrew Cuneo, was once the biggest up-and-comer in American Magic, after a pair of Team Pro Tour Top 4's with Andrew Johnson and Aaron Forsythe (as Car Acrobatic Team). He returned to the spotlight when he won the World Championships qualifier on Magic Online.

Levy led with a Cloudpost and played a third-turn Tel-Jilad Wolf. Cuneo Raised the Alarm at end of turn and then sat on three plains. Levy hit for two and added a Juggernaut to the table. Cuneo's lack of concern proved justified when he played a mountain and dispatched it with Echoing Ruin.

Levy hit again. Without a fifth land he tapped out for Karstoderm. Cuneo got a frown out of him when he dropped Icy Manipulator on his fifth turn. Levy showed a second Cloudpost (how lucky!) and a Tel-Jilad Exile. Cuneo made a not-so-impressive Clockwork Condor. Levy bashed and left him at ten. His abundance of mana let him drop Fireshrieker and Troll Ascetic. Bad times, indeed.

Cuneo needed answers. Mask of Memory let his Condor draw him a little deeper into his deck. He locked down the Exile and the rest of Levy's creatures attacked. The Soldier Tokens stepped up to fight the Wolf and Karstoderm, and Roar of the Kha made sure they'd both fall. Cuneo's life dropped to four from the Ascetic. The hits kept coming when Levy brought out a Myr Enforcer.

Cuneo's Condor got him some more cards and he powered out a Loxodon Mystic and a Goblin Archaeologist. Levy moved his Fireshrieker over to his Exile, which was tapped, and hit with his other creatures. The remaining token dove in front of the Enforcer and Cuneo dropped to one. He untapped, put Banshee's Blade on his Condor and swung in. He discarded Solemn Simulacrum to the Mask's effect and played a plains, leaving himself with one card: Pulse of the Fields. He showed it to Levy on the following turn. Levy looked like he'd been punched in the gut.

With the buffer from the Pulse, Cuneo started building up. He lost a Skyhunter Patrol to the Fireshrieking Ascetic, but soon Levy was on the defensive. Cuneo dropped Transfixer and a second Mystic, and eventually locked down Levy's team, save the Troll, and put down a Blinding Beam. Two attacks was enough to win it.

Levy started strong with an opening barrage of Spawning Pit, Troll Ascetic and Tel-Jilad Exile. Cuneo wasn't idle in the meantime. He cast Raise the Alarm and then Leonin Den-Guard and Auriok Transfixer but had nothing to deal with the 3/2 powerhouse. He took some more pain and finally had enough to muster a Razor Golem. Levy Shattered it.

His Clockwork Condor was tied up but the Ascetic kept hitting. Cuneo made no play and blunted the assault with Pulse of the Fields. Levy made things much, much worse with Mindslaver. Cuneo made a go of it, but with Karstoderm showing up on the otherside and Levy set to steer his team off a cliff, he decided to move to Game 3.

Levy played out Leonin Scimitar and then Iron Myr, while Cuneo once again had his second-turn Raise the Alarm. He hit and followed up with Arcbound Stinger. Levy, with four mana, was in the think tank. Eventually he decided to tap three and bust out the Ascetic. Cuneo made a sour face. It picked up the sword and Levy ended his turn.

Cuneo was not hitting quite as hard, but Banshee's Blade on his Stinger was a good start. Levy ran his troll into a Soldier Token and then stopped the Stinger with a Clockwork Condor, a 4/4 thanks to the Scimitar. Cuneo got ready to clear a path with Loxodon Mystic.

Again, Levy considered his options. He sent the Troll, and Cuneo accepted three damage. Then came an avalanche of Tel-Jilad Wolf and Fireshrieker. Cuneo dropped Mask on his Stinger and tapped down the Condor. Razor Golem tapped him out. Levy put the Fireshrieker on his Condor and bashed in with it and the Wolf. Cuneo accepted the beats and went to seven. Levy had no further play. 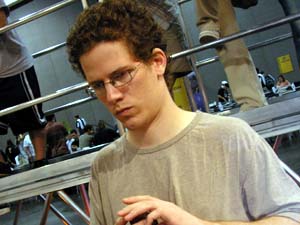 Cuneo hit with his Stinger again, but Shatter took care of the Mask. He played a Leonin Den Guard. Levy moved his Fireshrieker to his Ascetic and the Scimitar to his Iron Myr. The Mystic locked down the Wolf and the Condor and Ascetic charged. The token took one for the team, but the Condor got in for two, leaving him at five. Levy ended his turn. Cuneo turned over Pulse of the Fields.

Cuneo was visibly frustrated at his misplay. He could have Pulsed before the Condor hit him, and probably taken control.

1 Echoing Ruin 1 Pulse of the Tangle