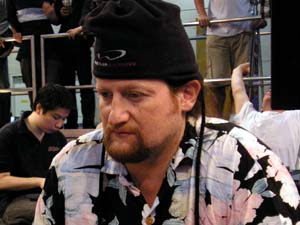 "Danger" Taylor (EDT) has been around for what seems like forever. He's one of a rare breed of older players who hang out with a younger crowd and it absolutely seems like they belong. His opponent, Carlos Romao, won the World Championships in 2002 and has since been doing quite well for himself on the Tour.

Eric won the right to play first and opened with Auriok Glaivemaster and Wizard Replica. Carlos answered with Chittering Rats to gain some card advantage. EDT had a fourth land and played out Nightmare Lash, but only had one Swamp. He paid the three life and equipped it on his Glaivemaster and attacked for three, taking Romao to 15.

Wizard Replica was left back on defense only to die to an Electrostatic Bolt. Chittering Rats pecked for two points and Nim Replica came down on Romao's side. EDT found a second swamp but had to pass the turn without attacking. Carlos just fortified his side with a Grimclaw Bats and Nim Lasher.

EDT again laid a Swamp and ended his turn, with the Glaivemaster now a 5/5 first striker. Romao sent the Bats in, pumped once, added a flier in the form of Clockwork Condor, and was done. Swamp from EDT. Carlos just hit for four, declining to pump, and passed the turn back.

EDT called out "Swamp" and pulled the top card off his deck. It was indeed a Swamp and he slid it into play, rolling his eyes. "I called it."

Romao hit for four again after pumping the Bats once, taking Eric to a precarious four life. He announced the end of his turn and joked, "Swamp?" as EDT reached for his card. It seemed to be a spell, however, as EDT lapsed into thought and asked Romao's life total. His 7/7 Glaivemaster attacked and Nim Lasher jumped in front.

When Nim Replica and Grimclaw Bats swung back, he found some soldiers with Raise the Alarm and slid one in front of the Replica. Carlos reached for his swamps and tapped one, then two, then three, pumping with each. EDT could only pick up his cards, saying, "You got it."

EDT started out with two Swamps and Specter's Shroud while Romao had Gold Myr as his second turn play. EDT added Wizard Replica and was denied a card when Romao played out Chittering Rats, leaving a Mountain up. EDT showed no fear of Electrostatic Bolt, however, and equipped the Shroud and sent.

It hit for damage and Carlos pitched an Alpha Myr. Chittering Rats cracked back for two and Pewter Golem joined the team, only to immediately hit the graveyard thanks to Echoing Decay. The shrouded Wizard Replica stripped an Arcbound Fiend and EDT summoned Auriok Glaivemaster and a second Wizard Replica.

All Carlos could do was play out his hand: Disciple of the Vault, Grimclaw Bats and Copper Myr joined the fray. EDT moved the Shroud to his Glaivemaster and attacked with the team for five. Carlos attacked back but a soldier materialized off of Raise the Alarm and traded with the Disciple. He then played out a Skeleton Shard, a fine threat.

Still, he was under a lot of pressure. Eric sent the team again

Carlos summoned Disple of the Vault, Grimclaw Bats, and Copper Myr, and had no cards left in hand. EDT switched the Shroud to the Glaivemaster and attacked with the team for five. He then moved it back to a Replica.

Chitter and Disciple attacked but Eric had Raise the Alarm. A Soldier traded with the Disciple. Carlos played out Skeleton Shard, a fine threat. EDT made the obvious play of sending the whole team again. Romao's two Swamps meant that he could kill a Wizard Replica, but it cost him two life and suddenly he was down to five.

Relic Bane on Skeleton Shard sealed the deal. After he drew his card for the turn, he realized it was hopeless and scooped his cards.

Paul Rietzl, from the crowd - "EDT…back where he belongs. In a Feature Match."
EDT - "This will be my only Feature Match for today. After I lose this one."

The picture of confidence, EDT started off Game 3 with Slagwurm Armor. Carlos matched with Banshee's Blade and Eric played out Scythe of the Wretched.

As a side note, I love when games begin like this. Both players spend the first few turns laying out their personal armory and then finally the creatures start coming out to pick up the toys.

Well, that was true for Romao anyway. Chittering Rats hit play on turn three and then chittered their way into the red zone for two. Clockwork Condor also joined the party. When the Rats picked up the Blade, Echoing Decay wiped them out. Carlos summoned Copper Myr. On his next turn the Condor picked up the Blade and attacked, then Romao added a Pewter Golem.

What was EDT doing during all of this? Well, he played an anemic Scale of Chiss-Goria on end step, then drew and played his first creature of the duel-Razor Golem. Carlos showed no fear of the Scale-backed Golem and attacked with his own Golem in a possible bluff. EDT bit the bullet, closed his eyes and pushed his man in front. Tooth of Chiss-Goria trumped the Scale (Tooth fans everywhere rejoiced) and EDT was even further behind than before. With a hand of two Razor Barriers and a draw step that yielded Scavenging Scarab, EDT was put of his misery quite quickly. 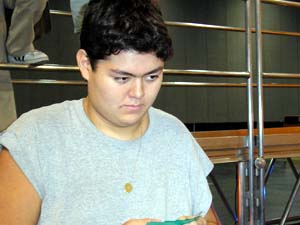 As he packed up his cards he wondered if blocking was the right call. He looked up at Carlos, saying, "The thing is, the damn thing regenerates so I couldn't tell if you were sending it for the hell of it, just to see if I would take it. Maybe I shoudn't have blocked…"

In any case, Carlos showed him a Shatter that could have killed the Razor Golem after combat. Eric's hand of double Razor Barrier combined with a lot of ultimately useless equipment left him without any sort of chance to win the game.