As is customary for the first round of day two I feature the battle between the players with perfect records at the top of the rankings. Today it is Thomas Preyer and Tiago Chan. Thomas Preyer's glory days were back around 2000-2002 when the Austrian player managed three Grand Prix top 8's and finished runner-up at Pro Tour London. Tiago Chan is from Portugal and is a regular fixture on the Grand Prix circuit although as of yet he is still to make a big splash. 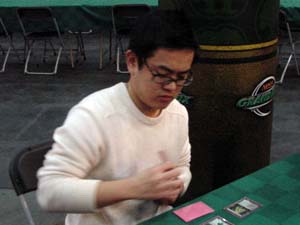 Tiago Chan's hands are TOO FAST for the camera

Chan drafted a Golgari deck with lots of nice stuff like multiple Shambling Shells, but also a bit of stinky filler. Unfortunately for him the dredge on his Shells is a fairly big disadvantage in this matchup as Preyer has a milling Dimir deck.

Chan won the die roll and elected to kick off. His third turn Shambling Shell ran into a Lorebroker and Preyer began the remorseless milling of the Dimir strategy with Duskmantle. A Consult the Necrosages put a crimp on Chan's hand but the Portuguese player was able to bust out a Bramble Elemental. He followed it with a Mortipede. Against the four power monsters Preyer's Entrancer wasn't much of a wall.

The Austrian still blocked the Mortipede, he had a Last Gasp to make sure his walking Millstone survived the clash. Preyer then preceded to give a few lessons on card advantage as a second Consult the Necrosages netted him two cards before he dropped the elbow with a Twisted Justice. Twisted Justice is a bit of an unreliable card. Often there's a bunch of Saprolings out and it does nothing. But when your opponent's only creature is a Bramble Elemental that's five cards and one dead fatty thank you very much.

Chan was something like 9 cards down on his opponent at this point but was still kicking as a Helldozer entered play. Preyer slowed him down with a Transmuted for Peel from Reality. The Helldozer returned and picked up a spare Grifter's Blade lying around.

Preyer tapped 7 mana and brought out Dimir's head honcho, Szadek , Lord of Secrets. All of a sudden Chan's library looked like it needed to be a lot bigger, like Battle of Wits bigger.

Rolling Spoil on Duskmantle and a Last Gasp on an Entrancer took some of the pressure off Chan's library, but Preyer was still able to throw an Infiltator in the way of the Giant Zombie. The Vampire leeched 5 cards away from Chan's library and the Portuguese player had some hope when Preyer had no creature to follow up with. Chan could survive another hit from the Vampire and his Helldozer attack knocked Preyer to 4 life.

Unfortunately Preyer was waiting with an Induce Paranoia that dropped Chan's library to within range. The Helldozer would kill Preyer with another attack but Chan would never survive the next draw step to administer it.

Game 2 and Preyer was scuffling around for mana for a while before his Lore Broker found him a Dimir Aqueduct. A Stinkweed Imp tried to hold off a Carrion Howler before Chan rescued his undead doggy with Gaze of the Gorgon.

It seemed like the Portuguese player had found the rubbish part of his deck. Shred Memory is hardly exciting but it does at least keep Stinky from being a nuisance.

A second threat, Root-kin Ally finally showed up for Chan just as his Howler was leaving courtesy of a transmuted for Last Gasp. Both players traded discard as a Strands of Undeath from Chan was followed by a Consult the Necrosages from Preyer. Unfortunately for Chan, Preyer responded with Peel from Reality and the Root-Kin Ally went to the graveyard via a brief stint return to Chan's hand. 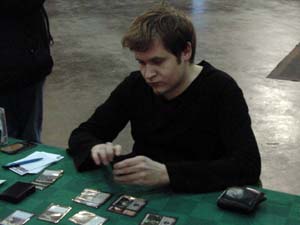 Chan had nothing in hand and nothing in play other than lands, while Preyer had an Entrancer. Chan topped a Strands and dropped in on Preyer's Entrancer just to keep the Austrian's hand down.

Chan scooped on the following turn as Preyer summoned Wizened Snitches to reveal Induce Paranoia on top of his library and a rather unexciting forest on top of Chan's. At this point the Portuguese player was virtually locked. Between the Snitches and the Entrancer Preyer had fairly good control over what his opponent would draw and he had the Induce Paranoia for backup should something slip through.

Information is the key and the Dimir hold all of them.

Thomas Preyer beats Tiago Chan 2-0 and is now alone at the top of the standings.