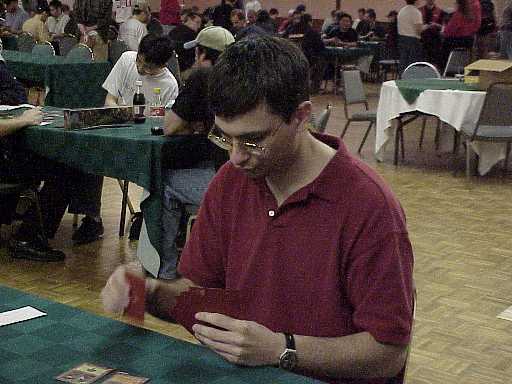 Adam Katz and Gary Krakower both snuck into Day 2 as two of the lucky 5-2 players who got to keep playing. With 1-1 records so far today, they each needed to start winning immediately if they want to make any money this weekend. Katz is famous for his 3rd place finish at Pro Tour L.A. 98, but work commitments have resulted in him falling off the Pro Tour (he's a lawyer from New York City). Krakower is widely regarded as the best player in the game who has never made a Pro Tour Top 8. He's a two-time Canadian National champion and won Grand Prix Austin as well. In the draft, Krakower took several Harrows with very early picks, forcing a 5-color green strategy. Katz wound up with a red/green/white deck including two Power Armors, decent removal, and an Armadillo Cloak. 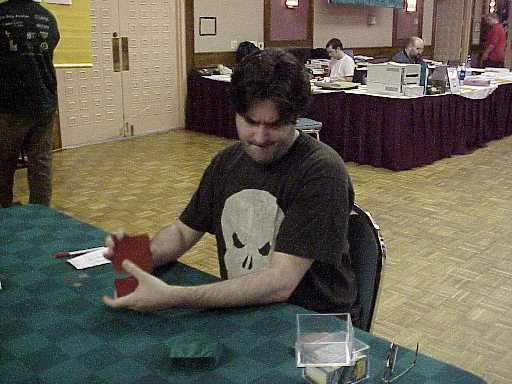 The first spell in game 1 was Katz's turn 4 Ardent Militia with kicker. He played a Skizzik on turn 5, also with kicker. Krakower did have Shackles for the Skizzik, but his hand was full of black cards while his lands could only produce green, white, and red. Those precious Harrows refused to show up. Katz applied some serious pressure by dropping Benalish Trapper and Power Armor. Krakower was able to Dismantle the Armor after Katz used it once, but Katz had a second Power Armor and Krakower never did find black mana for the removal spells in his hand.

"Harrow sucks!" announced Gary Krakower while they were sideboarding. "That's why I take so many so highly... so I can sit here and say 'this sucks'." Game 2 sucked too - Krakower still didn't draw any Harrows but he did draw 13 land and only 6 spells. He almost stabilized when his kicked Thicket Elemental plopped a free Crypt Angel into play, but Katz used Assault plus Zap to remove the Angel while a Trapper shut down the Elemental. Katz never did draw the green mana he needed to cast the three green cards in his hand, but when he drew Power Armor again, he didn't need those green cards.