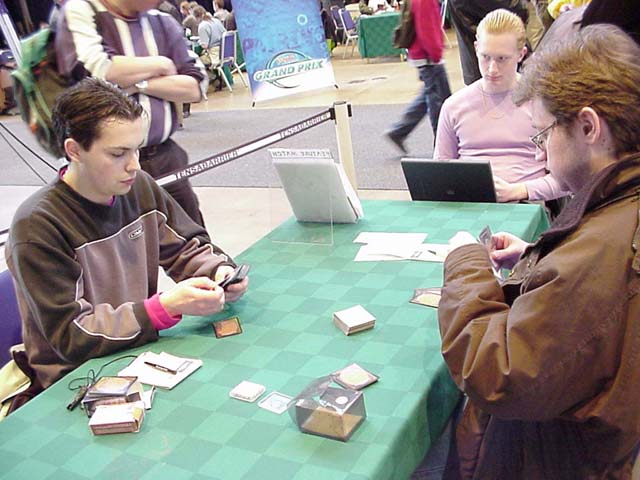 This round ten feature match at Grand Prix Gothenburg saw Alex Shvartsman from New York, USA take on Johan Sadeghpour from Umeå, Sweden. Johan burst onto the Pro Tour scene this past September with a 17th place finish at the team Pro Tour in New York where he teamed up with fellow Swedes Jens Thoren and Erik Olofsson. He followed up that finish with a strong ninth place in LA and is currently second in the rookie of the year race.

Shvartsman on the other hand is probably well known among our readers and is one out of six American players making the trip to Gothenburg.

Both players are currently at 8-1-1 and sporting perfect 2-0 records so far on day two. Johan is running a very aggressive red/green deck with a splash of black while Alex is green/red/white with powerful cards like Rith, the Awakener and Armadillo Cloak, which can be amazing in the G/R versus G/R/W match-up.

The match started out with a minor discussion regarding one of Alex's sleeves. The sleeve was replaced and game one started. Alex, who had won the die roll and elected to play, chose to keep his hand while Johan took a mulligan.

Both players played turn two Nomadic Elves. This however, was followed by some mana trouble as both players missed their turn three land drops. Johan was still able to put on some pressure as he dropped a turn three Rogue Kavu. 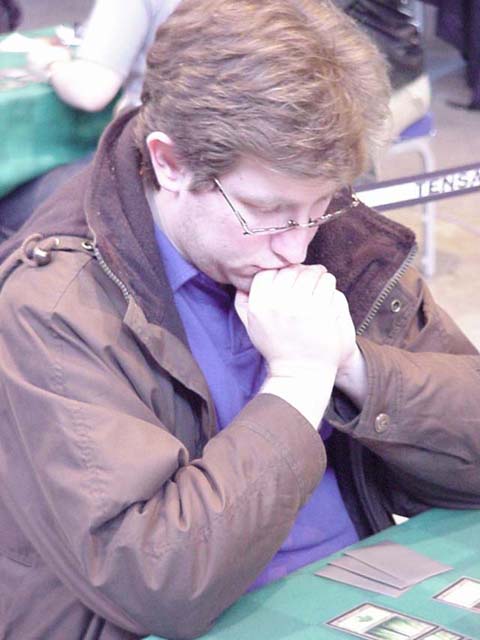 Alex answered with a Glimmering Angel for three mana, thanks to a Thornscape Familiar. During the next couple of turns both players played creatures trying to get some kind of board advantage. A task in which Alex easily succeeded thanks to his five lands and Familiar as opposed to Johan's three lands and lack of Familiar.

Alex then started to attack and Johan chose to triple-block a Verduran Emissary taking six damage in the process. The following turn, Shvartsman once again attacked with everything and after casting a timely Pollen Remedy followed by a Thornscape Battlemage Sadeghpour was left with no creatures on the table. Johan looked over at Alex's beatdown army and scooped up his cards.

Both players keep their hands this time around. Johan gets first blood when casting Scorching Lava on Alex's Nomadic Elf and then coming in for two with a Thornscape Familiar. But the Swede once again misses his third turn land drop. Alex quickly capitalizes on this with a turn three Verduran Emissary and a turn four Thornscape Battlemage. The game now looks pretty much one sided but Johan somehow is able to make a comeback by taking out Shvartsman's Familiar by casting an Aggressive Urge on his lone Kavu Scout. That particular Urge turned out to be a really good one as Johan drew a land off the cards cantrip effect and the Swede was back in the game. 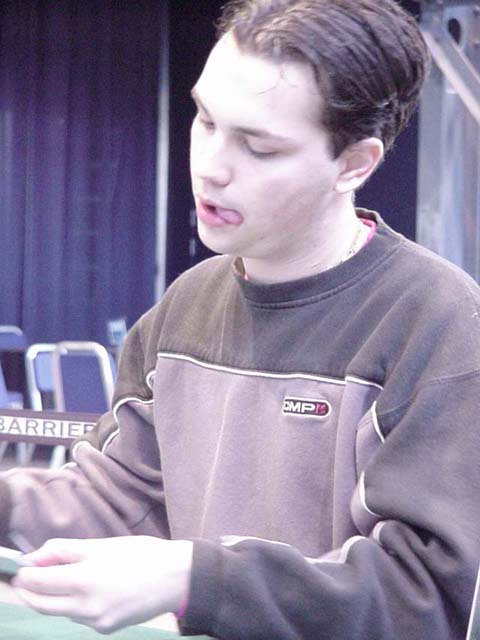 But Alex wasn't sitting back doing nothing. He cloaked up his Verduran Emissary and came over for an eight life swing. Sadeghpour wasn't about to give up yet, though, as he in three consecutive turns played another green familiar, a battery and a kicked Kavu Titan. Meanwhile Alex just drew, played lands and said go. Johan came over twice with his Kavu Titan dropping Shvartsman to 14 lives. At this point it seemed like they were going for a third and deciding game. However this was not to be as the American once again turned things around by dropping Rith, the Awakener. Sadeghpour, now at eight lives, looked at the big dragon in despair as he drew a card, sighed and passed his turn. Alex now came in for six, making eight 1/1 tokens in the process. Sadeghpour drew his card, looked at the board and extended his hand in defeat. I guess this proves that what we learned at last years Pro Tour Chicago can be applied to limited as well - Rith, the Awakener and Armadillo Cloak just wrecks red/green.