The only remaining players on an unbeaten record faced each other in a decimated round ten. Four people had byes, and there were match losses for three more players as they had failed to write down their deck correctly. Jan is a fairly unknown player from Slovakia, whereas more people will recognize the name of Ruel. In Antoine's last six limited Grand Prix he has lost only two matches on the first day of competition, and came second in Cologne.

At least both players had all their colors of mana, so they could have a game. Antoine's Nightscape Familiar was Strafed, and then Tomcani began to play creatures, first a Pouncing Kavu, then a Duskwalker both with kicker. 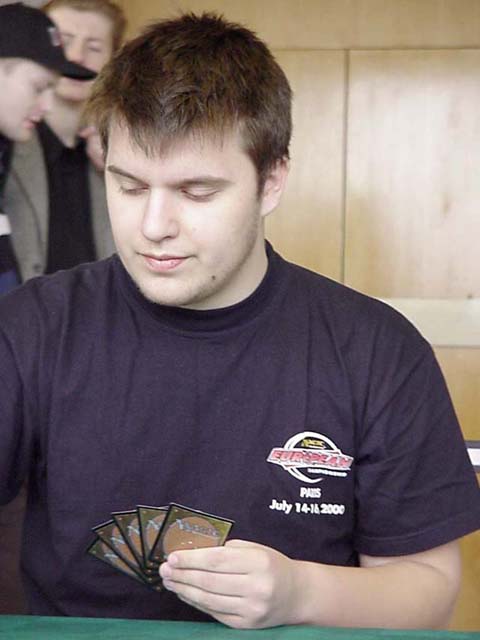 Antoine killed the Kavu and a Lightning Dart in Jan's hand with Void, after first checking that he couldn't kill both creatures with a Void for five. He played two Sea Snidds but these were incapable of blocking Duskwalker. Ruel did have an answer for the 3/3 though, when he drew another land allowing him to cast Soul Burn on it. The Snidds then began to beatdown.

Jan only had a Slinking Serpent as a creature, and didn't draw another one as the Snidds rapidly reduced his life total. When Antoine played a Mire Kavu as well, the Slovak drew a land, and then conceded.

Jan chose to play, and his chances of winning received a boost as the Frenchman was forced to take a mulligan, keeping his six card hand. Despite this Antoine played the first creature, but it was a less than impressive Arctic Merfolk.

It was immediately Gated to play a Cavern Harpy, but Jan had some creatures of his own, a Slinking Serpent and a Morgue Toad. Antoine paid four mana to untap his Cavern Harpy by using the Arctic Merfolk' s Gating to return it to his hand.

Jan tried to give it Mourning, and Antoine paid a life to immediately return it to his hand, the Toad and Serpent then hit for four bringing Ruel to fifteen. Antoine could not deal with them immediately so he cast Probe with kicker, so he went down to eleven life.

Jan had nothing else to do - his cards in hand were Tribal Flames, and Vodalian Serpent which he then had to discard when Ruel played Thunderscape Battlemage with kicker. Nevertheless Antoine was still in trouble - he could not deal a Pouncing Kavu that Jan drew - even though Jan had to sacrifice his Morgue Toad to pay it's kicker due to not having a second Mountain out. 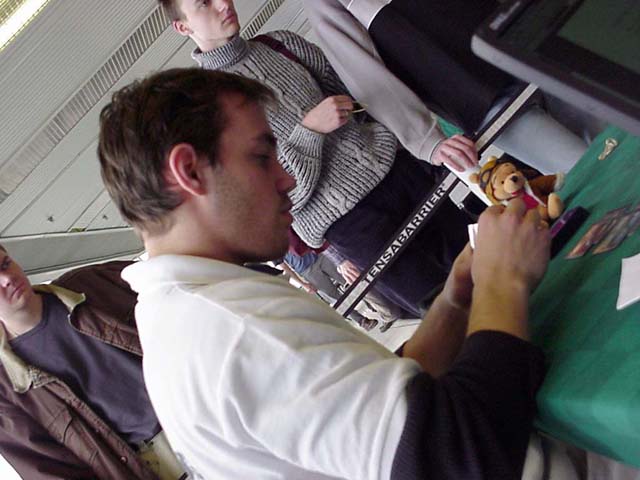 Antoine didn't have a way to stop the 3/3 First Striker, his creature selection of Arctic Merfolk, 2/2 Battlemage, and Sea Snidd could not kill it, and while Ruel drew lands, Jan, who had only five land in play, drew Duskwalker and then Sea Snidd to tilt the creature battle even further in his favor.

Antoine still couldn't draw any removal, just another land and replay the Cavern Harpy, and the Pouncing Kavu killed him in short order.

Antoine went first but he had to take a mulligan and kept his six card hand. Jan played the first few creatures, his Stormscape Familiar was killed by Cursed Flesh, but his Shoreline Raider survived to hit twice.

Antoine played a Mire Kavu, which couldn't block the Shoreline Raider due to it's protection ability, so Ruel returned it to his hand with Arctic Merfolk that traded with the Raider.

Despite his mulligan, Antoine seemed to be doing reasonably well - he played Shivan Zombie and Cavern Harpy, and Jan - who had exactly the right amount of lands in the second game - drew land after land and played nothing. Meanwhile Jan didn't manage to cast anything for a few turns, taking a couple of hits from the Harpy.

Eventually he managed to get out a Vodalian Serpent, Antoine attempted to Agonizing demise it with kicker, but the Slovak was ready to Recoil it to his hand, which forced him to discard Cauldron Dance.

Antoine attacked again with his Cavern Harpy, bringing Jan to fourteen. Jan once again played his Vodalian Serpent, but Antoine forced him to discard all his cards in hand by casting Thunderscape Battlemage with kicker, and then cast Mire Kavu. Even with no cards in hand Tomcani wasn't finished - he top-decked Pouncing Kavu, and attacked with the Kavu and Serpent. Antoine wasn't fazed, he double-blocked the Vodalian Serpent to kill it, and then Tribal Flames on the Kavu.

Two more hits from Cavern Harpy and the Slovak was down to within Soul Burn range, which Ruel cast for six damage.