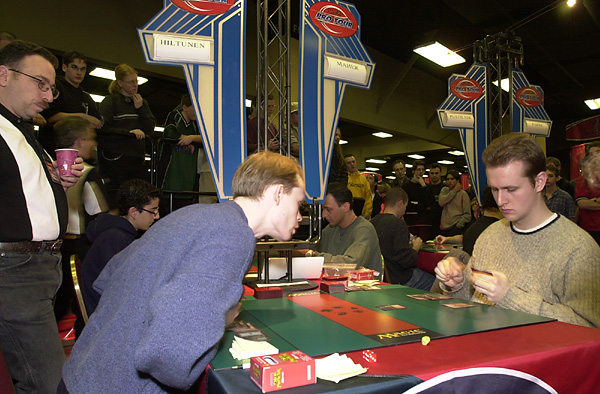 "You seem to have done pretty well for yourself," says Arto Hiltunen as he sits across from Bob Maher Jr. That certainly doesn't put too fine a point on it. After winning last year's Pro Tour-Chicago, Maher finished second at Worlds. Hiltunen's career is also going well, having been crowned Finnish National Champion multiple times, as well as putting in strong finishes at the European Championships and Grand Prix: Sydney. The two have played each other on a number of occasions, but joke that it was before they really "got good."

In game one, Maher's turn-three Airship was countered, and Hiltunen Opted into an Absorb for Maher's second a turn later. Hiltunen tapped out for Blinding Angel, and Maher matched it with Troublesome Spirit. Hiltunen played a second Angel, while Maher cast Parallax Tide, denying Hiltunen his three Islands. The Angels swung, stealing an attack phase from Maher. Maher cast Wash Out, and the Tide made the Angels stay at home, at least for a while.

Maher then cast Chimeric Idol, and Hiltunen Wrathed away the Spirit, trying to save himself some damage. When Maher made a second Idol, Hiltunen searched desperately for a counter with Opt and Accumulated Knowledge, but found none. Without artifact removal for the Idols, he was forced to cast an Angel to block, but Maher's hand was full of bounce, and he kept the Angel off the board for two turns and the win.

Early in game two, Maher had out two Ports and an Ankh of Mishra playing havoc with Hiltunen's mana. In response to Maher porting his land, Hiltunen cast Fact or Fiction. The cards fell down: Tsabo's Web, Wrath of God, Blinding Angel, Coastal Tower, Island. Maher put the Web with the Wrath, and Hiltunen happily took the two.

Maher tapped four, but it was Troublesome Spirit, not Parallax Tide. Hiltunen locked Maher's Ports with the Web and Disenchanted his Ankh. Maher used Mana Short to clear the way for his Rishadan Airship and Spiketail Hatchling, but Hiltunen had Rout back to reset the board.

Maher made a Rootwater Thief, and stole a few cards from Hiltunen's library. Hiltunen brought out Mageta the Lion, and filled his hand with Fact or Fiction. Maher's next threats were countered and wrathed, and when Hiltunen had a counter for his last Idol, Maher conceded.

Both players sideboarded with lightning speed, keenly feeling the pressure of the clock. Fifteen minutes remained to finish the match. Four turns passed in an instant. Maher showed Rath's Edge, and Hiltunen cast Fact or Fiction at end of turn. The cards were Island, Story Circle, Absorb, Last Breath, and Opt, and Hiltunen ended up getting Island, Absorb and Last Breath. Maher Mana Shorted Hiltunen on his upkeep, but Hiltunen played his Absorb, as well as a Tsabo's Web.

Maher played a Tangle Wire. It wasn't as effective as it could have been, because of the web. Maher was unable to take advantage of the stall provided. Another Fact or Fiction from Hiltunen revealed Absorb, Dominate, Coastal Tower, Story Circle and Dismantling Blow. Hiltunen got Absorb and Dominate. He had a Blow in hand for Maher's next play of Chimeric Idol and played a Blinding Angel. Maher Washed it Out.

With six minutes remaining Hiltunen got a Mageta on the board, and filled his hand with Fact or Fiction. He recast the Angel and spent two counters on Wash Out and Troublesome Spirit, attacking Maher to nine. Maher Mana Shorted Hiltunen, who countered it, despite not having another for Maher's Wash Out. As he rebuilt his offence, Maher made another Spirit. Hiltunen used his Dominate to clear out the blocker and hit Maher to one. Maher cast another Spirit and a Hatchling, but Mageta just sent them to his graveyard, causing him to extend the hand.