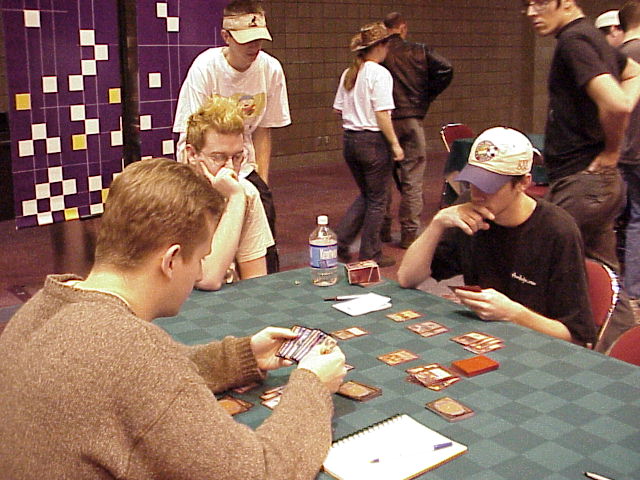 Pro Tour Player of the Year Bob Maher and Mike Hron are staying in the same hotel room this weekend and they draft against each other every week. However, they played for more than just bragging rights in a Round 10 Feature Match that would determine who got to draft at a top table, and who would have their back to the wall as Grand Prix New Orleans entered the stretch run. "Hron" may not be a household name amongst Pro Tour fans, but he has several good finishes on his resume: he finished 9th at Pro Tour New York 5 with and he made the Top 8 of Grand Prix Seattle (with Squee-bind). Maher drafted a blue/white deck with a touch of black for Agonizing Demise. His basic plan was to block up the ground and win with fliers. Hron drafted a red/black deck with just enough blue for Crosis and a Repulse. 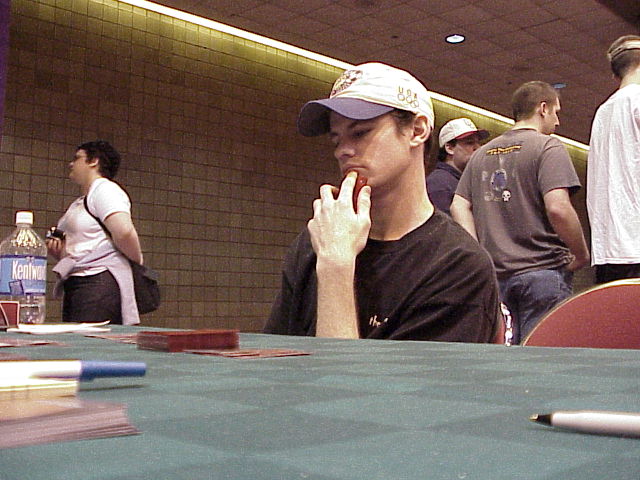 Hron led with turn 2 Rage Weaver in game 1 but Maher immediately Shackled it. Not much else happened until turn 5 when Maher played Probe with the kicker. Hron discarded two land, said "thanks", and then untapped and played Hypnotic Cloud with kicker. Maher lost Vodalian Serpent and Shoreline Raider. Maher didn't actually need those creatures, though, because Hron continued to draw land - a total of 12 land in his first 16 cards. Hron tired racing with one Cinder Shade, but Maher had too many creatures and soon took a 1-0 lead.

It was Maher's turn to have mana problems in game 2. He didn't draw an Island until turn 5 and even then his two Faerie Squadrons were fairly ineffective since Hron had a pair of Mournings. Those Mournings made it so that Maher couldn't even block Rogue Kavu effectively, much less Ancient Kavu. Hron used Plague Spores to remove a kicked Vodalian Serpent - Maher's only real blocker - and the match was even shortly thereafter. 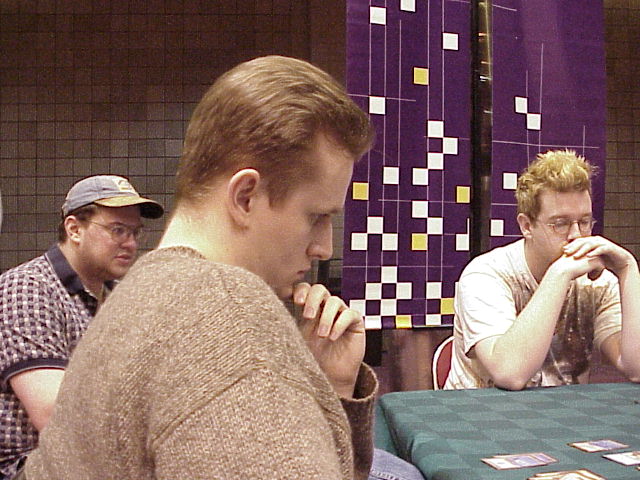 Maher mulliganed away a 1-land draw in game 3, but then came out strong with the protection from red Galina's Knight. Hron sacrificed his Cinder Shade to remove a Samite Archer. Maher looked like he was in good shape with Glimmering Angel and a kicked Faerie Squadron, but then Hron dropped Crosis. Hron chose not to attack with the big dragon because he didn't want to get it Shackled (Maher's Shackles was pinning down an Ancient Kavu) and he needed the dragon on defense. Eventually, though, Hron felt he had to go for it. He got in one hit with the dragon and thought he could finish with ground creatures. However, Wings of Hope on the Glimmering Angel shut his attack down and Restrain bought Maher the turn he needed to comfortably win the race in the air.