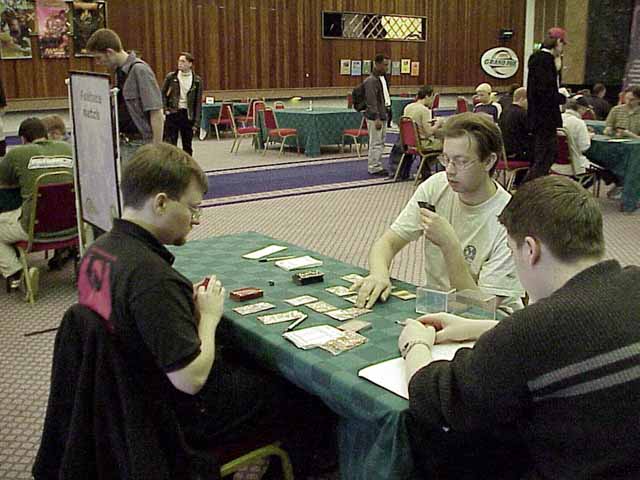 Bram is one of the top dutch players who has 2 GP top 8s to his credit - Amsterdam 99 and Cannes 00. Rob is a member of the famous Your Move Games-Team and won the team Pro Tour in Washington with his teammates Darwin Kastle and Dave Humpheries. He also made top 8 at PT-NY 99. Bram went into this round with a 6-3 record while Rob was at 7-1-1.

Both players were using 3-colored-decks and so they preferred to draw first - at least in this match-up of 2 multi-colored decks. Bram won the toss and so Rob had to play. After Rob zapped Brams Quirion Elf, the dutchman was a little mana-short and had problems to deal with 2 Phyrexian Reavers. He dropped down to 2 before all creatures on the board were gone. Rob proceeded to draw into a Pouncing Kavu and won the first game.

Bram decided to draw again and had to mulligan. Rob decided to go for it and dropped turn 1 Faerie Squadron without kicker. Unfortunately the gamble did not pay off as Bram dropped turn 2 Utopia Tree and got a great curve. When he dropped an Obsidian Acolyte turn 6, Rob was forced to scoop up his cards.

Rob decided to draw as well as Bram`s deck was kinda slow in the first two duels. In this game Bram got off to a quite fast start with turn 2 Nomadic Elf, turn 3 Pincer Spider, turn 4 Master Decoy and turn 5 Voracious Cobra while all that Rob could muster was a turn 3 Vicious Kavu and a turn 5 Soul Bourn. On his 7th turn Bram attacked and used an Explosive Growth on his Nomadic Elf to deal the last 5 points of damage and took game 3 and the match.