Carlos Huarapil is one of the many ratings-flagged players to make day two, but you wouldn't guess it from his performance this weekend. Going into Round 10, he is the only undefeated player. He squares off against American David Williams, hot off his 20th-place finish in Los Angeles.

The pace of the first game favored Williams. He had a pair of early Samite Pilgrims and a Hobble for Huarapil's Mire Kavu. Huarapil Probed with kicker off four lands and a Nightscape Familiar. Williams discarded Island and Wash Out. Huarapil dropped two lands.

Williams began his offense with a Glimmering Angel. Huarapil matched him with Urborg Drake. Unfortunately for him, Williams had a kicked Squadron waiting in the wings to devour it. Huarapil had no removal to stop him.

Facing five points in the air, Huarapil needed to put on pressure of his own. He made a Trench Wurm and Metathran Zombie, and then a kicked Vodalian Serpent. He lost the Zombie in combat, pushing through three more damage. Williams continued his air assault, and after taking a hit from the Serpent, the life totals stood Williams - 11, Huarapil - 9.

Huarapil Clouded away Williams hand. It caught a Rout, but that hardly seemed to matter. Williams had ample chump blockers for the Serpent, and two attacks later the game was his.

Huarapil seemed disheartened at his loss, saying "Ah, I'm a scrub.", to which Williams replied "You're no scrub! You're 9-0!" 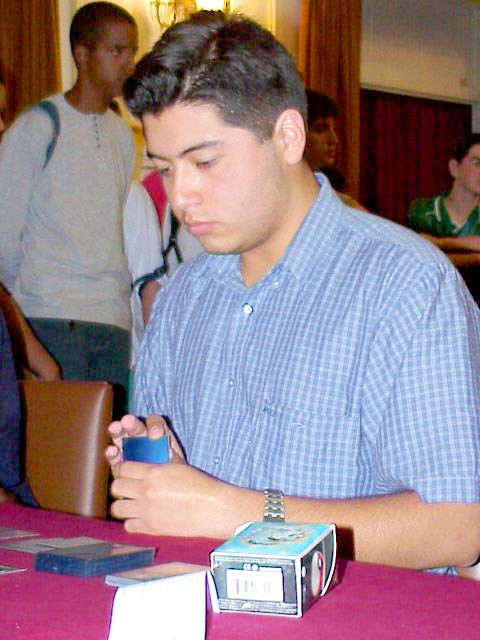 Huarapil punished this play with a Smoldering Tar, removing the blocker and knocking Williams to 9. He added a Metathran Zombie to his force.

Now Williams wasn't in a position to race. With his opponent holding two cards, he couldn't risk a removal spell dismantling his defense. Instead, he Washed Out the Kavu and played a Samite Pilgrim, keeping all his creatures back.

Huarapil attacked with his Trench Wurm. Williams double-blocked with his Golem and Griffin, choosing to lose the Griffin. Huarapil replaced his creature with a Mire Kavu. Williams' attempted Aurora Griffin was Excluded. He successfully played Obsidian Acolyte.

Huarapil sent in the Mire Kavu and Williams blocked with the Golem and Acolyte. When Huarapil assigned damage he made an error. He touched both blockers, saying "Two" at each, but intended to do three to the Golem and one to the Acolyte. A judge was called over to investigate. At first, it was thought that the mistake was brought on by the language barrier, that Williams had misunderstood what Huarapil said, but it became apparent that Huarapil merely didn't say what he was thinking. After it was sorted out, Williams protected the Golem with the Pilgrim, the Acolyte and Kavu went to the graveyard, and Huarapil used Singe to remove the Pilgrim.

This left the board full of lands and only two creatures: Williams' Golem and Huarapil's Metathran Zombie. Williams enchanted his dude with Wings of Hope and started the race. The players traded hits twice, with Huarapil quickly falling behind. Neither player added to their force.

Soon, Huarapil was at two, staring at three points of incoming damage. He flipped over his hand: six lands.