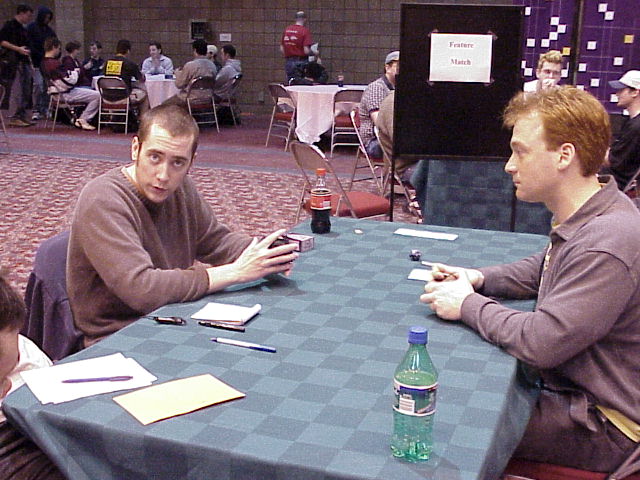 David Price, the King of Beatdown, is playing a deck that is popular amongst the pro tour regulars - a black and blue, tempo control deck. Small creatures plus tricks tend to win you games, is the focus. His deck follows that theme, though the draft didn't go as well for him as he would have hoped, and he is running some substandard cards for their cantrip effects. Kesselman's draft went very well - he's playing red, white and green, with the green mostly being for Restock and four Armadillo Cloaks. He has a couple of fliers, including Glimmering Angel, that he can Cloak up and take over a game with. 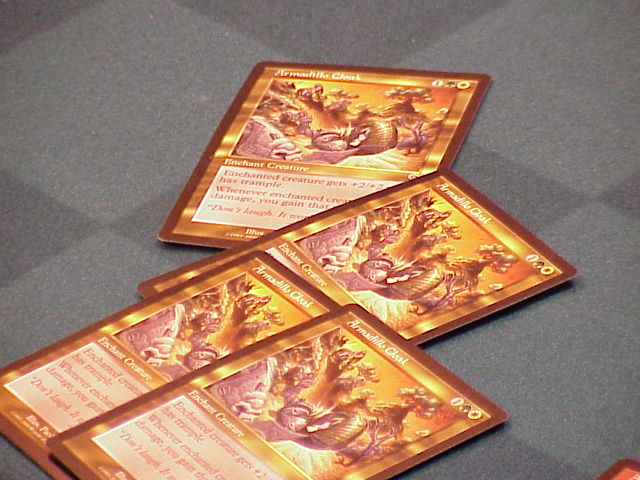 Price started things off with a second turn Vodalian Zombie that he cast despite only having islands on the table. He used a Chromatic Sphere (a card that Randy Buehler believes should have been called Chromatic Sextant) to generate black mana and to draw himself a card. Over the next three turns, Kesselman played a Benalish Lancer (no kicker), a Ancient Kavu (no kicker), and a Glimmering Angel (no kicker). The Lancer ran headfirst into the Vodalian Zombie, and found itself confused by a Sway of Illusion and turned green. Price was still taking heavy beats despite his trickery, and a Metathran Zombie that he couldn't regenerate due to his lack of swamps wasn't helping him much. Kesselman topdecked a forest and played an Armadillo Cloak on the Glimmering Angel, and was able to protect it with his Coastal Tower. The Angel went the distance, and the game was over shortly. Price's deck mocked him on his last turn with his final draw phase - the swamp he had needed five turns earlier. 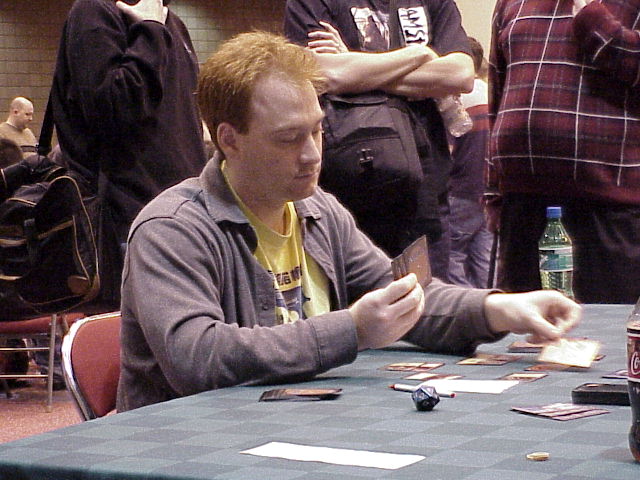 In between the games, I asked Dave about the Sway of Illusion. He thinks the card is excellent, and Kesselman said that is was great, since it combos in some way with just about every card in Invasion. In Price's previous round, during his attack phase, right before damage was assigned, he had used Sway of Illusion to turn all of his opponent's creatures black, which was effective since Price had a Urborg Shambler in play. This immediately killed his opponent's Rage Weaver and turned blocks that were trades into blocks that were amazing for David. 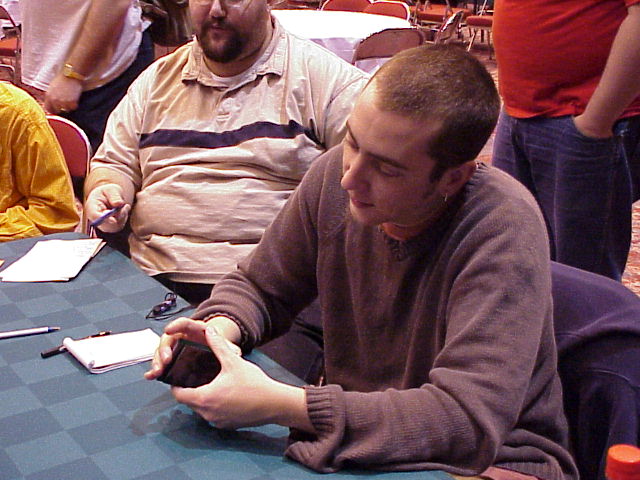 David's deck mocked him again on his opening draw - he had 4 islands, Sway of Illusion, Manipulate Fate and Worldly Counsel. His first draw was a swamp, allowing him to Worldly Counsel for two cards at the end of Kesselman's second turn, netting him a Rainbow Crow. He Manipulated three land out of his deck on his turn three, but that didn't stop him from drawing a land off the cantrip effect. On his turn four, Price played a Rainbow Crow that didn't live past the end of the turn, burning in some Scorching Lava. Kesselman had a Llanowar Knight that was serving up the beats, and on turn four played an Ancient Kavu, and on turn 5 played a Kavu Climber. Price tried to stop the insanity with a Metathran Zombie that he armed with some Scavenged Weaponry, but it too met a fiery end from Scorching Lava. There was nothing David could do to keep himself in the game, and so on Eric's next attack phase, he dropped below 0 life and congratulated Eric on his win. After the match, Kesselman spread out his deck, and it really looked like that even if Price had drawn better, he probably still would have been out of the running.