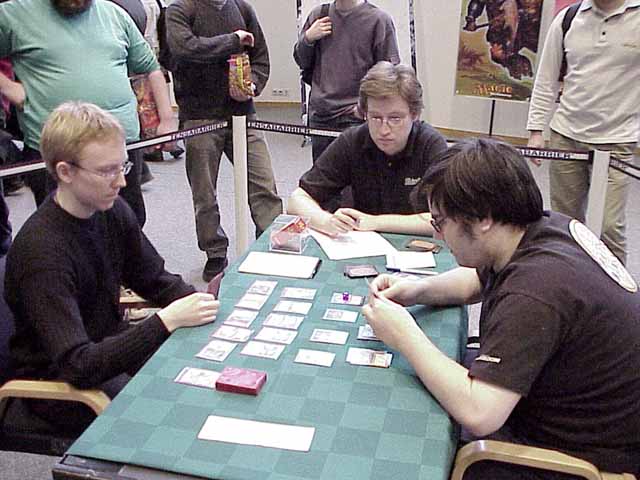 One of the top local players in the tournament, Ekebom finished in the top 8 of Pro Tour Los Angeles last season. He is defending against one of the only four US players to attend this tournament, Zvi Mowshowitz.

Before the beginning of the round, Ekebom offered Mowshowitz an intentional draw. Ekebom's deck was not very good and he felt taking a draw against a stronger deck this early was a worthwhile gamble. This is Rochester draft though, and Zvi was probably aware of Ekebom's deck. In either case, he immediately declined.

Mowshowitz was off to a great start in game one. He played a first turn Stormscape Apprentice and a second turn Benalish Trapper - bad news for Ekebom's blue-green-white deck that had no way to actually remove them.

Ekebom was on the offensive. He played a few 2/2 creatures early on. Mowshowitz only had one Plains so he enchanted one of the tappers with Wings of Glory to stop the offense. Ekebom cast Angelic Shield and used its ability to bounce the enchanted creature, attacking for more damage.

Zvi was really beginning to feel the crunch, but things changed drastically when he cast a turn 5 Duskwalker with kicker and a turn 6 Dromar the Banisher.

Ekebom was holding Shackles and cast a pair of Razorfoot Griffins himself. For some reason, he chose not to block the dragon though, and Mowshowitz used its ability to return all white creatures. Although this sent his Dragon and a Benalish Trapper back home, it also bounced five of his opponent's creatures. It also made Shackles a lot less useful, forcing Ekebom to enchant a Duskwalker with it. A turn later Mowshowitz tapped all the potential blockers and won the game by attacking with the dragon.

In the second game Mowshowitz' draw was very slow, but Ekebom's lightning fast. He played Galina's Knight, Llanowar Knight and Glimmering Angel while Mowshowitz was stuck at three mana. In a desperate attempt to buy time, Zvi played out a pair of Duskwalkers without kicker. Ekebom cast Strength of Unity on his Glimmering Angel and dealt more damage.

Mowshowitz was able to remove the enchantment with Dismantling Blow on the following turn, but could not stop the horde of attackers without more mana in play. He conceded when Ekebom added a Faerie Squadron to his team.

Ekebom repeated his offer of an intentional draw, but it was refused once again.

In the final game Zvi opened with Hate Weaver but had no other early plays at all, while Ekebom cast Llanowar Knight and Razortooth Griffin and went on to attack for two damage every turn.

Mowshowitz got to five mana, but he did not draw a second Swamp and so could not cast any of his spells such as Duskwalker. Ekebom sealed his victory when he cast a Benalish Emissary, destroying Zvi's only swamp and adding another creature to his force. Mowshowitz played a very large Serpent but it was sent back to his hand with Angelic Shield and Ekebom attacked for the game