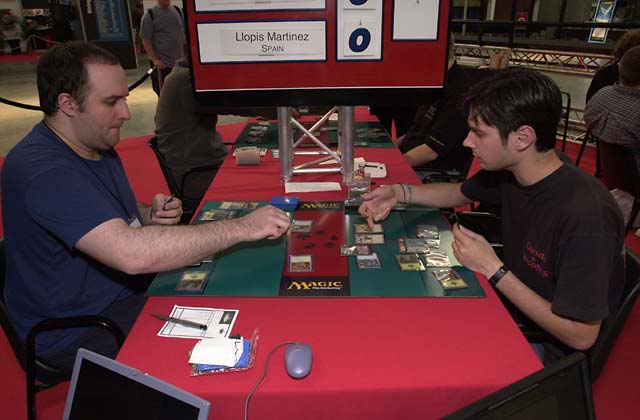 Gary Wise admits his draft deck is one of the worst. You can probably tell, having seen him play four basic land types played on the first four turns (all but the Mountain). He then casts a power 4-drop - a Rampant Elephant, following it with another power 4-drop, a Strength of Unity. With four basic land types in play, that makes the Elephant pretty good - for all of ten seconds, until Llopis uses Rushing River to send the unfortunate creature back to Gary's hand.

Wise used an Agonizing Demise to take out a kicked Vodalian Serpent on the following turn, so he could continue attacking. Llopis took a bit of damage, but was able to stabilize very soon, casting a Sunscape Familiar and a Glimmering Angel.

Wise attacked with all, activating the Elephant's ability to try and make Glimmering Angel block it - but Llopis had a trick. He used Treva's Charm to remove the Elephant from the game, and used his Angel to block the 1/1 Acolyte. Wise had a trick this time around, using up Gaea's Might to take out the 2/2 flyer.

Both players drew land for several turns. In the meantime, Tower Drake was doing its job, reducing Wise's life total relentlessly. He was down to two life by the time he was able to cast, and bring online a Thornscape Apprentice. With Galina's Knight joining the Spaniard's team, Wise was on the defense, but at least not taking damage anymore.

Llopis drew a Steel-Leaf Paladin, and played it for five, gating a Sunscape Familiar. Llopis himself was down to eight life, and Wise was holding an Explosive Growth in hand, but would he get an opportunity to sneak in an attack?

Wise chump-blocked the Paladin with Obsidian Acolyte. His tapper was now Shackled, releasing the Battlemage.

Wise attacked with all three of his creatures, hoping that Llopis would somehow choose not to block two of them, but Llopis did not mind trading off a Galina's Knight, only letting two points of damage through.

Wise was holding a Magma Burst and an Explosive Growth - but he never drew a source of red mana to cast the Burst, and Growth would leave him one point short of victory. Game one to Llopis.

Wise elected to play in the second game. His mana draw featured two Plains as the only land and a Harrow. He decided to keep the draw, as it would become very good if he managed to find a Forest relatively soon.

The gamble did not pay off right away. He drew an Island, then missed a land drop, then finally drew his Forest. Llopis did not capitalize on this. He was holding an Exclude and a Prohibit, so was reluctant to tap out.

Wise got a Quirion Elf into play, and then attempted to cast Thornscape Familiar and a Mirrorwood Treefolk, only to have both of them countered. With no more counters in hand, Llopis felt free to cast his large creatures at this point. His hand consisted of two Steel-Leaf Paladins and a Vodalian Serpent. He had a Rushing River and Pollen Remedy to back it up. None of those cards could deal with Wise's next play.

Wise cast a Stormscape Battlemage with two kickers, targeting the Serpent. On its own, that play would not be overly problematic - but Wise had a Sunscape Apprentice in play, which meant he could do this every single turn from now on. 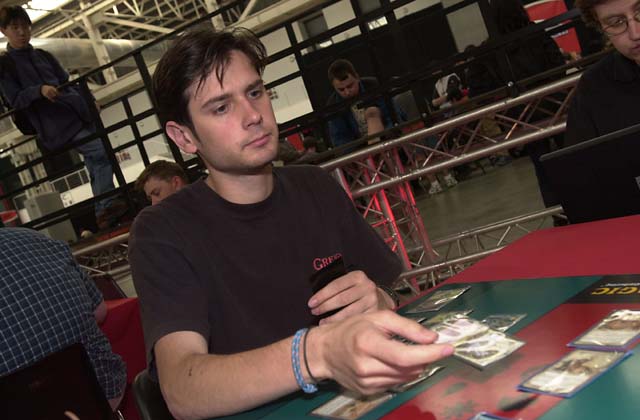 Llopis delayed the inevitable by casting Rushing River with kicker to save his Serpent and send the Apprentice back to Wise's hand. He eventually dealt with the problem by catching the Apprentice tapped, and Shackling it. Wise got some satisfaction out of sacrificing it to pay kicker for Falling Timber.

The game lasted a while long, with Llopis stabilizing at ten life, having summoned a pair of Paladins. Wise summoned a large bad creature of his own - a Stratadon! Eventually, Wise was able to use Rampant Elephant's ability to make both Paladins block it, get eight points of creature damage through, and kill Llopis with a Magma Burst.

'I based my decision not to mulligan on his (Llopis's) deck," Wise explained. "I thought I'd have the time to draw a Forest." In the end, the gambit worked out.

Wise started game three exactly the same as he started game one - except that his four land types in play included a Mountain this time. Llopis did not have a counter for Rampant Elephant, so he blocked it with Sea Snidd, getting a Gaea's Might out of Wise's hand. Wise then cast his Sunscape Apprentice.

Up to six mana, Llopis was able to play one of two Vodalian Serpents in his hand, but he also drew a Prohibit by now, and wanted to keep some mana untapped for it. In the end, casting a large monster won out.

Llopis did not block an Elephant for fear of a Giant Growth effect, and wise summoned his Stratadon. Llopis then cast a Sunscape Familiar and passed the turn.

Wise attempted to cloak up the Stratadon, but it was Prohibited. Llopis also used Pollen Remedy to save Vodalian Serpent after it blocked a Growthed Stratadon.

Llopis used Shackles to keep Stratadon tapped, and began racing with his Vodalian Serpent. Wise summoned Benalish Heralds - great for a long-term plan, but he might not have the turns he would need. Llopis cast a second Serpent with kicker! 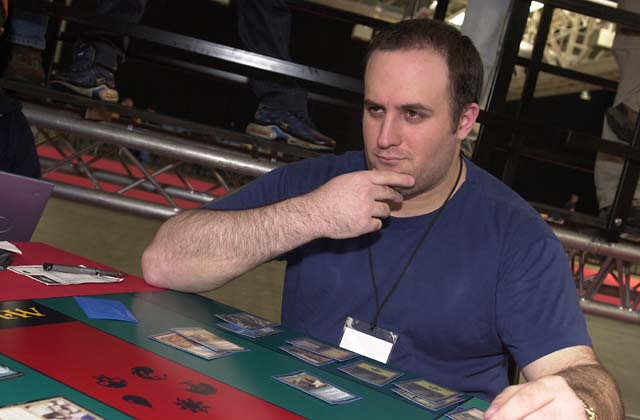 Trying to find answers, Wise used the Heralds ability main phase, and played a couple of small creatures. He then used one of them to block the Serpent, going down to two life. Llopis nonchalantly summoned a Voice of All naming black.

The correct play was to name white - since Wise could have simply attacked with Rampant Elephant and forced the Voice to block it. However, Wise did not see that play. He used the Herald's ability on the last turn to topdeck the right card - Agonizing Demise. He showed it to Llopis as he conceded. Llopis pointed out the mistake, but having checked the top few cards of his library, he realized that he could not have won anyway - the upcoming cards were land.