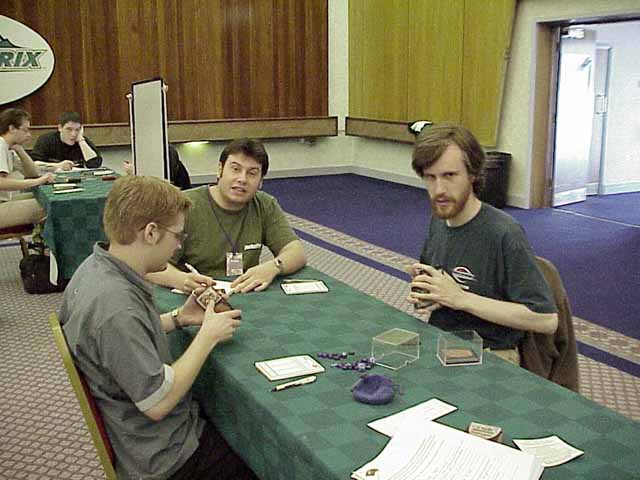 John Ormerod is the UK's top limited player, and has posted some excellent pro level results, including 6th at PT Mainz, 9th at PTNY Team event, as well as 9th at the extended PT Chicago 2000. Tom Harle is last years English national champion, and made top 8 again this year before losing in the quarter finals. Tom is playing an aggressive 5cG deck, while John O is playing a Black / Blue control deck, with massive card advantage potential.

John won the dice roll and elected to go first, both players kept their opening hands. Tom opened the quicker of the 2, with a second turn Nomadic Elf, third turn Obsidian Acolyte and a 5th turn Angel of Mercy. Amidst this he also Harrowed for extra white mana to use with his Acolyte. John O had cast Mourning on the Grizzly Bear, but had to Reclaim it once the Acolyte resolved. His defense developed with a kickered Urborg skeleton and a Shoreline Raider, but the Acolyte made the black creatures and removal academic, and a few turns later Tom beat John and his many lands to death. Game 1 was all about the Acolyte.

John elected to begin again, and Tom mulliganed his openening hand, staying with his second hand which contained more land than spells. Both players got rather slow starts though, and in addition, John was colour screwed - he played swamps during the first five turns. Tom, on the other hand, didn't have any colour problems, so he got to play the first spell; a Benalish Heralds.

Fortunately, John had a Treva's Attendant that he could play, while Tom cast a Treefolk Healer. During his next turn, John finally drew an island, and he promptly cast Probe with kicker. Tom didn't have to discard any vital cards though, just two Plains.

Lacking blue mana, Tom attacked with the Benalish Heralds, and when John blocked it with the Attendant, Tom used an Explosive Growth to kill the blocker. Tom then cast a Sunscape Apprentice.

John, clearly on the defensive, Recoiled the Heralds when Tom attacked again. He then played a Metathran Zombie, and when the Heralds tried to enter play for the second time, they were Excluded. John then cast another Probe with kicker, taking more land from Tom's hand.

Tom played the last card in his hand, a Nomadic Elf, which gave John a perfect opportunity to get rid of the Treefolk Healer with a Recoil. John then Recovered his Treva's Attendant and cast it, this time turning it into a very scary creature by enchanting it with Traveler's Cloak and Scavenged Weaponry. Tom drew a Serpentine Kavu though, and also a Rampant Elephant, but a Squad of Faeries entered play on John's side of the table and a third Probe let John search for more good cards.

Tom was able to use the lure ability of the Elephant to kill both John's regenerators, and he also cast Saproling Symbiosis for four. But he was unable to stop the plainswalking Treva's Attendant and the Faeries, and they went all the way.

Tom went first in the final game, but John got out the first creature, a turn three Shoreline Raider. It was met by a Rampant Elephant, and Tom then Harrowed away a forest to accelerate and optimise his mana.

Tom then cast mourning on the Pro Kavu guy, and forced it to block the Elephant, but John recoiled the mourning and the pair traded creatures. John then recovered the Pro Kavu guy and put him back on the table, followed next turn by Treva's attendants. Tom made a Serpentine Kavu, and after cursing the Raider attacked to put John on 12 life. John slowed the beats with a Vodalian serpent with Kicker, and next turn Treva gained forest walk thanks to the Travellers Cloak. He kept control of Tom's hand with a Probe with Kicker, and made a Faerie Squadron also with kicker. Tom needed to top deck an answer and did, shackling Treva's attendants. John O also proved he could draw cards and showed Tom a repulse, at which point Tom conceded.