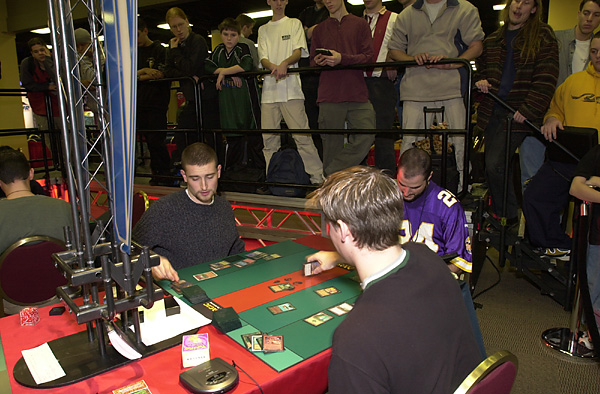 Brian Kibler won the Grand Prix in Toronto three years ago before taking a two-year hiatus from Magic to wrestle. (Americans are so violent!) He picked the game pack up at last year's Pro Tour LA and has been consolidating his game ever since.

At first glance, this appeared to be a typical red-green mirror match. But appearances can be deceiving.

Brian won the roll and played first. Both gentlemen kept their initial hands. The opening pace was rather fast and furious, with a second turn Chimeric Idol for Brian meeting up with a third turn Blastoderm for Jon... which in turn met up with a fourth turn Blastoderm for Brian. And those are the creatures that didn't really impact the game.

A mid-game Ancient Hydra from Mr. Finkel was unable to hold off pressure from Brian's Jade Leech, River Boa, and Chimeric Idol. However, a Kavu Chameleon worked a whole lot better. 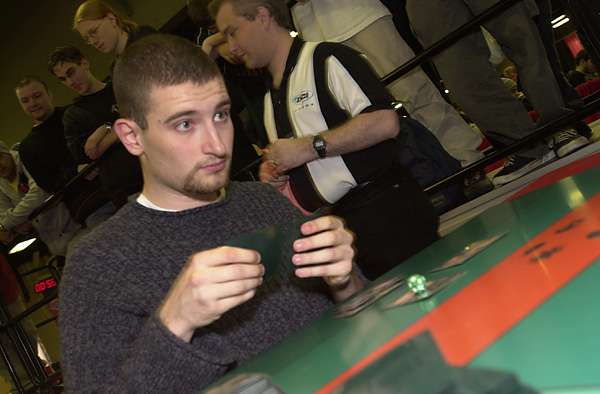 And then Brian's own Ancient Hydra showed up. The next turn, with fading on the stack, Brian riddled the Chameleon with holes and nailed a poor Llanowar Elf to boot, letting the Hydra fade out immediately and clearing the way for a full ground assault. Jon put up a Chimeric Idol, but with Brian responding with another Jade Leech, Jon conceded after his next draw step.

Jon elected to go first, and kept his hand. Brian mulliganed once and came out in quick control, casting two Simoons in the first four turns to pick off Jon's early River Boas. Jon played a turn six Blastoderm that looked a little less impressive after Brian played Rith, the Awakener. Brian let the Blastoderm swing through - a wise choice, since an Ancient Hydra came out to play immediately after combat. Brian simply waited until his turn and then, like all conventional pro players, enchanted Rith, the Awakener with an Armadillo Cloak and came across for eight. (He chose not to generate saprolings. This reporter was deeply disappointed.)

After assessing his options for a turn, Jon conceded, taking his first match loss of Pro Tour Chicago. 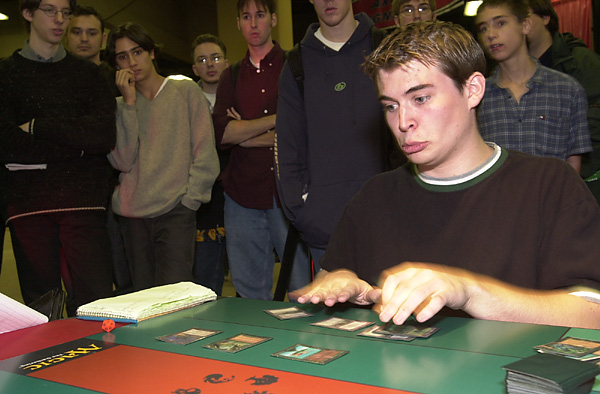 Those looking for metagame insights may be interested to know that both players were running Rith. Brian sided in the Armadillo Cloaks (they replaced Chimeric Idols). Jon also had white cards such as Aura Mutation and Wax/Wane in his deck. No Fires of Yavimaya were played this match; Brian was not even running them.

For all of this reporter's expectations of writing for his first Pro Tour, he never imagined that he would be able to write the sentence, "Brian Kibler came over with an Armadillo Cloaked Rith to smack Jon Finkel and force him to concede." Anyone who says Standard is stale has his or her eyeballs in the wrong sockets.