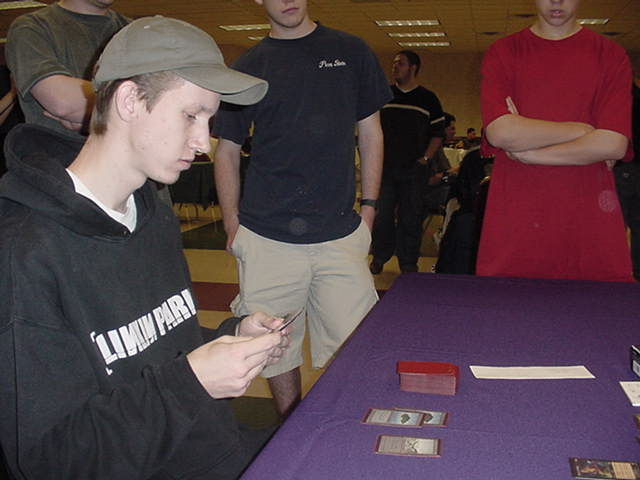 At the top table in Round 10 sat the last two 9-0 competitors: Justin Bing, 22, and Ken Bearl, 23. Both are from Minnesota and have played each other before on the PTQ circuit, with Justin usually winning. Justin is an amateur that came into the tournament with 3 byes; he won a trial in Madison. Ken has a few Pro Points to his name; he played in PT London, PT New Orleans, and made the Top 16 at GP Minneapolis. At Minneapolis, Bearl was the last undefeated player at the beginning of Day 2, and he's hoping to duplicate that feat here.

Both players are running Psychatog decks, but Bing's eschews Upheaval, opting instead for maindeck Chainer's Edicts and Recoils. Bearl's version is fairly typical aside from the two Disrupts.

Bearl won the roll and played first. He was forced to mulligan a one-land double-Upheaval draw. His new grip - five land and an Upheaval - was not significantly better, but in this slow match up it would suffice.

On turn 4, Bearl attempted a Nightscape Familiar, but Bing had the counter. He tried another on turn 6, and Bing let it resolve. Bearl then upped the ante with a Standstill, which would leave him with two cards in hand. Bing wasn't up for that, so he Undermined it. Bing then Recoiled the Familiar, forcing Bearl to discard an Island. Bing then dropped his own creature, the Psychatog, and used it's discard ability to facilitate a Circular Logic on Bearl's Fact or Fiction. On Bing's next turn, he Chainer's Edicted away the Familiar and attacked for one.

Bearl, with his back to the wall, had to cast his last spell, Upheaval. Bing had the counter, and things started going downhill rapidly for Bearl. Bing put out a Standstill which Bearl was forced to break with a Fact or Fiction, which Bing Logicked, and after a quick 1.5x + .5y + 1 computation, Bing swung in for the kill.

Bing complained that he didn't like the attention of Feature Matches, so I passed on the advice of "Stop winning." We'll see if he listens or not.

Bing had to mulligan this time. He started the action with a turn-1 Duress, taking one of Bearl's two Gainsays, leaving him with two Circular Logics and a Familiar. The Familiar came into play, but was quickly dispatched with Chainer's Edict.

Bearl had another Familiar on his next turn, and then a Psychatog with Gainsay backup; Bing knew about the Gainsay, but had to throw a Counterspell at the 'Tog anyway, just to try to deplete Bearl's hand.

Bing retaliated with a main-phase Fact or Fiction, which Bearl spilt into "Tog or No?" piles of Cabal Pit, Circular Logic, and Nightscape Familiar vs. two Psychatogs. Bing said no-thank-you to the 'Togs, and put out a Familiar to stop the beats.

He then played his own Psychatog (the third one - how lucky!) and a counter war ensued - Logic, Gainsay, Logic, Counter. The 'Tog resolved.

Bearl's last card was Upheaval, however, so he calmly reset the board. His Familiar fell to Cabal Pit, but his 'Tog stuck, and he was sitting on a pair of Edicts for Bing's Familiar and 'Tog. Bearl drew very well after the Upheaval, and Bing could never stop him. 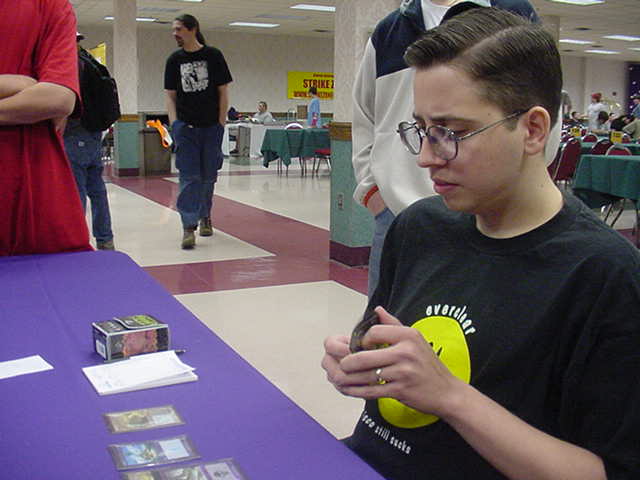 Bing kept a hand with double Coliseum as his only blue sources, but drew into an Island early. He put out a quick Familiar which started attacking for 1. Across the table, Bearl was having mana issues - only three Islands, holding stuff like Fact or Fiction and Chainer's Edict. He had to discard once, then Bing decided to test the waters with a Fact or Fiction. He won the permission was easily, mostly because his Gainsays only cost 1 thanks to "Sexual Chocolate," the Nightscape Familiar.

The Familiar wasn't exactly pummeling Bearl, giving him time to draw black mana. Another counter war ensued over a Bing atog, but Bearl untapped and drew his second Edict, killing the Familiar and the Psychatog.

With no creatures in play, Bing managed to resolve a Haunting Echoes, stripping Bearl's deck of all its Edicts, Circular Logics, Gainsays, Counterspells, and Mana Shorts. The third and fourth Fact or Fictions were not in Bearl's library, however, meaning they were in his hand. The game was not over.

Bearl got one of the FoF's through, and Bing offered splits of Familiar + Upheaval vs. land + 2 Standstill. Bearl kept the former pile. He then FoF'ed AGAIN, and Bing responded with his own FoF. After much splitting and choosing, Bing got a Psychatog to stick. Bearl tried to Upheaval, but with all the permission stripped from his deck, he could do nothing but watch as Bing countered it, then swung in for the kill with the atog.

Justin Bing is now the only 10-0 in the tournament.