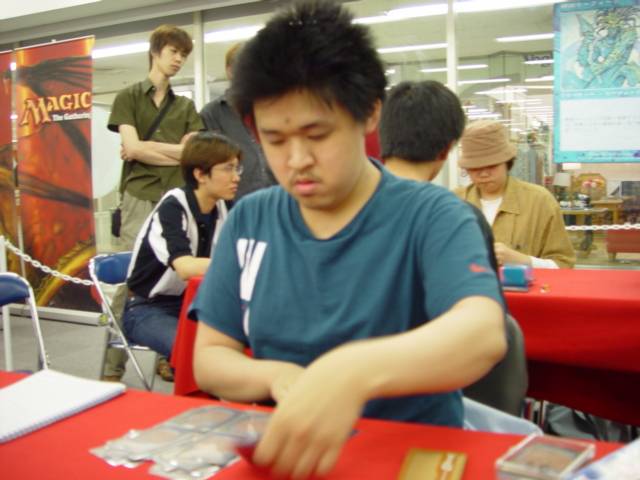 Although he is well-known as a member of the Japanese powerhouse team Panzer Hunter, Momose has been essentially retired for the past three years, coming out only for the Team Masters. He admits to not even owning any Odyssey or Torment cards beyond what he got during the Osaka Masters draft. However, he hopes to return to the tournament scene this weekend with a Top 8 finish. He's certainly on his way to realizing that dream, currently 7-2 and drafting what almost looks like a constructed deck, with multiple copies each of Phantom Nomad and Vigilant Sentry, and a splash of red for some direct damage. His opponent Wakisaka is a well-known player in his home region of Shikoku, although he says this is his first feature match ever. He's playing a GWB deck also with a touch of red. Although he has a lot of powerful cards, he's probably going to have some trouble getting the right mix of lands together to use them.

Wakisaka played first, but it was Momose who made the first move, having a perfect start making full use of his mana curve, playing Angelic Wall, Phantom Nomad, and Major Teroh in quick succession. Having initial drawn nothing but Mountains, Wakisaka finally pulled a Swamp on turn 5. Still, the only thing he could do was make a reactive play, using Patriarch's Desire to remove the Phantom Nomad. Unfazed, Momose rapidly produced another Nomad, and a Vigilant Sentry. Wakisaka attempted to counter, producing a Benevolent Bodyguard and a Mortivore, but at 1/1, the Mortivore was beneath Momose's notice. Making an Aven Cloudchaser, Momose sat on the Nomad and Sentry and took to the air. Unable to draw a second Forest to play any of the cards in his hand, Wakisaka soon went down under Momose's aerial assault.

The second game started out better for Wakisaka, who was able to find all three of his colors quickly, while playing Benevolent Bodyguard and Trained Pronghorn. Momose had a smooth start as well, with Phantom Nomad, Vigilant Sentry, and Cloudchaser Aven lining up on his side of the table. Although Wakisaka was able to increase the number of his creatures with an Acorn Harvest, none of them was individually big enough to pose much of a threat to Momose or his creatures, but the scales got evened out somewhat when Wakisaka was able to use Patriarch's Desire to remove the Sentry. Momose tried to strengthen his defense and shift to attack mode by powering up the Aven with Crackling Club and the Nomad with Unquestioned Authority. Wakisaka got a break, drawing Crippling Fatigue and used to for massive card advantage in a 1-4 trade, then commencing squirrel beatdown. Things got even worse for Momose when the furry monsters were joined by Valor. Momose's deck fizzled out on him, producing nothing but lands for three turns in a row. He was finally able to make another Nomad, but it was too little too late. 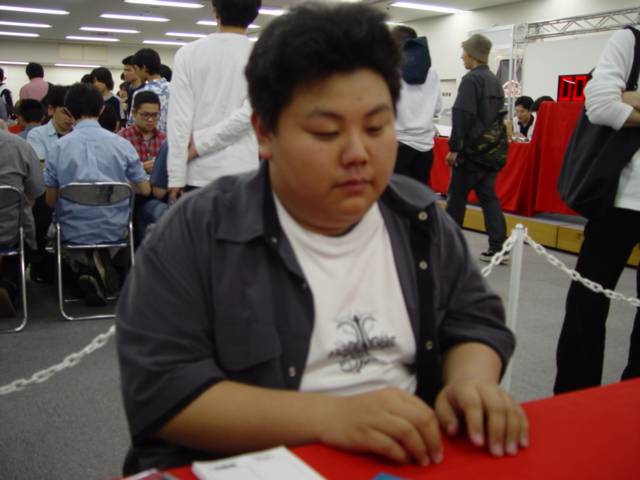 Momose's luck appear to have deserted him entirely when he was forced to take a mulligan. His second hand was also suboptimal, with only one land, but after several moments of anguished internal debate, he decided to keep it. That turned out to be a bad decision--starting with a Ravaged Highlands, Momose wasn't able to draw land for two turns, and when he did, it was a Mountain, which wasn't much help for all the white cards sitting in his hand. Meanwhile, Wakisaka's deck was happily humming along, giving him Trained Pronghorn and Anurid Brushhopper. Momose was finally able to get back into the game on teh sixth turn when he drew a Plains, making a Vigilant Sentry, then burning through the Highlands to make another. Still, he had no answer for the Brushhopper, and was forced to watch his Sentries die one after the other to the fat frog. Wakisaka kept the pressure up with a Mortivore and Phantom Centaur. Unable to draw any creatures or removal, Momose conceded. With an unexpected win, Wakisaka is now one match away from a seat in the Top 8. On the other hand, Momose--a favorite going into the second draft--now has his back against the wall.