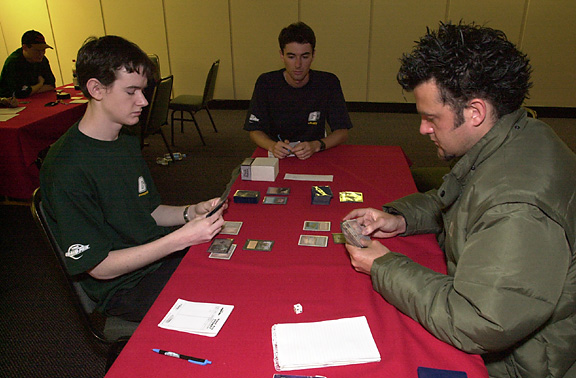 This round 10 feature match placed 2000 Australian National team member Kim Brebach and his countersliver deck against Chris Allen with Trix. They had previously played each other during day 1, with Allen's sideboarded Negators proving the key to victory.

Brebach won the dice role and started with a first turn Duress. A Brainstorm, Vampiric Tutor and Duress were his choices, with the Vampiric tutor hitting the graveyard. Allen also starts his turn with a Duress but only has a Swords to Plowshares to take. An Acidic Sliver hits the table for Brebach to begin the beatdown.

Allen's third turn sees a Necro safely played which he uses to draw 10 cards providing him with 2 Force of Will, 1 Donate, 1 Mox Diamond, 1 Brainstorm and various land. Brebach attempts to cast a second Acidic Sliver which is Force of Willed by Allen, bringing him down to 9 life. Brebach attacks with the Acidic, taking Allen down to 7 life.

Allen really needs to find an Illusions of Granduer to give him a chance of victory. He looks at the next 3 cards with a Brainstorm and sees a Duress and another Force of Will. Allen then does some serious thinking since without an Illusions he won't survive the next two turns. He decides to draw 5 cards with the Necro in the hope that he will draw a Firestorm and an Illusions. He sees a Pyroblast, a Demonic Consultation and various land. With a Badlands and a swamp on the table he still has the chance to get the one firestorm in his deck by using the Consult. When the firestorm is revealed in the first 6 cards he scoops.

Brebach knows that Allen will side out the combo and side in Phyrexian Negators because it worked for him on day one, so simply sides in 3 Pyroblast. Sure enough, Allen side's out the combo for Negators and other cards, including his own set of Pyroblasts.

Brebach elects to play first and draws a hand of slivers but no lands. After a mulligan his opening hand had only one land, but also included a consult and a Duress so he keeps. Brebach opens with the Duress and Allen responds with a consult for a Negator. This meant that a Pyroblast was the only card Brebach could Duress and it goes to the graveyard.

Allen attempts to play the Negator on his third turn, but it's countered by a Force of Will from Brebach. Next it's Allen's turn to Duress, with Brebach responding with a Consult of his own, naming Underground Sea. Brebach is forced to discard a Counterspell. Allen gets a second Consult which he uses to get another Negator, which this time safely hits the table and does some unanswered damage. Brebach responded by playing his own creatures, a Crystalline Sliver on one turn and a Muscle Sliver the turn after.

Brebach is forced to block the Negator each turn to stay alive, and since Allen has plenty of land on the table doesn't suffer much. Brebach could only draw a Winged Sliver to keep himself alive for one more turn, but then dies to the Negator beatdown, keeping the game tied at 1-1.

The third game sees Allen mulligan after drawing only land and Mox Diamonds. Brebach keeps a solid hand including 2 Slivers, a Force of Will and a Pyroblast. Allen opened with a Duress and chose a Force of Will as the target. Allen's second turn also featured a Duress from Allen, which leaves him a choice of a Disenchant and a Pyroblast. Without much thought he takes the Pyro.

Brebach's next few turns consisted of 3 Hibernation Slivers. The Slivers bring Allen down to 14 life before Allen sees a Necro off the top of his deck. He pays 7 life to halve his life total, hoping to complement his Firestorm with plenty of cards to discard. His Necro draw turns out extra good, netting him a Negator as well as a Massacre. He then simply used the Firestorm to target the 3 Hibernation Slivers and his opponent. Brebach responds by bouncing 2 of the Slivers and takes 4 from the Firestorm bringing him down to 12.

It looks bad for Brebach when a Negator start taking him down faster then he can cast slivers, but when he finally plays a Crystalline and a Muscle it seems as if he could stabilize the board. When Negator number 2 hits the table his fate is almost sealed. Allen wins the match by hard casting the Massacre he drew from the Necro clearing the board of the Slivers for his two Negators to come over for 10.