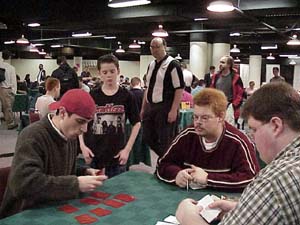 Kyle Rose, the champion of Pro Tour London, found himself paired against friend and Junior World Champion Justin Schneider. Kyle was playing a Blue Black White deck that was sporting bombs such as Distorting Wake, Duskwalker, and Marsh Crocodile, while Justin was playing a Black Blue strategy that not only included two Excludes and two Repulses, but also featured the powerful Phyrexian Delver and Tsabo's Assassin.

After playing a rousing game of "Where's the Island?" (Kyle lost, but he did find the Swamp), Justin opted to play first, drew his hand and kept. Kyle drew his seven, was satisfied, and the first game of this match was underway. After playing land for the first three turns apiece, Justin was the first to cast a creature in the form of a Shoreline Raider. Soon it found itself joined by a Morgue Toad. Kyle on the other hand seemed content with doing nothing for the first four turns. (However, he was mana shy, and he did finally draw his first swamp turn five.) Justin played a Probe with kicker to add more punch to his already dominant board position and soon after that was played all looked lost for Kyle. 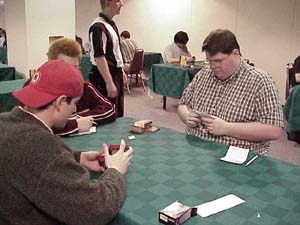 All players are capable of comebacks though, and after working through his tough mana development, Kyle was no exception. A Distorting Wake returned a Phyrexian Delver, Shoreline Raider and a Morgue Toad. It seemed as if the game was quickly turning to Kyle's favor, but it was not to be. After recasting the creatures that were returned to Justin's hand, a Rushing River sealed his win. Kyle scooped while staring at Justin's superior board advantage.

In between rounds, both players were joking around and laughing. Once the shuffling started, the laughs ended, and both players put on their game faces.

Once again, both players started off this game with no mulligan. Kyle opted to play first and both just play lands. Justin starts the pressure with a quick Vodalian Zombie, while Kyle answers with his Duskwalker. After an attempted Repulse on the 'Walker, (Kyle Repulsed it in response to Justin's Repulse.) Kyle keeps up the beats with a Ravenous Rats, which gets a Death Bomb. Upon the recasting of the kicked up Duskwalker, Justin plays his last Exclude. 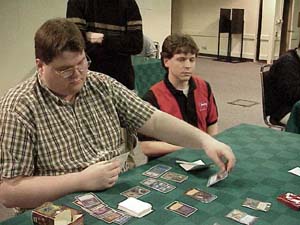 Things were looking good for Justin at this point. Probe with kicker not only made them look better, but also stripped the last two cards out of Kyle's hand. Playing off the top of his library, Kyle stalls out and is not able to keep up with the amount of threats Justin keeps playing. Justin's last turn sees Mourning on a Stormscape Familiar, and after declaring his attack phase, Kyle extends the hand, and accepts the defeat.

Final Result: Justin Schneider wins the game, and the match, 2-0.