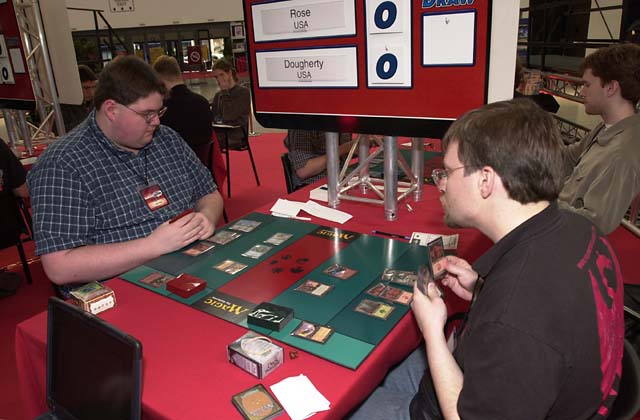 These players are very well known on the Pro circuit, both having won a Pro Tour in the past (Kyle in London, and Rob in Washington), but were already out of the running for the Top 8. Rob's record was 5-3-1, and Kyle was 5-4.

Rob played a first turn Thunderscape Apprentice that traded with Kyle's Kavu Aggressor before bring Recovered and replayed. Rose started some aerial beatdown with a Tower Drake followed by a Metathran Aerostat. Dougherty played Treva's Attendant and he joked about the poor quality of the cards in his deck. "Treva's coming", he joked, with lands in play of Mountains, Swamps, and a Forest.

Kyle continued to attack with his flyers and played a Phyrexian Bloodstock. Rob used Plague Spores to kill the Aerostat and Rose's only Mountain. However, the Virginian had another Mountain in hand, and used Tribal Flames to clear the Attendant out of the way for another attack. This brought Rob down to nine, and he summoned Rith's Attendant this time. 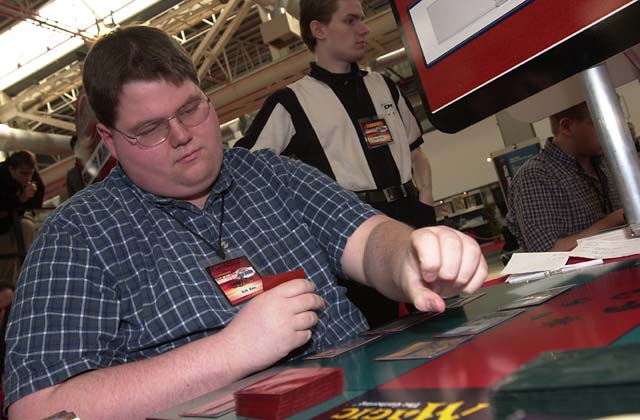 The Tower Drake hit again, and Rob played Planeswalker's Scorn, revealing that Kyle only had an Island in his hand. Rose drew an Allied Strategies, possibly not the best card when his opponent had Scorn in hand, but after Kyle drew four cards, Rob missed again revealing a Mountain this time.

Kyle did have spells in his hand, though, as he showed when he cast Rainbow Crow and Caldera Kavu on his next turn. Dougherty missed for a fourth and fifth time with his Scorn, and conceded.

Kyle was forced to start and he had to take a mulligan. His six card hand was better, with a second turn Rogue Kavu, followed by a third turn Caldera Kavu. The Your Move Games player had a third turn Morgue Toad, which of course didn't block the Kavu. 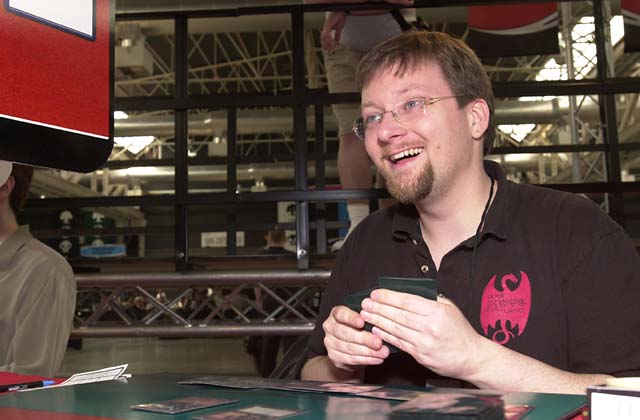 Rob was down to fifteen and Kyle added a Tower Drake. Dougherty was stuck on three lands and took another hit from the Kavu and Drake putting him one ten before he drew his fourth land. He attempted to Zap the Tower Drake and Rose responded by using Rushing River on the Drake and the Morgue Toad.

Another attack put Rob on six. Kyle replayed the Tower Drake, and Dougherty replayed his Morgue Toad, along with a Thunderscape Apprentice. When Rose used Recoil on the Toad in his next turn, Rob was forced to chump-block, but was killed immediately after the attack by a three point Tribal Flames