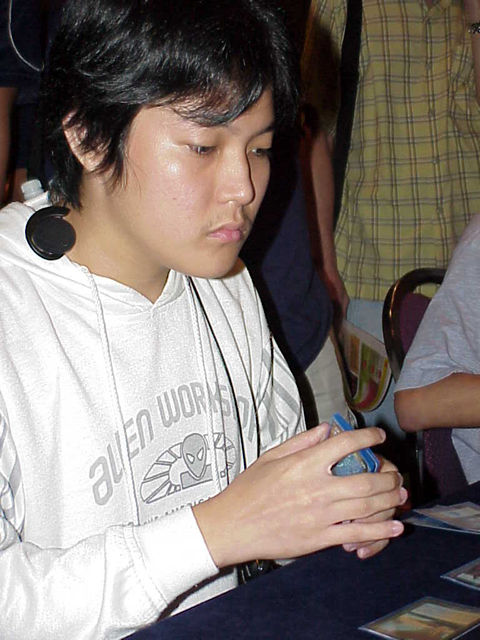 This match was held in place while its participants waited to pass their deck checks. They started sweating as the ten-minute mark came and went, but nothing was amiss. They shuffled up and were awarded fifteen extra minutes. Their late start also meant they had their fair share of spectators, and vocal ones at that.

Yeong opened with a Goblin Legionnarie. Cher tried to match him with Gaea's Skyfolk, but Yeong was ready with Urza's Rage. Not to be outdone, Cher showed a Rage of his own. Yeong missed his land drop, but minimized the damage by Icing one of Cher's islands. This not long scored him his fourth land, but paved the way for a Lightning Angel.

Cher Repulsed it next turn during combat to spare himself some damage, but it was free to enter play again. A mainphase Prophetic Bolt from Cher dealt with it permanently. This gave Yeong another window, but still at four land and only one white source he was stuck for options. He made a Meddling Mage to blot out Mystic Snake and passed the turn.

Cher's response was impressive: a kicked Kavu Titan. Yeong could only muster Galina's Knight. He took five from the incoming beast. He untapped, and saw no recourse but to try a mainphase Fact or Fiction. Seeing his mana shortage, Cher put Coastal Tower with Fact or Fiction and Fire/Ice, apart from two islands. Yeong took the pile wihth white mana, and passed the turn.

Another swing from the Titan and he was at seven. Yeong tried another mainphase Fact or Fiction. This time he got Battlefield Forge and island over Prophetic Bolt, Galina's Knight and Lightning Angel. He had more than enough goodies in his hand, he just needed the means to get at them.

Yeong played the island and Iced the Titan to buy some time. He untapped and dropped a second Meddling Mage, protecting it from Exclude with Absorb, but only gaining one thanks to his painlands. The Mage stopped Urza's Rage from ruining his day.

Unfortunately, Cher's Titan wasn't idle. It smashed again, knocking Yeong to three. Prophetic Bolted Cher, and played out a Galina's Knight. The three bears gang-blocked to take out the Titan, but both Mages were lost in the process. Cher replaced the Titan, which knocked the wind right out of Yeong's sails. He wasn't out of it, yet, however. He aimed a second Bolt at Cher's head, and Absorbed his Mystic Snake. Now he was holding Urza's Rage at four life, just enough to chump with his Knight and soak the Titan's trample damage. If Cher was out of gas the game was his.

Cher slid his top card across the table and pounded it. He turned it over. The crowd went wild. It was Prophetic Bolt, and the first game was his.

Afterwards Yeong realized he could have won if he'd played differently. He could have blocked the Titan with the Rage-stopping Mage and the Knight, fallen to one life, and then Prophetic Bolted and Raged without fear of Mystic Snake. He was hesitant to make this play, because if Cher had Repulse or something similar, he was sure to lose. He realized after that if Cher had anything, he was going to lose anyways.

Yeong shook it off, and Opted into a perfect three color draw in game two. He was, however, staring down an unkicked Titan and a Blurred Mongoose. Lightning Angel showed up just in time to turn things around. Cher swung with both his creatures, and the Angel took down the Mongoose. It turns out it was just a bluff, and Cher passed the turn back leaving the Angel alive.

Twice more the Angel struck, and Cher was unable to stop it. He made a second unkicked Titan and Gaea's Skyfolk, stuck at four land. Yeong undid his progress with a kicked Jilt, then made a second Angel to bring the pain. Cher didn't need any more convincing to scoop.

After the marathon first game, the second was a breath of fresh air. The deciding game had but ten minutes to run its course. Time had run out on the rest of the tournament, so now spectators lined the Feature Match Area.

Cher kicked off, and made a second-turn Titan. Yeong's Shivan Reef hurt him as he tried to Opt into more land, and again when he made a Meddling Mage to stop Repulse. It took down the Titan on the next attack.

Cher had no play on his turn, but kept Yeong off white mana with Ice. Yeong returned the favor, and then so did Cher. They were too busy messing with the other's mana to make dudes to smash face. Again Cher had no play, and Yeong Iced to keep him off Mystic Snake. 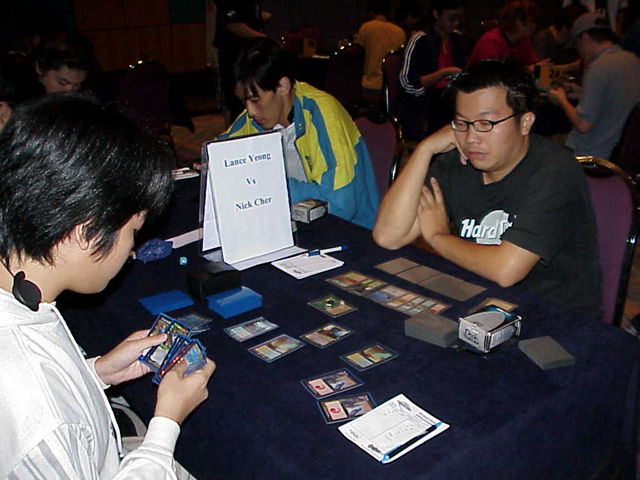 Finally, Yeong made a play: Goblin Legionnaire. Cher Repulsed and untapped, but continued his dispassionate stance, passing the turn back. Yeong recast the Legionnare, and added Galina's Knight to his team. Cher turned the tables with a kicked Jilt, putting the Knight in the graveyard.

Still, Cher couldn't move forward, only defend. He Excluded Goblin Legionnaire, but that only cleared the way for Yeong's Goblin Trenches. The clock was running out fast. Yeong made two dudes and swung, but had one of them Repulsed. The other fell to a Flametongue, and when Yeong tried Prophetic Bolt Cher was ready with Mystic Snake. It was a good board position, but not great, considering the Trenches.

Yeong tried a different tack. He made a Lightning Angel and a Meddling Mage to stop Flametongue Kavu. Prophetic Bolt took care of the flier, and the Mage took down the Flametongue in combat. The players had been moving like quicksilver, and they couldn't slow their pace even after the judge called time.

Yeong decided not to blow up all his lands for creatures, instead going for a second Angel. Cher had the Gainsay. And now it was clear that neither had the time to win. They both held too many answers for the other. Urza's Rage and Jilt with kicker made sure neither had enough forces to swarm for the win. The match ended in a draw.