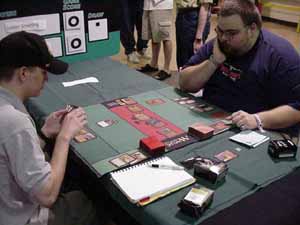 Both Lester Smerling and Paul Hollar are sitting pretty at 8-1. Hollar hails from Kentucky, and insists there isn’t anything noteworthy about himself. Smerling was similarly tight-lipped, but his fellow Wisconsinites were quick to call him one of the nicest guys you’ll ever meet. He fielded seven of the decks for this Grand Prix, cards, sleeves and all. He’s yet to find major tournament success, though.

Smerling accelerated to a turn-two Warchief with Skirk Prospector, but Hollar had the perfect response in a turn-two Silver Knight. Smerling was stopped dead in his tracks. He made a Goon and passed the turn. Hollar dropped a third land and played the waiting game.

Smerling cycled a worthless Gempalm Incinerator, then summoned Sparksmith and Goblin Sledder before passing it back. Hollar gained two off a cycled Renewed Faith. He played a fourth land and passed his turn. Smerling wasn’t out, though. He dropped a Siege-Gang Commander and swung in with all but the Commander himself. Hollar cycled Decree of Justice for an extra blocker, putting the token in front of the Goon and the Knight on the Warchief. A token took a dive to keep the Warchief alive, and Hollar took four, falling to sixteen. 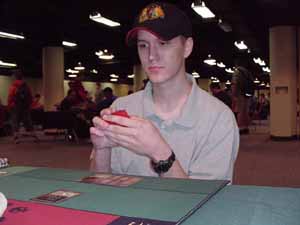 He untapped and didn’t like any of his options. He tapped out for Exalted Angel. Smerling was happy to take seven to Sparksmith it away. His whole team hit the Red Zone. The Knight blocked the Goon and Hollar fell to nine. Smerling added a Skirk Prospector. Hollar wasn’t so naïve to hope that Dawn Elemental would be enough. Smerling found the “attack with everyone” play.

“I want everyone to know that we’re in the presence of a Wisconson Magic legend.” – Brian Kowal

Hollar tried not to betray his excitement about having a turn-two Silver Knight in the second game. While Smerling had only a pair of Prospectors, he made a second Knight. Smerling came down with Sulfuric Vortex. Hollar held back. Smerling made a Goon, and Hollar took care of the Vortex with Wipe Clean.

Temple of the False God was just what Hollar needed on turn five, enabling his Exalted Angel. While Smerling played a fifth land and did nothing, Hollar suited up with Dragon Scales and started to win in earnest. Smerling played a sixth land and tried to look interested. Two turns later it was over.

“You only had two Silver Knights that game. I thought it was four from the laugh.” – Lester Smerling

“It was enough.” – Paul Hollar

“This format needs Fireball. Or Anarchy! Something to make it fair.” – Lester Smerling 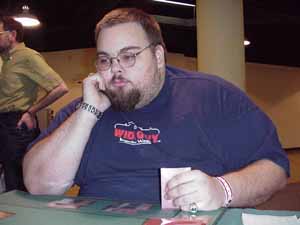 Hollar had to mulligan his first hand, but kept his six. Smerling opened the game with Goblin Piledriver.

“Hey, you do have those in there.” – Paul Hollar

Hollar played his second land, but his Silver Knights had left him high and dry. Goblin Warchief meant he took five right away. Hollar untapped and drew, then played a Secluded Steppe. Smerling just smiled, knowing he needn’t fear Wing Shards. He untapped, then threw down a second Warchief and another Piledriver, swinging into the Red Zone to take the game with style.