Round 10 Feature Match - Maioli vs. Alvarenga 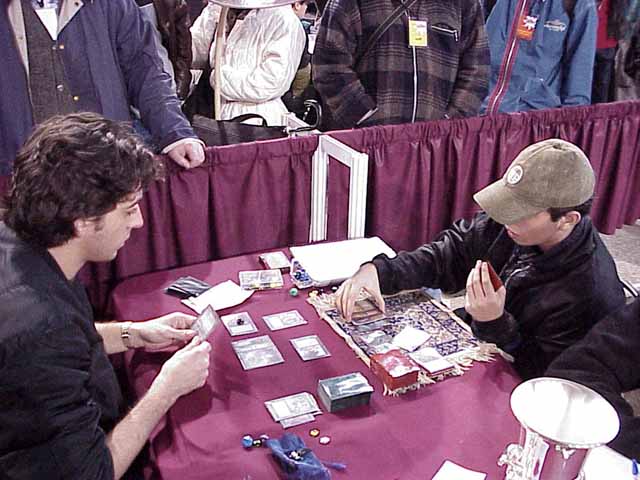 In the feature match for the tenth round, Douglas Maioli (6-2-1) of Buenos Aires played Rafael Alvarenga (6-2-1) of Rio de Janeiro. Tensions were high in this rematch of the finals of Grand Prix Saõ Paulo. Douglas was playing a Flores Control Black deck, while Rafael's deck was Replenish.

The first game started out great for Douglas, who began with swamp, Ritual, Phyrexian Negator. He then followed up with a Duress to remove Rafael's Wrath of God, and on the next turn he cast Skittering Horror. But Rafael was cool, calm, and in control, feeling the pressure but handling it like a pro. He cast Attunement with a knowing smile on his face. On his next turn, he was at one life, but he Attuned into a Replenish, bringing Parallax Tide, Wave, Attunement, and Lilting Refrain into play.

By removing all of Douglas's permanents with his Parallax cards, Rafael assured himself some breathing room. When Rafael topdecked Opalescence on the next turn, Douglas decided he'd had enough and conceded the first game.

Game two was a game of tutors as Rafael used Mystical Tutor to get Enlightened Tutor, and Enlightened Tutor to get Attunement. Meanwhile, Douglas cast Vampiric Tutor to search for some sideboard tech: Stromgald Cabal. Tangle Wire slowed down Rafael's development, and he was taking some serious damage from Phyrexian Negator. He filled his graveyard with an amazing array of enchantments, but the Cabal destroyed his hopes of getting them into play.

Rafael cast the game-winning Replenish anyway, hoping that Douglas would forget to counter. No such luck. Rafael conceded the second game.

The third game followed a pattern similar to the first, with Negator racing unsuccessfully against Attunement. Rafael cast Replenish and countered Douglas's Rapid Decay. The CoP: Black, Parallax Wave, Attunement, and Opalescence that Rafael brought into play assured his immunity from damage. Using the Attunement as a Blinking Spirit, he began to ruthlessly attack Douglas, whose Negator served a suboptimal blocker. Douglas conceded when a second Replenish hit the table, and Rafael Alvarenga won the match 2-1.