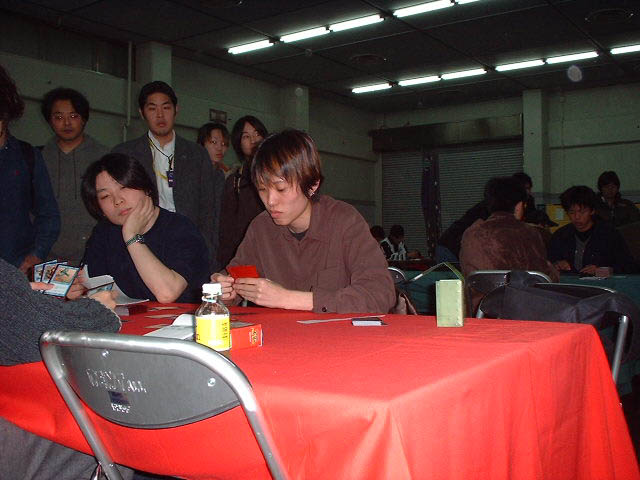 This match-up saw back-to-back APAC Champion Masaya Mori face off against two-time Japanese National Champion Toshiki Tsukamoto. This match was vital as the winner ends up drafting in pod 1 and consolidating his hopes for top eight. Tsukamoto is playing mainly black/blue but has a splash of red and white, Mori playing white/green/red aggressive beatdown.

Mori's first three turns see him play Utopia Tree, Thornscape Apprentice and Benalish Trapper. Tsukamoto starts eating away at Mori's hand until the Trapper taps down the Hypnotist in the upkeep. The Hypnotist can only use its ability as a sorcery, thus Mori could prevent the loss of valuable card advantage. 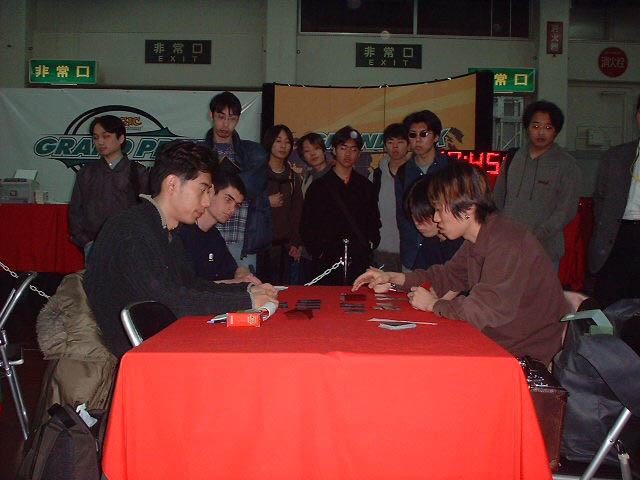 Mori cast the 4/4 Serpentine Kavu on turn five and Armadillo Cloaked it the next turn. Tsukamoto thought that he was going to be safe from the Kavu as he had Shoreline Raider, but the Armadillo Cloak trampled over the top. Soon the tappers were shutting down the Shoreline Raider and the cloaked Kavu finished the game quickly.

Game two looked like it was going to end by turn six. Mori's 2nd turn Yavimaya Barbarian was given Strength of Unity making it 5/5 on turn four and further pumped up by a Maniacal Rage on turn five making it 7/7. It was looking very grim for Tsukamoto as he once again had Vodalian Hypnotist but was under too much pressure to take advantage of the discard ability. The barbarian took Tsukamoto to eight life, until he topdecked a Plague Spores, removing Mori's only white source of mana as well as the 7/7 barbarian.

Mori had no other creatures, drawing and playing a Utopia Tree the next turn, which did help out his mana problems. The game had now settled to the pace where the Hypnotist can control the game and Mori was forced into top deck mode. The turn after Mori hit six mana he did topdeck Sabertooth Nishoba, with Tsukamoto now on five life, the pressure was back on. Through a combination of Exotic Curses, chump blockers and Yawgmoth's Agenda, Tsukamoto was able to hold out while Phyrexian Slayer, and Hooded Kavu slowly but surely reduced Mori's life total to zero. 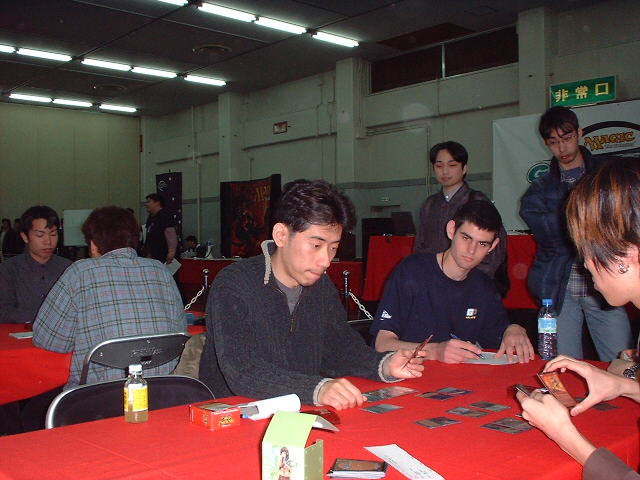 The third game was a race against the clock, with only ten minutes left to complete the round. Mori started and played a 4th turn Viashino Grappler, Maniacal Raging it on turn five. Tsukamoto had cast Vodalian Serpent on turn four in anticipation of blocking the Grappler, but the Maniacal Rage put a stop to that plan. Tsukamoto's next play was Phyrexian Reaper, which Mori Stunned allowing his raged Grappler to get through for another five points of damage.

The Vodalian Hypnotist hit the table again on turn six but was not going to stop Mori's next turn Sabertooth Nishoba and then Serpentine Kavu with haste. This was too much fat with Mori winning the match just as time was called.