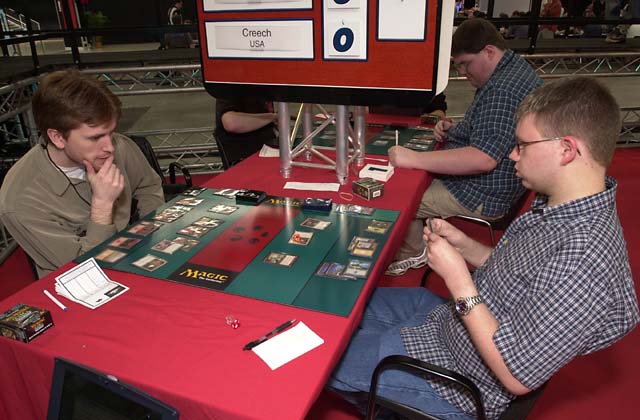 Contrary to any rumor you may have heard, The Sideboard is not featuring Lawrence Creech in hopes of sabotaging his career. The Rookie of the Year leader doesn't see it that way. He is 1 for 5 in games his two previous Features. That's got to be good news for his opponent, Matt Place, the Ghost of Pro Tours Past.

The air of doom thickened as Creech mulliganed. He spread his six cards onto the table and picked them up one at a time, saying: "That's a good one. THAT's a good one. I'm keeping this."

Creech played first, summoning Tidal Visionary. Place made an Apprentice, and the two traded. Creech had another, and Place dispatched it with Assault. This left him unable to stop Creech gating in a Silver Drake via a Benalish Lancer.

Place brought out a Mire Kavu, and Creech decided to race it. However, he held back on his Lancer, wanting it to hit play as a 4/4. He took a hit from the Kavu, but was given cause for alarm when Place dropped a Nightscape Familiar and a Kavu Runner. Next turn, he was forced to trade his Silver Drake for the Mire Kavu to stay at a healthy life total.

He traded his Silver Drake for the Mire Kavu, and Hobbled the Runner on his next turn, thinking he had things under control. Place drew and said "This is why I'm 0-2", showing a plains to go with his swamp and mountain. The unorthodox color combination gave him a Benalish Trapper, and a turn later, a Glimmering Angel to go on offense.

Creech summoned an Alloy Golem to stop the Trapper, forcing through lethal damage. Place added a Kavu Recluse to his army. Creech made a Voice of All, but had to make it Pro-White to hold the fort. Place's Trapper forced a Recluse through for 2, as Creech didn't want to lose his Voice.

Place held back for a turn, then cleared the way by tapping Creech's Golem during his end step and his Lancer during his main phase. A kicked Magma Burst left Creech defenseless. He scooped before Place could get to the combat phase.

The two matched creatures in the early turns of Game 2. Creech led with a Visionary and Place matched him with a Benalish Trapper. Creech made a Benalish Lancer, and Place answered with Morgue Toad. Creech's kicked Ardent Soldier didn't look so good next to Place's Mire Kavu, but he made a Galina's Knight. Kavu Runner, Thunderscape Apprentice and kicked Pouncing Kavu brought the board complexity to a fever pitch. 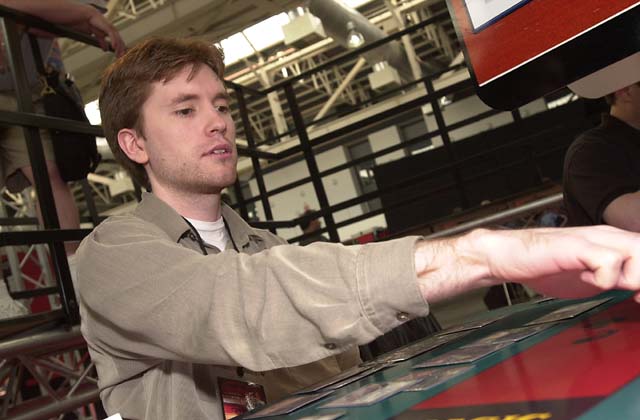 Creech enchanted his Ardent Soldier with Wings of Hope, making a formidable weapon. He removed the only opposition, the Trapper, with a kicked Magma Burst, also destroying the Mire Kavu.

Place removed the Visionary with Exotic Curse and passed the turn. Creech added to his air force with a Pro-Black Voice of All.

When Place tapped six mana, Creech asked "Plague Spores or Demise with kicker?" It turned out to be the latter, blowing up the Soldier that was ending the game in a hurry. Still, Place was having trouble breaking through Creech's defenses.

He did manage to catch Creech once, surprising him by using his Kavu Recluse to power up his Thunderscape Apprentice, but in the end it didn't really matter. Without an answer to the Voice of All, Place died three turns later.

Creech mulliganed into the broken Visionary draw again in Game 3. He gated in a Silver Drake on his third turn. Place played a Viashino Grappler and hoped that Creech would forget about the Visionary in his hand.

Creech was too busy making Benalish Heralds and sending with his Drake. This let Place attack with the Grappler, as Creech wouldn't risk his Heralds in combat. He added a Kavu Runner to his team. Creech shut him down in a hurry with Hobble on the Runner, and a Visionary ready to sucker punch the Grappler.

They traded next turn. Place put an Exotic Curse on the Heralds, but only one of his four lands was basic. He had out mountain, Treva's Ruins, Irrigation Ditch and Urborg Volcano, a pure five-color special. 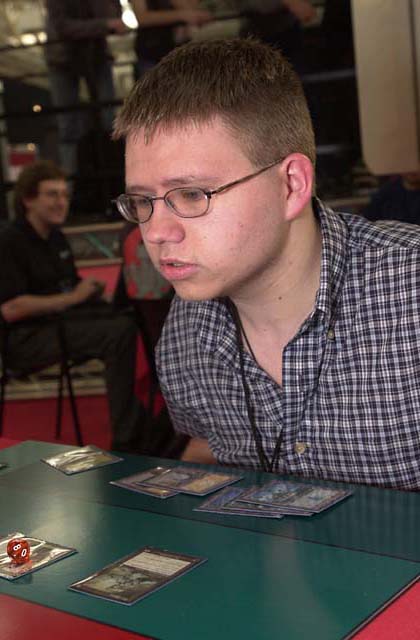 Creech played an unkicked Ardent Soldier, leaving mana up to activate his Heralds, and watched as Place played a Crosis's Catacombs and responded to the trigger with Magma Burst, sacrificing the Catacombs and Irrigation Ditch. This left Creech with just the Soldier.

Creech sent it to the air with Wings of Hope. Place cut it down to size with another modest Exotic Curse. He then played his third lair of the game, Dromar's Cavern, and got a Glimmering Angel. Creech sat there. Place played Halam Djinn. Creech complimented him on it. After playing his tenth land, he flashed the two in his hand to the spectators.